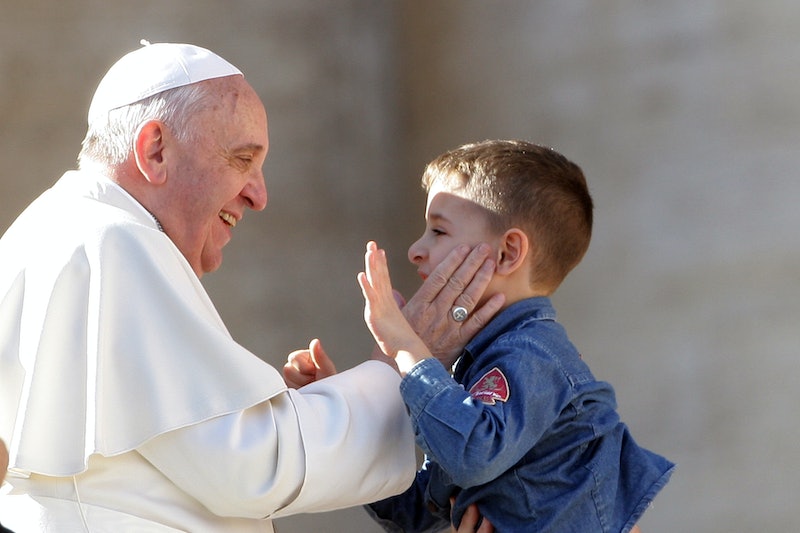 Pope Frances ruffled some vestments at the Vatican this week when he proposed that parents — specifically, fathers — could physically punish their children with "dignity." The pontiff's words riled up a few Catholics and non-Catholics alike, but now it looks like he's receiving some dissent from inside the Vatican halls: The Vatican sex abuse commission condemned Francis' corporeal punishment statements on Saturday, publicly criticizing the much-beloved pope at a press conference.

The Pontifical Commission for the Protection of Minors and Vulnerable Adults, led by Boston Archbishop Cardinal Sean O'Malley, held a press conference to discuss its progress in protecting minors from predatory priests. But Commission member Peter Saunders, a survivor of priest sex abuse, also urged Francis to reevaluate his endorsement as hitting children as punishment, saying:

It might start off as a light tap, but actually the whole idea about hitting children is about inflicting pain. That's what it's about and there is no place in this day and age for having physical punishment, for inflicting pain, in terms of how you discipline your children.

Saunders added that Francis' recent comments were out-of-touch, considering that "millions of children around the world are physically beaten every day."

According to the Associated Press, commission member Dr. Krysten Winter-Green publicly agreed with Saunders. "There has to be positive parenting, in a different way," Winter-Green said.

Francis shockingly came out in support of corporeal punishment for children on Thursday during his weekly general audience address at the Vatican. This week's address focused on the role of father's, and Francis provided this little anecdote:

One time, I heard a father in a meeting with married couples say ‘I sometimes have to smack my children a bit, but never in the face so as to not humiliate them.'

"How beautiful," the pontiff added. "He knows the sense of dignity! He has to punish them but does it justly and moves on."

The Vatican said that while Francis certainly doesn't condone violence, parents punishing their children with smacking is an issue of helping someone mature. Rev. Thomas Rosica of the Vatican press office told The Guardian in an email:

Who has not disciplined their child or been disciplined by parents when we are growing up? Simply watch Pope Francis when he is with children and let the images and gestures speak for themselves. To infer or distort anything else … reveals a greater problem for those who don’t seem to understand a pope who has ushered in a revolution of normalcy of simple speech and plain gesture.

In the meantime, the Vatican's sex abuse commission, which was instated by Francis as a way to crack down on abusers and their enablers within the Catholic Church, announced new programs and guidelines that will help improve child protection services worldwide. These initiatives include creating a line of contact between bishop conferences, religious superiors and sex abuse survivors. The commission, as well as Francis, has also called on bishop conferences worldwide to create guidelines or handling cases of sexual abuse of minors, which will then be vetted."There is a determination that what happened to me and others will not happen again," Saunders told reporters. Images: Getty Images