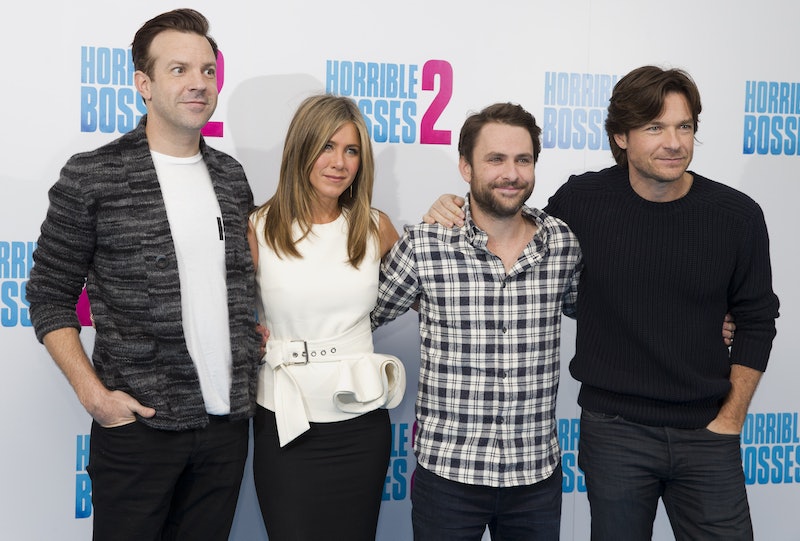 Honest confession right now: I did not think I was going to like the 2011 film Horrible Bosses . However, upon actually watching it, I was shocked to find that I could actually not stop laughing the entire film because it was, truly, too hilarious. In retrospect, I guess I should have expected it — with a cast like Jason Sudeikis, Charlie Day, Jason Bateman, and Jennifer Aniston, how could the movie not be good? Unsurprisingly, the sequel that followed in 2014, Horrible Bosses 2 , managed to be just as great. That said, now that it's been a few months since Horrible Bosses 2 hit theaters, I have to wonder: With the great success of the first two films, will there be a Horrible Bosses 3 in the works any time soon?

Sorry to say, guys, but apparently the answer to that is just a big, fat "maybe": According to various sources, there has been no official confirmation of a Horrible Bosses 3, so its impossible to say whether or not another sequel to this franchise is really in our futures.

That said, the news isn't all bad, though: On the bright side, there is no denial of another sequel either. Plus, Jennifer Aniston has stated that she's actually into the idea of another Horrible Bosses sequel, and, I don't know about you, but I feel like Jennifer Aniston is the kind of woman who gets what she wants. So, this could a very promising sign when you think about it.

Making the possibility seem even more likely, it's apparently not just Jennifer Aniston who is into the idea, either: According to this report from the UK's London Evening Standard, Aniston was on a plane with the rest of the Horrible Bosses cast just this past November, and, hilariously, they all basically convinced/forced Sherlock star (and Tumblr king) Benedict Cumberbatch into joining a third sequel of Horrible Bosses.

For now, there may be no official word of whether or not we'll get a Horrible Bosses 3, but hey — let's be real. If Jennifer Aniston, Jason Bateman, Charlie Day, and Jason Sudeikis want to make a movie and they get Cumberbatch interested, how could it not get made? It's just logic, guys!