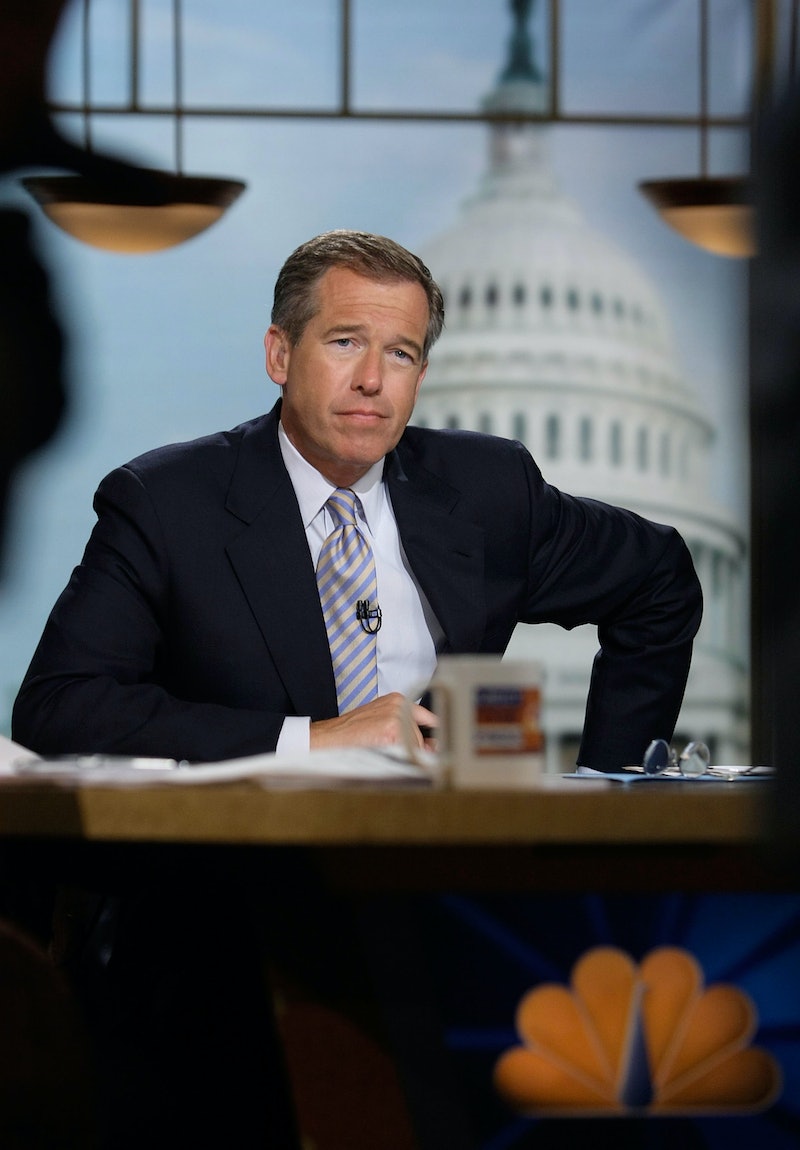 We've all been waiting for the other shoe to drop, and now there's finally been some motion. According to the man himself, Brian Williams will temporarily step down from NBC Nightly News, taking off "several days" amid growing scandal over his false, embellished stories of coming under rocket-propelled grenade fire in Iraq. The situation has already badly marred Williams' long-running tenure as perhaps America's most recognizable, national newscaster, raising serious questions about his credibility and professional ethics. Now, it seems as though the intensity of the controversy is forcing him to step aside — for the time being, at least.

The scandal seemed to come out of nowhere, given the age of the story — Williams has been apparently recounting and tweaking the dramatic account for years, creating a track record that's now being devastatingly used against him. The truth appears to be that Williams was riding in a different helicopter from the one that came under attack, but that's not what he was saying as recently as Monday — in a segment honoring a former U.S. Army soldier involved in the incident, Williams again pushed the false tale that "the helicopter we were traveling in was forced down after being hit by an RPG." It's awkward to witness in retrospect, especially contrasted against his subsequent, on-air apology, forced after the soldiers he actually rode with challenged and decried his story.

Now, in a spare, no-frills statement that went up on the NBC News website Saturday, Williams says he's stepping aside for a while, conscious that he's become "part of the news." As for any thoughts of a resignation, however, he's not tipping his hand — he referred to his return to the airwaves as a matter of fact, not an uncertainty.

In the midst of a career spent covering and consuming news, it has become painfully apparent to me that I am presently too much a part of the news, due to my actions. As Managing Editor of NBC Nightly News, I have decided to take myself off of my daily broadcast for the next several days, and Lester Holt has kindly agreed to sit in for me to allow us to adequately deal with this issue. Upon my return, I will continue my career-long effort to be worthy of the trust of those who place their trust in us.

Of course, as far as national news anchors go, Williams hasn't been shy about being "part of the news" in the past, so long as he cuts an entertaining, pop-culturally accessible figure. For years he's been a regular booking on late night comedy programs like The Daily Show and Jimmy Fallon's The Tonight Show, capitalizing on his buttoned-down newsman image and delivery to reasonably good effect. And as it turns out, all that work promoting himself as a funny guy might pay off — as noted by USA Today, his sky-high visibility and relative popularity could be an incentive for NBC to try to work through this, however untenable it seems at the moment.