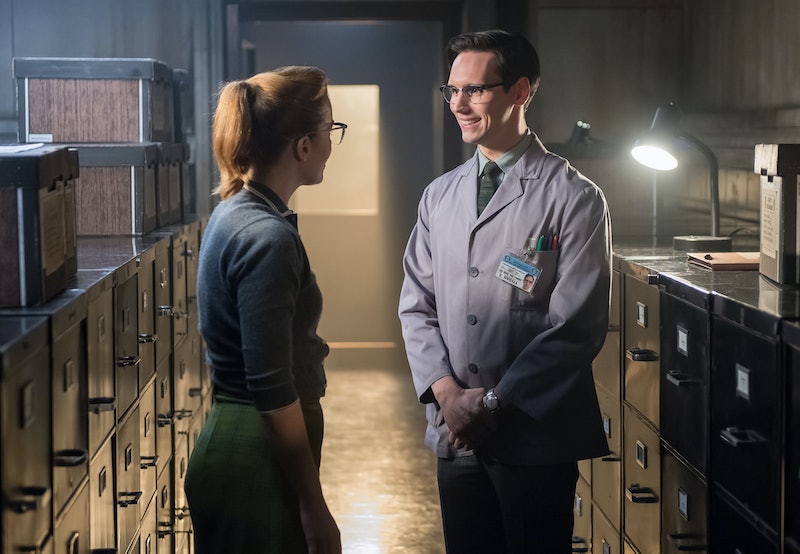 Valentine's Day has come to Gotham with the vengeance of a Red Hood. Imagine my surprise when Kristen Kringle, whose odd choice of work friends at Gotham PD made fun of sweet Ed Nygma, was nice to him in the last two episodes of Gotham! Are Miss Kringle and the future Riddler Gotham's next couple? Detective Gordon is starting fresh with Doctor Thompkins, but jealous Barbara Kean is fresh on his heels. Then, young Master Wayne had a nasty "breakup" with Selina Kyle. We need something young and pure in the romance department on this show.

Then again, are Kristen Kringle and Edward Nygma all that pure? We know that Nygma will become The Riddler, an infamous Batman villain. But he may not be the only one based on a comic book character. I have a theory that Nygma's lady love is Gotham's take on the villain Kris Kringle. Yes, in DC Comics there is an Evil Santa. If you need me, I'll be sipping tea and re-watching Iron Man 3.

Anyway, if these two (literally) crazy kids get together, I won't be mad. They're weird together and I kinda like it. There's no record of The Riddler having a girlfriend in the DC Comics Universe. However, Gotham has the power to change that, and technically he's not Riddler yet. He's just Ed.

Nygma's charming appearances on the show have been making me nervous. I don't want him to become a bad guy! How could anybody make fun of someone so clever? It's terrible. But if Ed and Kristen were in a Bonnie and Clyde type of situation, I could get on board. The crime scene in Gotham City is too old and crotchety. Because Miss Kringle has got to be Evil Santa, right? I'm just saying, Kristen works in the records room. She literally has the ability to make a list of who's naughty and nice and check it more than once. Between her insider knowledge, ability to read people, and Nygma's forensic science genius, the two could make a very dangerous team.

Here's what the actress Chelsea Spack said in an interview with DC Online about her character's feelings for Ed.

The human heart is so complicated. If only things were black and white, it would be so much easier. All I have to say is Edward Nygma drives her crazy. He frustrates her, but there’s something about him that she is intrigued by. I think that it’s something she doesn’t want to admit, and I think she doesn’t quite understand it. You don’t want to tell the cool kids at school that you think the nerdy guy is intriguing, and I don’t think she quite understands it herself. There’s something there that she can’t put her finger on...he cares so much. He truly cares for Kristen Kringle, and he takes things so seriously.

The interview also teased a villainous future and mentioned that in Gotham City, "the line between creepy and charming can be quite thin." And that's exactly why I'm rooting for these two.