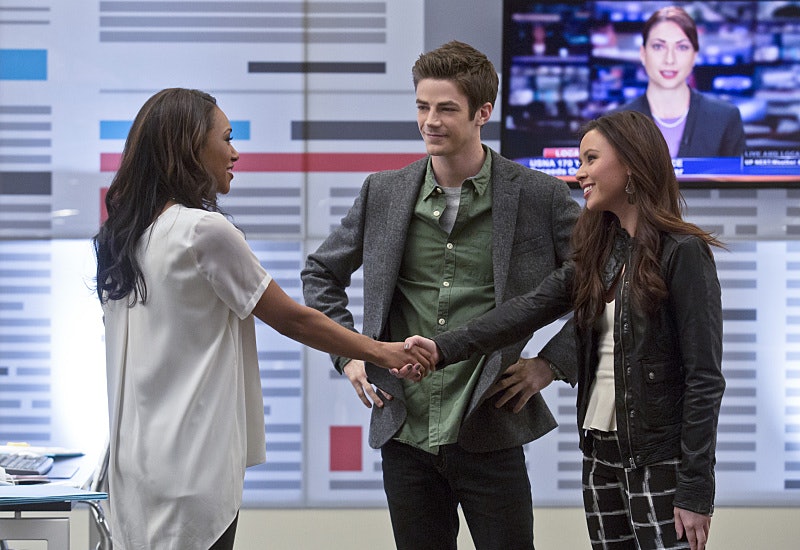 I've got one rule when it comes to dating: if you perform karaoke, and anyone at the bar is still interested in getting to know you after you've stepped off the stage, they're probably a keeper. That's exactly how The Flash introduced viewers to Linda Park during her debut episode. Not only did the Central City sports reporter claim to enjoy our hero's singing, but she made a very obvious pass at Barry and, to seal the deal, she even gave him her digits. So who is this ballsy new lady in Mr. Speedy's life? Malese Jow plays Linda Park on The Flash, but, if you're an observant CW fan, you'll know that this isn't the actress's first time on the network.

As for how long Jow will be sticking around, all we can do is guess. The show seems to have set Barry and Iris up as the ultimate endgame, and Caitlin is also in the mix as another character currently vying for his affections. But, at least for the moment, it looks like Iris isn't into Barry, and Barry isn't into Caitlin. That leaves Linda, who definitely has my vote. She has enough spunk and confidence to inspire the new hero (and she's a female writer, which means I'm pretty much obligated by law to root for her). So if Linda is going to be the new woman in Barry's life, we should probably get to know a little bit more about the actress who plays her, right?

What do you need to know about Malese Jow?

You've Seen Her on The CW Before...

Like I said, The Flash is not Jow's first time in the CW rodeo. In fact, she's practically a veteran of the soapy network, after spending three seasons playing Anna on The Vampire Diaries. She had a forbidden, steamy relationship with the human Jeremy (as both a vampire and as a ghost because this show is nutso like that) before eventually finding peace.

Before landing a role as a blood-sucking supernatural being, Jow started her career in tamer fare, like the Nickelodeon show Unfabulous. She played Geena, a seventh-grader who was into fashion design and hanging out with her best friend Addie (Emma Roberts, pre-Ryan-Murphy-ization). During her Vampire Diaries stint, Jow was also doing double duty on the Nickelodeon show Big Time Rush, starring the real-life boy band.

She Has a Music Career of Her Own

Hanging out with the Big Time Rush boys led Jow to appearing in their music videos, which led to her making an album herself. Though she hasn't released new music recently, you can still listen to Jow's songs on MySpace.

How Long will She Be on The Flash?

If we're going by the comic books, it could be a very long time. A different Flash — Barry's nephew Wally West, who takes over the identity from his uncle — ended up marrying the reporter. Wally's not in the CW Flash, and Iris stills seems have a hold on Barry's heart. But, hey, no need to count Linda out just yet. Stranger things have happened on this show already. Like, you know, the whole "people with superhuman powers" thing.