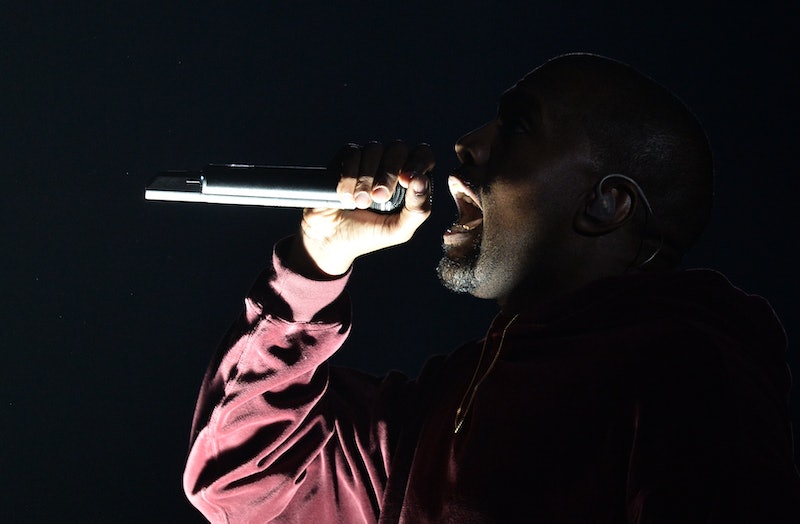 It was almost too good to believe, but at the Grammy Awards on Sunday night Kanye West took the stage for the first time in six years. West boycotted the Grammy Awards after 2009, when 808s And Heartbreaks wasn't nominated for any awards. Still, West is one of the major record holders for the Grammys — he's received 53 nominations and 21 total wins, taking nine awards over the last five years. Though he's had a complicated relationship with the Grammy Awards, he had a change of heart, "heart" being the key word. Kanye, one of the first performances of the night, took to the stage to sing his new song "Only One" which is dedicated to the women in his life: his late mother Donda West, his wife Kim Kardashian, and his daughter North West.

Yeezy appeared on a totally dark stage in a bright spotlight that lit him from below and shot up to the ceiling—and that's it. No dancers, no crazy costumes or masks or sets, which are all in Ye's wheelhouse. But the stark set, and his outfit of just a sweatsuit, were the perfect stripped down accoutrement to his ballad, which was co-written by Paul McCartney. His emotion spoke for itself: Kanye poured his heart into the performance of "Only One," getting especially emotional when he sang the lyrics "Tell Nori about me" — words from his mother.

This performance was all him. Genuine and talented Kanye. He came from a place of emotional vulnerability that we don't often get to see. You could hear his pain and his love through his performance, and even though he was singing to a huge audience, he performed as though it was just him and the spirit of his mother on that stage. As one particular Twitter user noticed, Kanye faces a lot of hate, but he still persists in expressing his emotions and sharing himself with the world. And maybe that's what makes him such a great artist.

And some more pics: