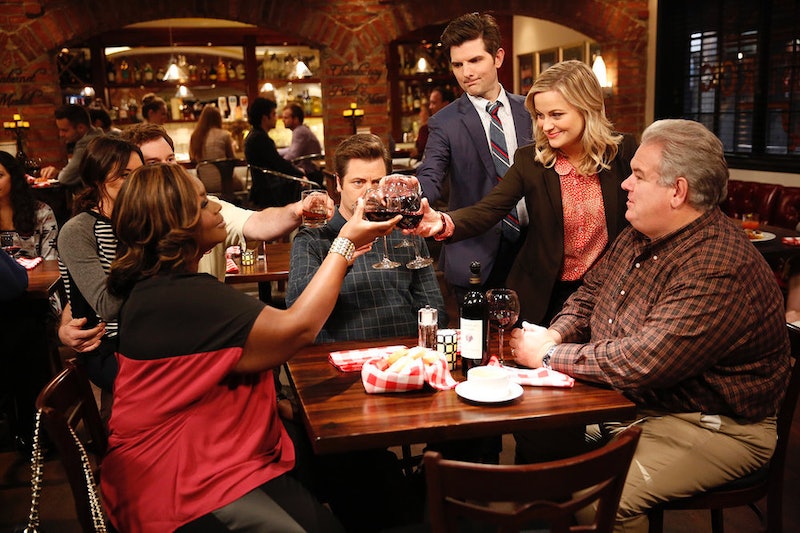 Ah, Pawnee Indiana. It may be more infamous than famous; it is, after all, the nation's fourth most obese city (and also the 76th best place to own a horse). There's going to be a lot to miss about Pawnee after Parks and Recreation goes off the air: the Pawnee/Eagleton rivalry, the waffles from J.J.'s Diner, Jean-Ralphio. But what I'm going to miss most is Pawnee's crazy heritage. It has a very, well, singular history, and loves to celebrate that. Then again, there are some more modern observances the town celebrates annually, too. So, what are Pawnee's best traditions, as shown on Parks and Recreation ?

Pawnee residents wear their pride on their sleeve — as best they can, at least. The first Pawnee Town Slogan was a blustery "The Paris of America," before it got revised down to a little more realistic "The Akron of Southwest Indiana." Still, because they're proud of where they come from (kinda — minus the poor treatment of native people and women, I hope), the town's traditions are important, whether it's something mundane like blathering about nothing at a town meeting, or something more formal like when Leslie married two male penguins at a ceremony at the Pawnee zoo.

With that in mind, here are some of Pawnee's best traditions throughout the ages.

Johnny Karate is just the latest fad in Pawnee's love of fisticuffs. Leslie notes that, in the 1880s, with most of the lawmakers of the town retired or dead, bareknuckle boxing rings spread throughout the region. The love of boxing was even preserved in one of Pawnee's (amazing) Pioneer Hall murals. "The idea of women getting really into boxing men just seemed funny to us, and everyone was behind it," producer Norm Hiscock told Details in an article about the murals. "What I love about the mural is that everybody watching seems really happy and into it. The woman's really going for it — she's pulling his hair."

Because of a misspelling in the Pawnee charter, instead of celebrating the Boston Tea Party, the town held an annual observance upholding the charter's insistence that "citizens shall dump ted into Ramsett Lake." Poor Teds of Pawnee. Each year one was chosen, Hunger Games-style, to get dunked in honor of the tradition. Passions ran high about Ted Party Day; when the Teds of Pawnee tried to change the charter, a "historian" gave the most amazing filibuster ever. (Civic engagement to the point of lunacy is another Pawnee tradition.) Eventually, Leslie found a compromise: now, each year, anyone can volunteer as tribute to be a ceremonial Ted, regardless of their actual names.

Every town has its homegrown dignitary, and Pawnee's is a mini-horse (don't call it a pony) named Li'l Sebastian. In a town that seemed divided on almost everything, Lil' Sebastian was universally beloved, and mini-horse fandom was a citywide past time. Even though he died, he still appears at Pawnee events, like the big Unity concert for the Pawnee/Eagleton merger.

Okay, this is cheating a little. It's not necessarily a Pawnee tradition as much as it is a Leslie Knope tradition. But, given that it's February, it seems appropriate to include. Who wouldn't want to get together with their best (female) friends on Feb. 13 and have breakfast? Basically, I'd celebrate anything as an excuse to have brunch.