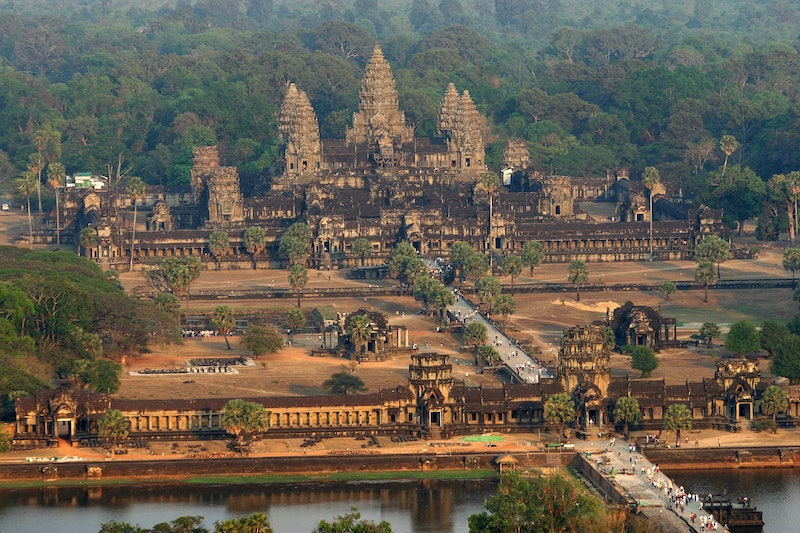 In case you need more proof that tourists are the worst — yes, OK, despite their contribution to the economy and all that — no matter their country of origin, here you go: Cambodia deported two American sisters for taking nudies in temples at Angkor, a historically significant site, home to the largest religious monument in the world, and the center of the ancient Khmer Empire.

Lindsey Adams, 22, and her 20-year-old sister, Leslie, each received a suspended six-month prison sentence on charges of public exposure and making pornographic images, were fined 1 million Riel ($250), and will be banned from re-entering Cambodia for four years, said prosecutor Koeut Sovannareth.

Caught, literally, with their pants down, the Adams sisters were taking photos of their bottoms — an act some like to call "mooning" — inside the Preah Khan temple at the UN World Heritage site on Friday. Kerya Chau Sun, a spokeswoman for the Apsara Authority, the group that manages Angkor Archaeological Park, said their stunt was offensive towards Cambodian culture and was inappropriate at such a sacred site. The organization said in a statement:

[A]fter being questioned over this case, the two tourists had confessed and recognised that they made a mistake by taking naked back photos.

The incident marks the second time in the past fortnight that tourists at the holy site have been caught undressed, reported AFP. Last month, three French men were similarly deported for taking nude pictures of each other in one of the temples. Sovannareth said of the men:

They confessed to making a mistake and asked for the Cambodian people to forgive them for their actions. They said their goal was to take nude photos to keep as souvenirs, but we believe that their intention was to use the photos in publications such as a calendar.

The men were caught in the act mere days after photos of a topless woman in Apsara dancer garb went viral online, outraging officials who vowed to step up efforts to prevent similar incidents. The Phnom Penh Post reported that the spokeswoman Chau Sun said of the topless dancer photo:

When you insult someone’s culture, it’s not art at all.

A symbol of pride for the country, the Angkor temples — also featured on the Cambodian flag — remain a remarkable spiritual and religious monument today, attracting swathes of tourists every year. But many are incensed at the disrespect that some of the visitors show, from littering to vandalism to, yup, taking nude photos at the ancient site.