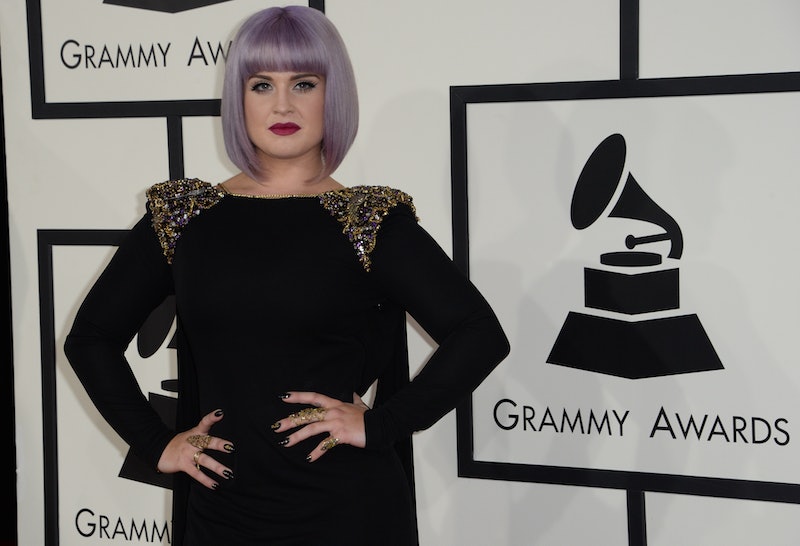 If you've been watching the E! Network on Sunday, then you're well-aware that Live From The Red Carpet is underway. However, before even that pre-show began, there was a pre-pre-show featuring the hosts of The Fashion Police, an appearance which sparked the rumor heard 'round the Internet. For everyone who is wondering, Kelly Osbourne is not pregnant. For everyone who is wondering why I would even have to deny it, this rumor began flying around Twitter when fans watching the E! Network saw Osbourne with her fellow co-hosts and began to suspect that she was showing a bit of a bump. Ironically, Osbourne was discussing Beyoncé's red carpet baby bump reveal at the time, which is probably why fans got confused.

The denial had to come from Osbourne herself, after receiving one too many messages on Twitter of people asking her — with varying levels of rudeness — if she was pregnant. Apparently, according to one person, her dress was a "no no" if she wasn't going for pregnancy chic. (I'm serious, someone really tweeted that to Osbourne.) Of course, in the face of so much negativity, it was not enough for Osbourne to give a simple denial. Oh, no, her statement on the situation was epic.

We all got to know Kelly Osbourne really well just now, but who can blame her? If people are going to poke their nose into her personal life in such a rude, invasive, and mocking way, then she is under absolutely no requirement to be polite back to them. I mean, just take a look at what she had to deal with prior to her tweet.

I don't know about you, but I am giving Osbourne one hell of a slow clap right now. You don't have to like her dress, but I think we could have tried to be a little bit more respectful than to automatically assume an unflattering dress meant that she's pregnant. In her own words, "Suck it."