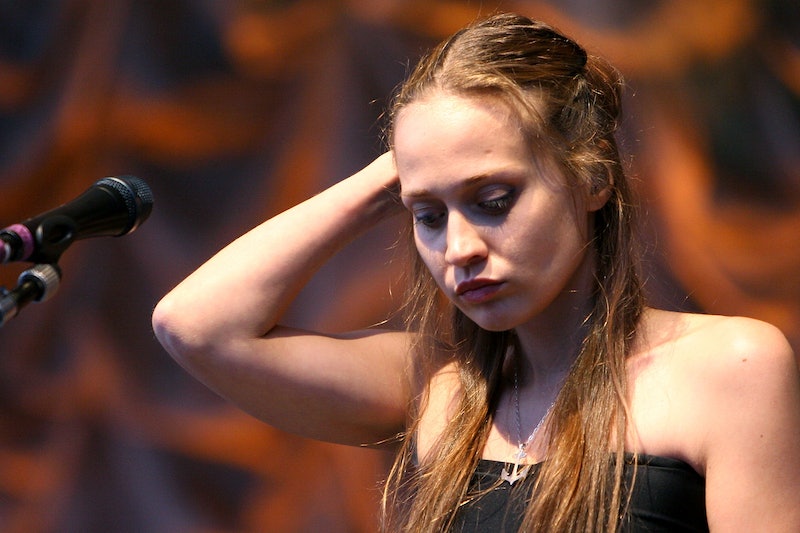 Fiona Apple's tour with musician Blake Mills took a pretty terrible turn when it kicked off in Portland, Oregon last night. According to a first-hand account from Robert Ham for Stereogum, Apple's set was interrupted when a concert-goer, who remains unidentified, yelled at Apple to "get healthy" — as she was mid-performance, no less. Apple, rightfully so, flipped out, and kicked the audience member out before continuing her set. Badass? Pretty much.

Here's what happened: Apple and Mills were about 90 minutes into the set, and had been switching off performing. When Apple began singing, at one point, an audience member yelled the following to her: "Fiona! Get healthy! We want to see you in 10 years!" Now, this is pretty disrespectful, but what followed was worse:

Apple, understandably, looked aghast, then hurt, then furious. She unleashed a torrent of vitriol at the unseen member of the peanut gallery. “I am healthy! Who the fuck do you think you are? I want you to get the fuck out of here. I want the house lights on so I watch you leave!”

As a result of Apple's public, badass sonning, the audience member did leave when the house lights turned on, just as Apple requested. But not before they added one last blow to her appearance: "I saw you 20 years ago, and you were beautiful!" Apple was reportedly fought back tears after, insisted she was "done," then performed an "intense" version of her 2005 song, "Waltz (Better Than Fine)" through sobs.

Ham acknowledges that Apple was looking a bit gaunt (and for the record, goes on to comment than the show was "stellar") but never — never — should one comment in that fashion, especially not during her performance. That's just disrespectful, and I truly think he deserved to be kicked out.