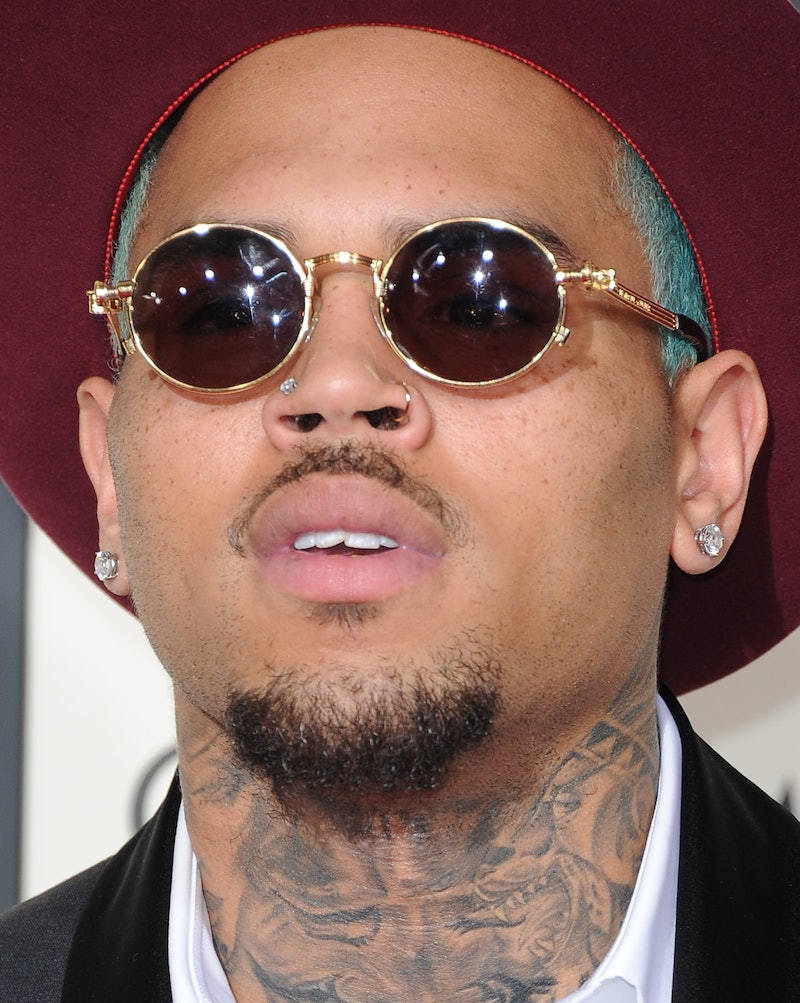 If it walks like a jerk and quacks like a jerk, it's probably Chris Brown. The 25-year-old singer stopped by to talk to Ryan Seacrest on the Grammys red carpet, and he was looking pretty rough. I may or may not have audibly gasped when he appeared on the screen. He was fully decked out when he stopped by to chat about his mural of his idols (which included ... HIMSELF), but I was deafened by the boldness of that hat. And those sunglasses. And his unbuttoned shirt.

His entire ensemble: a tuxedo, unbuttoned, with a rumpled tux shirt underneath, ALSO unbuttoned very, very low. At least he's consistent! But he didn't forget that bowtie — he just slung it untied around his neck. Maybe he's going for an "undone" look, which I wouldn't mind, if his musical career was also "undone" this year.

But it's all the hubbub that's happening on and around Brown's face that's the real concern.

His scraggly beard aside, he also sported double nostril piercings, round Lennon glasses, and a burgundy wool fedora, with his blue hair peeking out from under it. I can't decide what's the worst of it, but maybe it's because the whole is greater than the sum of its parts and it's all colliding in a stunning display of eew.

A few things I'd like to say to Brown: Kate Hudson wore those glasses better on the cover of Almost Famous. Who wore the big red hat better: Brown, Carmen San Diego or a Reddit troll? Brown looks like the guy who would corner you at a party and try to give you one of his CDs. The only thing more repulsive than his outfit is the fact that he still has a successful career despite being a horrible person. BOOM, ROASTED!