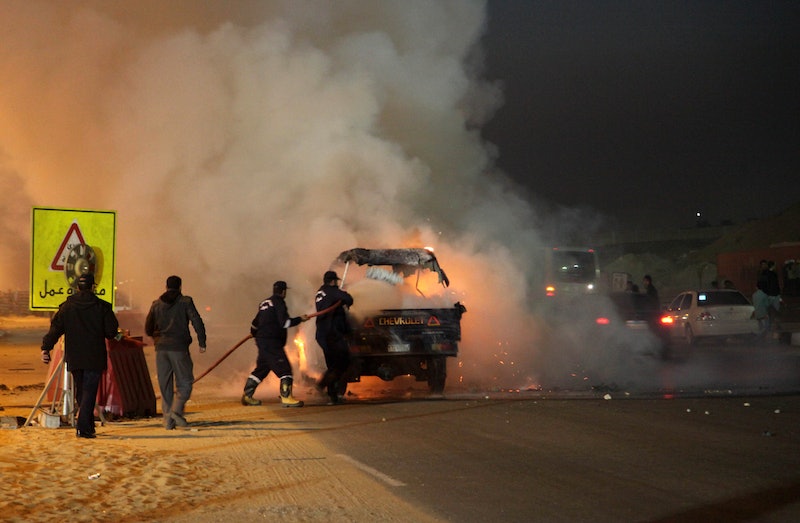 More than 20 people have died after a riot broke out before a soccer match in Egypt, authorities say. Zamalek and ENPPI, two Egyptian Premier League clubs, were set to play a match at the Air Defense Stadium east of Cairo on Sunday night when apparently a large group of ticketless fans began clambering to get inside to watch the game. According to the AP, only 10,000 people were to be allowed into the 30,000-person stadium; that many supporters were only recently allowed to attend games again because of violence during a match three years ago that killed more than 70 people.

According to the AP, "hard-core" Egyptian soccer fans are known as "Ultras" and are also known for clashing with police. After the violence in 2012, Egypt began limiting the number of people who were allowed to enter stadiums, and fans would often try to storm arenas in order to watch the games. The limits on how many can attend soccer matches will be reinstated, the BBC reports. In Sunday night's riot, authorities attribute the number of deaths — which currently is reported ranging from 19 to 25 — to a stampede, specifically by Zamalek fans. Egypt's interior ministry said in a statement:

Huge numbers of Zamalek club fans came to Air Defense Stadium to attend the match ... and tried to storm the stadium gates by force, which prompted the troops to prevent them from continuing the assault.

The AP has also reported that Ultras not only clash with police outside the stadium, but also in the political sphere. During the 2011 uprising that overthrew President Hosni Mubarak, these soccer fans played a role in the ouster. A year later during the deadly 2012 soccer riot at a match between Port Said's Al-Masry and Cairo's Al-Ahly, supporters accused the police of passively allowing the violence to occur out of revenge for the political rebellion. The police denied the accusation, though two officers were later given 15-year prison sentences for "gross negligence and failure to stop the Port Said killings," the AP reported.

Authorities say the deaths were the result of a stampede and possibly suffocation from the trampling that resulted. In its statement, the Interior Ministry further said of the Zamalek fans:

They climbed the fence. Ten were injured in a stampede. The security forces tried to disperse them, the fans fled to the main road and blocked traffic and stopped the bus carrying the Zamalek soccer team. They set fire to a police vehicle. We got reports of fatalities because of a stampede.

Zamalek supporters, known as the Ultra White Knights, said the violence started because there was only one narrow door to let them into the stadium, and the door had barbed wire on it. Then police began firing tear gas and birdshot, a kind of shotgun shell, at the crowd, they said. Egyptian Twitter users are pointing to police as the cause of death, using words such as "massacre," "slaughter," and "deliberate."

The match between Zamalek and ENPPI went on despite the death toll, ending in a 1-1 draw. According to Reuters, the national league championship will be postponed indefinitely.