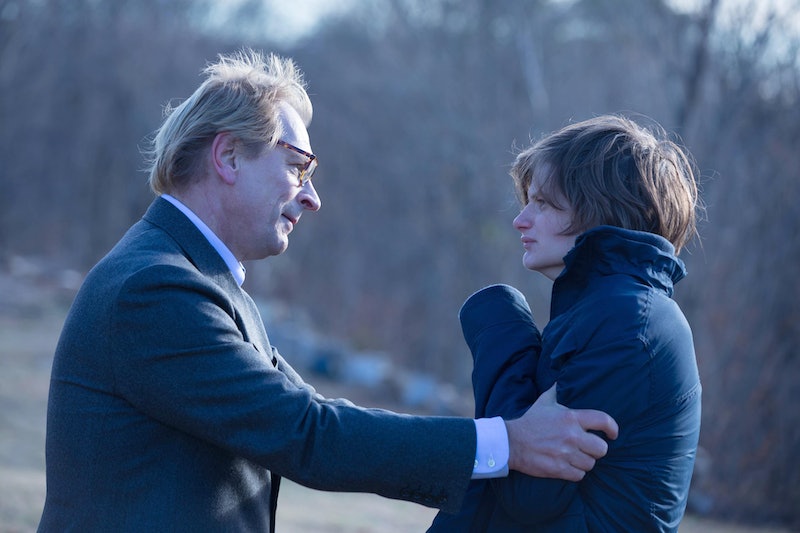 Gotham or what I like to call it, Batman: The Teenage Years, has been hellbent on introducing as many younger versions of the villains we know and love from the comics into its first season as possible. Gotham has already covered most of the major villains. We've seen Harvey Dent as he's just beginning his career as an Assistant District Attorney and Catwoman as a teenaged orphan/thief. So far, Oswald Cobblepot, aka the Penguin, has been the only one of Batman's future rogue's gallery members to be given any development. You'd think the show would slow down on introducing any other iconic characters, but we'll be seeing more of Jonathan Crane on Gotham in the Feb. 9 episode "The Scarecrow." However, this Scarecrow may differ from the DC Comics character you know.

On Gotham we'll see Jonathan Crane as a teenager long before he transforms into the Master of Fear we know as the Scarecrow. The show will be laying the groundwork for his future by depicting his father, Gerald Crane, as a murderous biology teacher who has been harvesting glands from his murder victims. Gotham has yet to find a backstory it doesn't want to run into the ground with over-explanation and lack of subtlety. But, what can we expect on Gotham knowing the history of the Scarecrow?

The Scarecrow is one of Batman's long time villains, debuting in 1941, but he wasn't given much development until the late 1960s. Since then has has become a staple of Batman's rogue's gallery. Having been around this long, his backstory has changed quite a bit. Still, Crane seems tailor-made for a life of crime considering his rough childhood in every version. But a few things remain consistent. Born Jonathan Crane, he's an unloved child with a brutal family life who retreats into his love of science as the world around him is too terrible to bear. He develops a love of scaring people and the power that comes from this.

In his most recent incarnation, Crane's father developed a fear toxin and experimented on his unwilling son. Gotham is keeping with the terrible father storyline in a different way by making Jonathan's father, Gerald, a murderous biology teacher. But we're still seeing Gerald use his son as a guinea pig. Pretty sick, right? But it's certainly in keeping with Jonathan's consistently traumatic childhood.

In the comics, eventually Jonathan becomes a psychologist and furthers his study of human fear before taking on the mantle of the Scarecrow. He invents his own fear toxin that causes his victims to have terrifying hallucinations, which tap into their deepest fears. He dons the garb of a scarecrow to make these hallucinations even more intense. Dude definitely has issues.

His Relationship With Batman

The dynamic between Batman and the Scarecrow can easily be described as intense, but doesn't everyone have an intense relationship with Batman? What's really interesting about the Scarecrow is that he can no longer feel fear, except from Batman, because of his prolonged exposure to his own fear toxins. He has a weird addiction to fear so he tends to seek out Batman for kicks (literally). The characters are violently codependent, much like Batman's antagonistic dynamic with the Joker.

Teaming Up With Other Villains

Scarecrow actually partners with other villains frequently, including The Joker, Harley Quinn, Mad Hatter, and Hush. In the past he's also joined the Injustice League and Legion of Doom. Seeing him team up with other villains is definitely likely if Gotham gets far enough along that they develop Jonathan beyond his teenage years. Of course, that doesn't rule out his crazy father from finding his way into the company of people like the Penguin. But one thing to keep in mind is that like The Joker, Scarecrow's goals as a bad guy aren't simply money or the kind of power that comes from being a mob boss. Scarecrow is after something far more dangerous and primal: fear.

You probably best know the Scarecrow from Batman Begins. Cillian Murphy killed it in the dual roles of Dr. Jonathan Crane and the Scarecrow. He was intelligent, creepy, and a formidable villain that tapped into Bruce Wayne's greatest fears. If you want to see more of the Scarecrow, look no further than his appearances on the Batman: The Animated Series and The New Adventures of Batman. His revamped costume on The New Adventures of Batman is one of the darker versions of the character that still gives me the creeps.

At the 2014 Stan Lee's Comicaze, Gotham producer Danny Canon teased what to expect from the Scarecrow on Gotham, saying, "...the villain will be seen as a child, before he takes on the Scarecrow moniker. In fact, it's something that will be passed on to him from his father, which will create an eventual enemy for Batman while still having a possible adversary for Jim Gordon."

Even though we'll be seeing a pint-sized version of Scarecrow on the show, let's hope the Gotham writers can bring their A-game to developing this fearsome, fascinating villain into a worthy adversary.