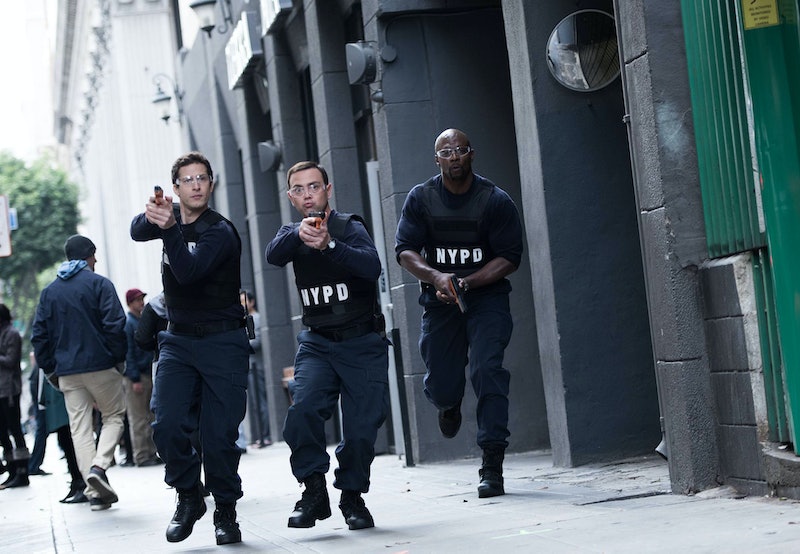 Sophia, Jake's defense attorney main squeeze, just broke up with him in the last episode of Brooklyn Nine-Nine. A usually egotistical Jake actually showed some humility as he waited desperately for a text from Sophia. All the while, the team was invited to a Homeland Security training simulation, the only non-federal group invited to the drill to boot. So it seemed like this would be the perfect opportunity for Jake to try to get over Sophia a little bit and find some catharsis or "cathart," as it becomes known.

Clearly, this episode was an attempt to capitalize on the success of a storyline from last season, "Tactical Village," when the 99th Precinct participated in a training drill with a bunch of other NYPD precincts. But this time, the 99th Precinct wasn't up against their fellow police officers. They were in the big leagues now with federal agencies, including the ATF, FBI, and, of course, Homeland Security.

But we all know the 99th Precinct doesn't go down that easy. Although Agent Kendrick relegated them to the unglamorous and pretty lame position of acting as hostages in the training simulation, which basically meant they were going to have to sit in a room and wait for the other agents to rescue them, Jake staged a pretty badass uprising to fight back and take over the training simulation.

The hostages were now going to save themselves and everyone else, and they did it in very Brooklyn Nine-Nine style. Jake led the crew. Boyle served as his right-hand man. Rosa and Amy were taking down bad guys as they bickered over who would take the Saturday work shift. And Scully and Hitchcock just wanted to know when lunch would be served.

I love it when the Brooklyn Nine-Nine teams riff off of each other, and there was plenty of it during this episode. Also, the moment when Terry used those bulging muscles and literally broke out of his chair was everything I've ever wanted in a Terry moment.

Unfortunately, this whole training simulation was kind of a bomb in a couple of ways. For one, the team failed, and the federal agents eventually won, which just left you feeling gross because of how douchey they were to the team.

And second, the episode ended with a short encounter between Jake and Sophia as he returned a box full of her stuff. You would have thought that the show would have provided a glimmer of hope that they will get back together. Instead, the moment was awkward and icy and provided no hope whatsoever. And while it was sad to watch, I appreciated that Brooklyn Nine-Nine didn't go the predictable route. And that also means the door for things to heat up between Jake and Amy has been left open.