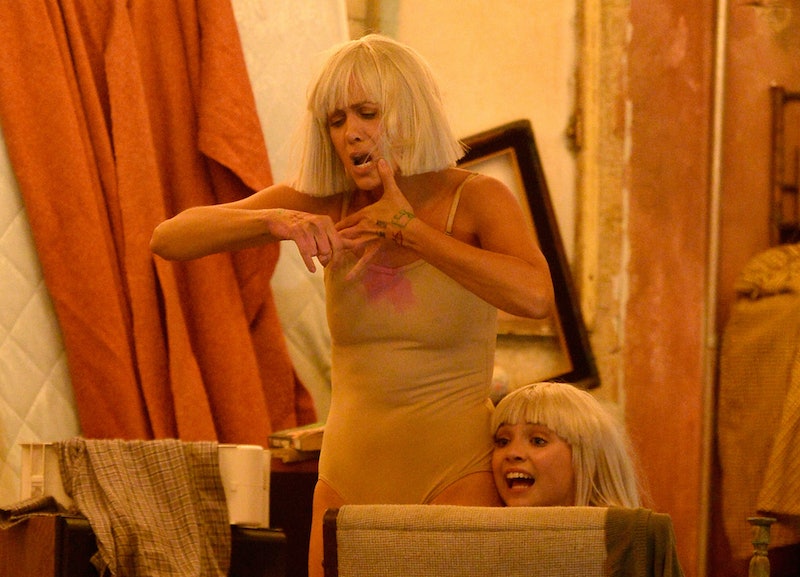 What just happened? In a spectacular move during Sia's performance of "Chandelier" at the 2015 Grammys telecast on Sunday night, the world was treated to one of the best appearances ever as Saturday Night Live vet and one of the best funny people in the history of funny people, Kristen Wiig, danced onstage alongside Sia's normal kid dancer Maddie Ziegler — and it was actually really awesome. Not that there was any doubt that Wiig couldn't do anything she sets her mind to, but the sheer intensity and the mix of humor and actual dancing that took place in Wiig's performance was really great. She really seemed to take the whole process seriously, even while doing the strangest, even childlike moves at times. So that made me wonder, can Kristen Wiig actually dance?

Of course we've seen Wiig dance in different ways throughout her time on Saturday Night Live and even in her wonderful indie film from 2014 The Skeleton Twins . And then there was that time she danced with Harry Styles during a Saturday Night Live afterparty to the song "I've Had The Time Of My Life" from Dirty Dancing, a fun dancing staple. But how much actual, real dance training does Wiig have?

Well funnily enough, according to a feature from New York Times, she has a real history with dance. The story mentions a moment during a Saturday Night Live rehearsal where Wiig looked like long and leggy like a dancer and the post then mentioned that the actress/comedian actually studied ballet for close to seven years. That actually explains so much about Wiig's physical comedy throughout her career. She's always been more limber in her movements and much more flexible than others.

During an interview with Dave Grohl, the Foo Fighters leader also compliment Wiig on her danceability.

GROHL: "...But to me, you set up a song, and then you kind of hit the accent like it’s a punch line, and it totally works. I think you’d be so good at it. And you can f*ckin’ dance, Kristen. I’ve watched you on TV. I know that you can dance.WIIG: And you have to know how to dance to be a good drummer, right?GROHL: I cannot dance. I can sort of fake dance. Actually, I tried breakdancing when I was a kid."

Well there ya go. From looks to dance talent, Kristen Wiig was the absolute perfect person to take on the strange, intense, funny and beautiful dancing world that Sia creates and inhabits. And the performance easily made for one of the most memorable moments of the night.