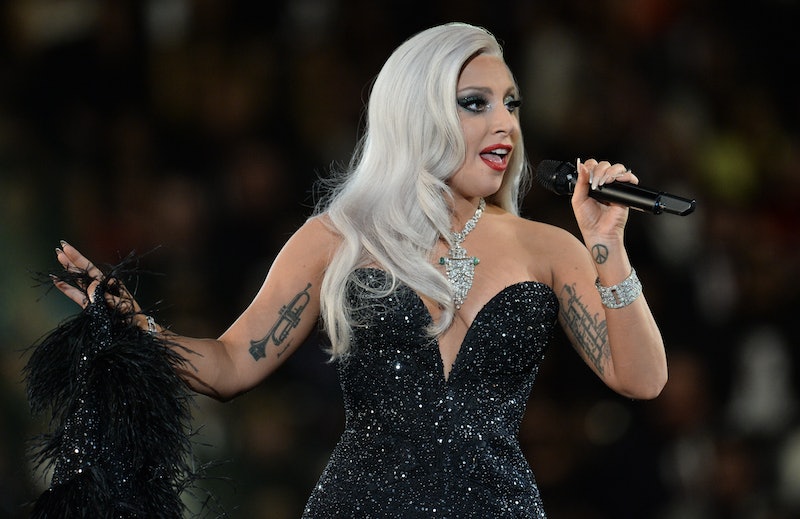 Lady Gaga's newest entry into the celeb scent sweepstakes is Eau de Gaga, a unisex fragrance. Since Gaga is the patron saints of girls, boys, monsters, the LGBT community, and anyone with an alternative lifestyle, her delivery of an all-encompassing scent should shock no one. However, it has landed with none of the fanfare or promotion of her debut scent, the black-in-the-bottle, clear-when-it-hits-skin Fame. Lady Gaga's Eau De Gaga perfume has had an uncharacteristically quiet launch, but I still put it to the test... with two dudes.

How did Eau de Gaga stack up? Is it feminine enough? Masculine enough? A perfect balance of both?

Well, its notes are white violet, sparkling lime, and leather, so it's fruity, woodsy, and floral. I also thought I smelled a hint of vetiver, which gave the fragrance an extra earthy note as well. It's incredibly strong. If you don't like a bold or heavy perfume scent, then you will probably hate Eau de Gaga. I prefer fresh, clean, soapy, or vanilla scents, so this was certainly well outside of my comfort zone.

I spritzed my knit scarf with the scent, so it would linger all weekend long. It is certainly a strong and masculine aura, and definitely good for the dark, winter months. It's not something I'd ever hit my pulse points with in the icky, sticky summer, that's for sure.

I found it to be rich and very dude-like. I didn't dislike the smell, but I personally would not wear it again. It was just too heavy for my taste. I was fully aware that I was wearing perfume and felt like everyone's noses turned my way when I entered a room. I wanted smelling salts or coffee beans to clear my sinuses by the end of the weekend.

I did, however, love the sleek, black lacquered bottle. Racked National pointed out that it knocks off Tom Ford bottles, and I have to agree with that assessment. Whenever, I still love how stark it is.

Now, I needed a dude's opinion. Luckily, my BFF Mike was game to test it. He digs Gaga and he also has amassed an impressive scent library through the years. He always smells good, but it's never overpowering. He actually loved Eau de Gaga and is fully planning to wear it again. In terms of the sniff test, I thought it smelled better on him than me, so perhaps it had a better reaction with his body chemistry, regardless of our opposite sexes.

For a third opinion, we enlisted our friend Keith, who also has a discerning nose when it comes to perfume and cologne, insisted that Eau de Gaga reminded him of one of the Gap scents mixed with something else. We banded back and forth about which Gap scent and which "else" it could be. The blue one? No, that was Heaven, which was crisp and light. We then semi agreed that it was the Gap purple scent — that'd be Dream, which had violet notes — and the jury is still out on the something else. I'm still sniffing vetiver.

Keith agreed that Eau de Gaga has olfactory weight. He assessed that both men and women could wear this, yes, but it's way heavier and probably would be preferred by men. I'm agreeing with that, but from the perspective of someone who doesn't like a vivid, full-bodied scent such as that.

Basically Eau de Gaga is incredibly wearable for both genders, depending on how you like to smell. But for my nose, it's more masculine than feminine. And I am also perplexed by Gaga's lack of support behind her latest non-musical endeavor. What gives?