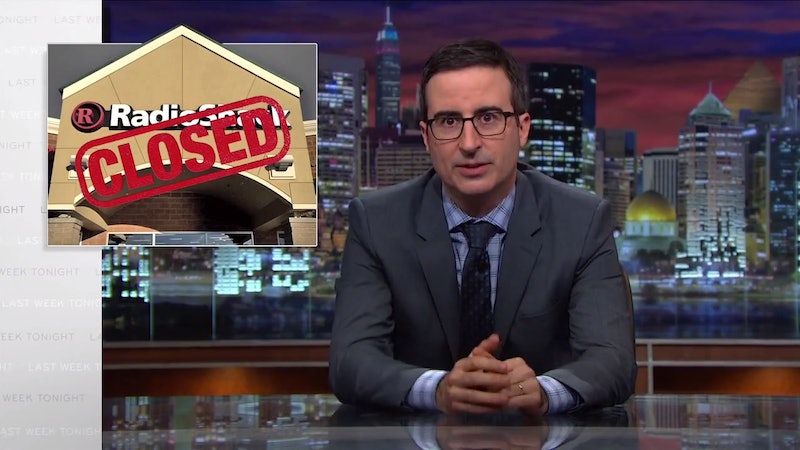 I don't know about you, but when I hear the name "RadioShack," I automatically think of loitering around the mall as a pre-teen in the '90s. Perhaps that's because that was the last time I ever stepped foot inside a RadioShack, and apparently I wasn't alone. Last Thursday, RadioShack filed for Chapter 11 bankruptcy protection after failing to turn a profit since 2011. It's sad to see something with such nostalgic charm go under, so a proper goodbye is in order — and a proper goodbye is what John Oliver gave RadioShack on his first episode of Last Week Tonight after returning from what felt like a years-long hiatus.

The 94-year-old electronics chain filed for bankruptcy after agreeing to sell half of its stores — roughly 2,000 — to Sprint. The remaining stores will be shuttered. This bit of information, according to Oliver, was almost too sad to bear.

You know it's a rough day when 2,000 new Sprint locations is the happy part of a sentence.

Many people were taken aback by the news — but not so much because RadioShack is closing. As a sort of backhanded consolation, many are saying they're surprised it even lasted this long. Oliver offered his own consolation, reminding viewers that RadioShack was once a force to be reckoned with. He recalled the store's glory days by playing one of its commercials from the '90s and it might be the most epic thing you see all week.

Did RadioShack release that song on cassette? Can I find it on Spotify? That commercial must have had more extras than a Lord of the Rings movie. Oliver noted:

That is a catchy song, my friends. If they had left that on air, they'd be the most powerful company on earth today.

Then Oliver points out that perhaps part of the chain's demise can be attributed to the disrespectful way people have been talking about it in recent years. In one segment, a finance pundit gibes, "If you have the name 'radio' in your corporate name, that's probably not a good sign in 2014." Another news host says that he actually likes RadioShack and he goes there a few times a year. His co-host jokes that he must have a very full "junk drawer" and then laughs. Oliver does not appreciate the snark.

"Ha ha ha" — hey hey! This is a dying 94-year-old business. At this point it's like sitting across from your grandfather at Thanksgiving saying, "You know, I don't really see the point of grandpa in 2015. Frankly, I'm sort of surprised he still exists."

So it's totally warranted if RadioShack is a little hurt. And because he's the magnanimous TV host that we all know and love, John Oliver has prepared a farewell message for RadioShack that sends them off with honor and dignity. (And RadioShack should feel free to use it.)

For nearly a century we at RadioShack have proudly served America, providing you with the highest-quality home electronics at the best prices.

And now, sadly, it's time for us to say goodbye. And so we would like to offer this special farewell message to America: Go f*ck yourselves.

That's right, take a 30-pack of batteries and shove them directly up your ass. Who sold your parents that remote-controlled car you got for Christmas in 1993 that you love so damn much?

RadioShack, motherf*ckers. That's who. And remember in 1989 when you needed a cable to plug in your Nintendo into the TV?

Who was there for you? That's right — RadioShack again, assholes.

And now look at you, laughing at our slow, painful death. Well, laugh while you still can, sh*theads.

So, America, from all of us here at RadioShack: Goodbye, and go to hell, you filthy animals.