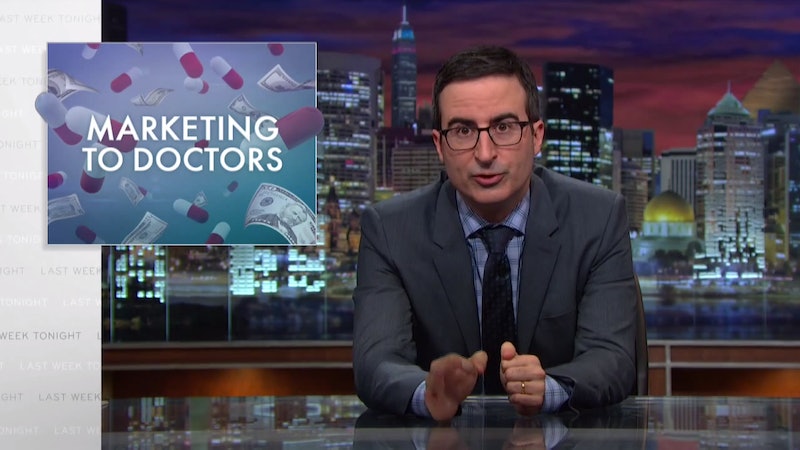 Prescription drugs are a massive industry in the U.S. — a $300 billion industry, to be exact. Perhaps that's because a staggering 70 percent of Americans take at least one prescription drug and 50 percent take two. But why are we taking so many pills and do we need to be? That's what our Last Week Tonight hero would like to examine. In his first episode after his hiatus, John Oliver exposed Big Pharma's aggressive marketing tactics and the unethical way drug companies push them onto doctors. After watching the segment, you'll never doubt again whether America has a prescription drug problem.

Oliver opens his episode with a dig at the Seattle Seahawks, somehow tying this in his main topic of the evening.

Prescription drugs: The only ovals that can bring people in the Seattle area joy anymore.

It's a bit of a stretch, but very topical — I'll give him that.

In his investigation, Oliver found that American spent nearly $330 billion on prescription drugs in 2014, a dollar amount that makes him think:

A major factor behind Americans' prescription drug habits? The never-ending ads we see every day.

It's impossible to escape pharmaceutical ads. You can't turn on the TV without being subjected to an endless stream of sleep-inducing moths, old men getting boners while varnishing chairs, or this:

OK, OK, listen. What that woman really needs is a pill to stop her hallucinating anthropomorphic bladders.

But prescription drugs are a tricky product to market because consumers need someone's permission to buy them — their doctor's — and that's why all ads end with the same catchy phrase: "Ask your doctor." And it's also why Big Pharma spends $4 billion marketing to consumers and a whopping $24 billion marketing to healthcare providers. Oliver referenced a study from November 2014 that found that nine out of 10 Big Pharma companies spent more money on marketing than on actual medicinal research and development.

Drug companies are a bit like high school boyfriends. They're much more concerned with getting inside you than being effective once they're in there.

But when Oliver tried to investigate how all that money is spent, he found it to be a challenge because that world is suspiciously secretive. The only glimpses the public gets is through lawsuits, like in 2012 when the government settled a case with asthma medication Advair over allegedly irresponsible marketing tactics. The lawsuit revealed for the first time a video the drug company used during their sales meetings. It looked something like this:

What the f*ck? That was for an asthma medication, and they were treating it like an NBA pre-show.

Why all the pyrotechnics and flashy entrances? The audience members were largely pharmaceutical reps, who Oliver calls the "foot soldiers in every company's drug marketing efforts." These reps are supposed to "educate" doctors on the drugs, but according to the video, their first priority is to make money. And to help them convince physicians to sell their product, they must be young and attractive, a job requirement that's become so well-known that sitcoms like Scrubs have joked about it.

If something is a joke on Scrubs, you know it's common knowledge.

But while physical attractiveness is a prerequisite, actual knowledge of the drug, or even a science background, is not. Even so, doctors will often defer to their advice and "expertise" when prescribing medicine to patients. In fact, doctors love these pharmaceutical reps, because they often come bearing gifts. Such as? Free drug samples and free ... chicken parm. Some physicians' offices get free lunch every day from reps and even include that as a perk in their job description for applicants.

Free lunch every day — now, that might not seem like a big deal, but think about it. Lunch is awesome. If Charlie Manson brought me a free lunch every day, I'd at least listen to his sales pitch on forehead swastikas.

And if it would work for Oliver, it also works for doctors. That's not the only alarming part, however. Pharmaceutical companies then monitor how many prescriptions doctors write for their medicine as well as competitors' products. If a company sees that a doctor is favoring competitor, that's when it applies pressure and crosses the line.

Big Pharma will often engage in an unethical practice known as "going off label," which means they're pushing doctors to prescribe a drug for non-FDA-approved uses. One "horrifying example": The government charged AstraZeneca with going off label in marketing its bipolar and schizophrenia medication for the treatment of other disorders like sleeplessness, depression, and dementia.

You can't just give people potentially dangerous drugs and see what happens. You're a Fortune 500 company, not a white guy with dreadlocks at Burning Man.

The most disturbing part? Oliver says that just about every single Big Pharma company has paid money to settle similar charges.

In addition to wooing doctors with gifts, pharmaceutical companies will also pay doctors to talk to other doctors about their product, under the grandiose title of "Though Leader." And of course that's going to be appealing.

However, it turns out not much thought goes into their roles. Often times, these doctors will rely on scripts provided by the drug companies.To be fair, Oliver points out, the industry is trying to reform. A spokesperson for Pharma, the industry's trade group, talked about the "tough" new regulations they were implementing. Instead of steaks, these reps were to only bring "modest meals" going forward, like turkey sandwiches, pizza, and maybe even ham sandwiches. (That should do the trick.) However, not all companies are abiding by these rules, as Swiss company Novartis was found to be bringing doctors to Hooters in exchange for writing prescriptions.

Don't worry — researchers show that the best medical decisions are always made with an Arizona State college football game blasting in the background.

At least Hooters qualifies as a modest meal, Oliver diplomatically points out.But jokes aside, the practice of hiring doctors as paid spokesmen for pharmaceutical companies presents a blatant conflict of interest. Reports have found that many drugs' top prescribers were getting paid from that same drug company.

When you see Rihanna trying to get you to drink coconut water, you know she's getting money to do that. And you take that into account. You think to yourself, "I'm glad you're getting paid, Riri, but I'm not going to drink that because you and I both know that coconut water tastes like cereal milk mixed with bull semen."

Fortunately, there is one bit of good news in among all this corruption. A new clause in Obama's Affordable Care Act allows consumers to search a federal website for the specific perks given to physicians by pharmaceutical companies. It's called OpenPaymentsData.CMS.gov, and you can use it to look up your doctor.What you find could range from a doctor who did a little research for a drug company to doctors who've earned more than $1 million delivering promotional talks and consulting, or maybe, like Oliver found, a doctor who one day got food and beverages totaling 4 cents.

I have to know what that meal was, because the only way a 4-cent meal makes sense is if that doctor is a mouse.

The point is, we all owe it to ourselves to use this database. And it might be the only way Big Pharma can regain our trust — through full disclosure.

Oliver ends with a parody commercial about the effects pharmaceutical money has on them, which may include "chronic over-prescription, unusually heavy cash flow, dependency on free samples, inflammation of confidence, affluenza, and an increased tendency to suggest off-label prescriptions."

The doctor is then shown making it rain with prescriptions before the commercial ends cleverly with: "Pharmaceutical Money — ask your doctor if his taking it is right for you."