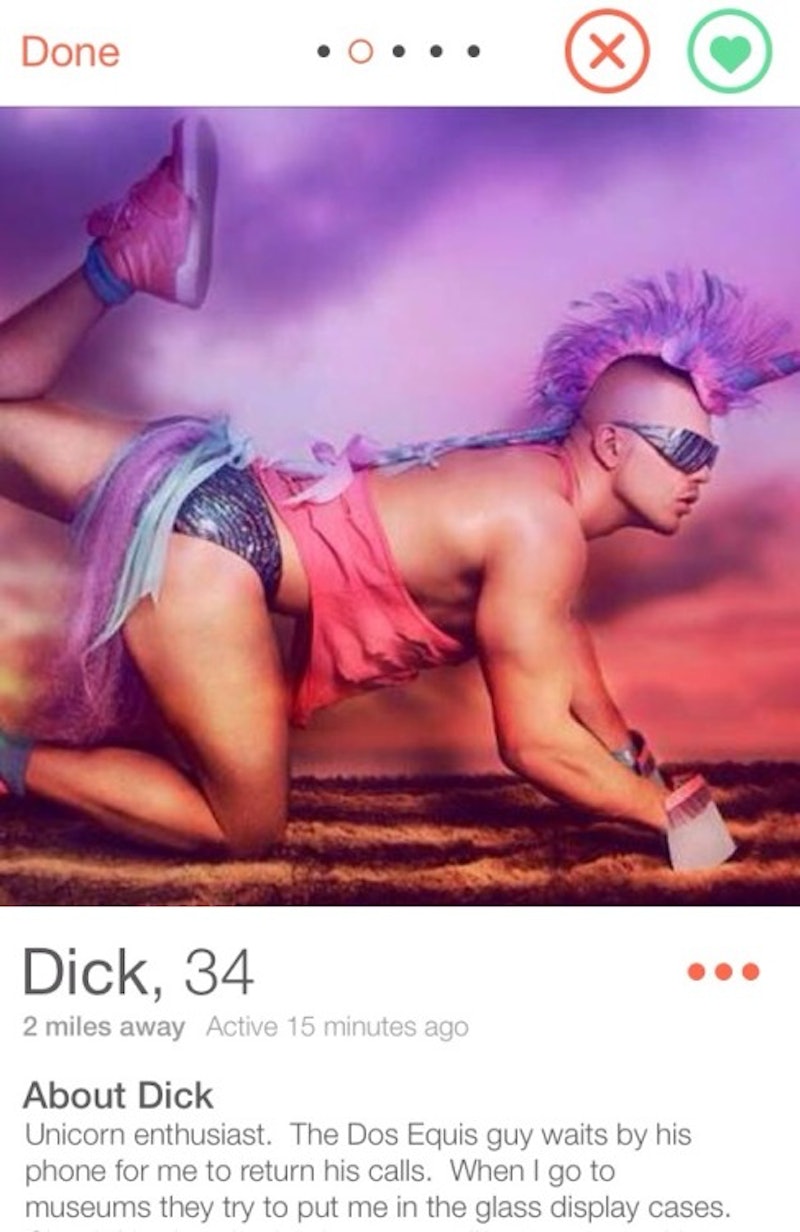 Users on Tinder will already know this, and anyone who has heard of Tinder / has a friend on Tinder / is on Tinder but pretends not to be also knows this definite truth: Tinder can be the absolute worst. This is especially true in the trendy neighborhoods of places like Brooklyn (which is probably not even a scratch on somewhere like East LA). A woman named Lindsay knows this, and she's started a Tumblr called "Tinder In Brooklyn", documenting the weird and wonderful freaks and geeks who advertise themselves on the dating app. The whole thing makes me glad I've found a normal person to co-habit with, because people: it's grim out there in the dating, at least on Tinder. And if the commonality of weirdos on Tinder wasn't enough, there's also someone out there judging you on your relative date-ability based on a handful of photos and a few sentences. Who's to even say YOU haven't made it to someone's Tinder blog? Online dating is ever-more-terrifying, is what I'm saying.

Lindsay's blog isn't totally mocking—she could be much meaner, and let's be real, who hasn't had a friend screengrab a Tinder right swipe for some group text LOLs?—and even when it is, it's not totally unjustified. I mean, if you're going to put a picture of yourself holding Rohypnol and giving the thumbs up next to two girls vomiting you ought to reasonably expect that someone is going to call you a rapist:

See, that's fair. I'd call Sten a rapist too, or at least a total ass-bag misogynist pig who thinks it's funny to laugh at girls getting drugged and raped.

Lindsay wants to invite this guy out for "orange mocha frappuccinos IMMIDIATELY", which is the greatest Zoolader reference ever.

And then there's Dick. I'm sorry, Dick, but you're really asking for someone to have something to say about you:

Although I kind of think I'd go out with Dick, just to see what he was about. He might be a really cool guy, you never know. At least he's not making date rape jokes, and seems to have interests! Some days, that's the best you can hope for on Tinder.

Linsday's got a joke for everything, even when it's not mocking/exposing the bleakness that is the world of Tinder dating, like the caption "Horatio is basically me with a hangover."

Yeah, it's a difficult world out there if you're into crowd sourced dating. But also an incredibly entertaining one, and for all the douchebags posing with tigers, there's an eccentric guy like Dick, in Brooklyn, who just wants to pony rave to the end.