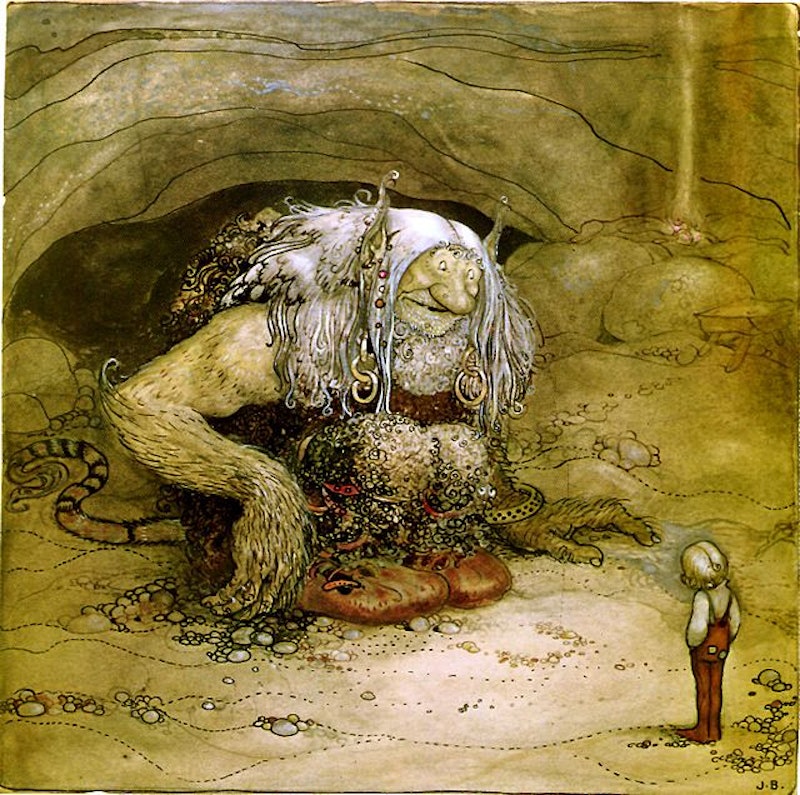 Last month, a This American Life episode about trolling went viral, largely because of one section: the segment where Lindy West, an author and feminist blogger who specializes in what she calls "big, fat, bitchy topics," candidly confronted one of her worst trolls — and received an apology. The episode, If You Don't Have Anything Nice To Say, SAY IT IN ALL-CAPS, was a special one, and not just because it highlighted the many different ways in which anonymity has become weaponized on the Internet. It was ultimately a groundbreaking episode because it featured a troll acknowledging his hurtful actions, claiming his responsibility publicly, and growing up.

Is this the ultimate anti-troll technique? Instead of obeying the usual internet edict of "Don't feed the trolls," should we be engaging — and even being kind?

Lindy West's story and others like it strike a chord, not only because we love to hear about People Learning And Growing, but because of the sheer pervasiveness, the seemingly impossible mass, of trolls. If you are a person with opinions on the Internet, particularly if those opinions are feminist, in any way political, or if you happen to identify as a lady, trolls will appear in the comments section. Thick and fast.

The idea behind fighting fire with understanding is that underneath every troll there's a human being you can reach — and, crucially, that it's harder for them to dehumanize a target if they're interacting with one.

I wrote a sex advice column for a while, and the comments section had to be removed because of regular obscenity: that's pretty standard. And it seems impossible to defeat trolls with rational argument or discussion, because, on a fundamental level, they aren't actually engaging with you at all.

Trolling is not the same as intelligent argument, passive-aggressive responses, or even snarky remarks. Urban Dictionary succinctly defines it as "being a prick on the Internet because you can." (Note the gendered language — we'll get to that.) Trolls are the Internet's Id; its chaotic underbelly, where anonymity allows for pure release of anybody's worst, most damaging impulses. Trolls can be pointed critics, but they sometimes don't particularly care about the content of their messages: they simply aim for reaction, hurt, and emotional violence. Any topic is fair game, and any method is reasonable. West's particular breaking point came when the troll in question made a Twitter account purporting to be run by her dead father.

The existence of trolls raises many interesting questions about human morality and motivation, and that is often where arguments start about how to deal with them. In an environment completely without rules — and, despite the efforts of Twitter and other trolling hubs, trolls still basically run completely free, abusing whoever they like — do humans automatically revert to doing whatever they want? Some point to the phenomenon of deindividuation, which essentially means losing your personal identity in a crowd or other anonymous space, as the key to understanding trolls: the less sense you have of yourself, the more likely you are to be disinhibited. Others say it's attention-seeking to raise a troll's self-esteem.

There's a powerful camp that argues it's just human nature: give us a world without controls and we just can't help ourselves. An Iraqi artist, Wafaa Bilal, made Internet trolling come to life in his 2007 art piece Domestic Tension: he allowed anybody on the Internet to "shoot" him with a paintball gun while he was confined to a gallery, and watch it happen live. Over 20 days, over 60,000 people took a pot shot.

However, some science shows that it may not be a humanity-wide problem, but a symptom of mental disorder. A Canadian study found that habitual trolls are narcissists, sadists, and sociopaths, people who lack empathy or consciously get pleasure from other peoples' pain. This isn't great news, as it means that telling them "Don't do that, it hurts" won't be effective in the slightest.

And then there's the gender aspect. You're not imagining it: trolls are overwhelmingly targeting female voices and users on the Internet. Gamergate and Jezebel's recent comment section trauma (trolls kept posting rape gifs) are aspects of an Internet-wide misogynist plague: some female content producers have had to shut their comments sections entirely, while others have to moderate ferociously. Bustle has no comment section, not because we don't love and appreciate our readers, but because we don't have a full time staff member dedicated to wading through the potentially hideous comments and potential rape threats. Trolling's particularly bad for women who seem powerful or speak out authoritatively on, well, any topic at all. But if you're targeted by a troll for whatever reason, what's the best way to deal with it?

Given the confusion about troll motivation, any response seems fraught. Silence, based on the idea that troll behavior is built around a response and denying it takes away their power, seems safe, but it strikes me as unfair — if somebody's calling me a slut, I demand the right to say something about it. However, the conventional wisdom of shut-up-and-take-it is now being replaced by something else: kindness.

Mary Beard, a Cambridge professor of history, wrote a letter of recommendation for one of her trolls, and writer and activist Ijeoma Oluo had a long Twitter conversation with a troll on MLK Day, alternatively arguing, cajoling, and sympathizing with him until he gradually revealed that he was an angry, grieving 13-year-old boy. It seems like such a good plan — calm discussion, lots of feelings and honesty, and everybody goes home happy. But I'm skeptical.

The idea behind fighting fire with understanding is that underneath every troll there's a human being you can reach — and, crucially, that it's harder for them to dehumanize a target if they're interacting with one. Kierkegaard observed this about bullies, too: envious or cruel people instantly become friendlier if you share an equal social interaction with them, like asking for a light. West's worst troll admitted as much, saying that when West interacted with him — in her case, mentioning the Twitter account in a Jezebel article — "It finally hit me: there is a living, breathing human being who's reading this stuff. I'm attacking someone who never harmed me in anyway and for no reason whatsoever."

Unfortunately, this doctrine is hard going: not all stories are going to end like West's, Beard's, or Oluo's. Apologies and turnarounds in the troll community make news precisely because they're radically uncommon, and few of us have the energy, grace, or time to interact with anonymous hate-spewers. If you've spent any time with online vitriol you know how draining it can be.

Victims of trolling must also be very wary of the narrative that every troll is just a hurting person needing a hug: as that Canadian study indicates, some trolls are just devoid of empathy. And the fact that a troll is a real person with their own problems does not diminish their responsibility for what they put out into the world.

Nobody is responsible for making their abuser into a better person, and being trolled does not obligate you to turn into Mister Rogers. Ultimately, the best way to deal with trolls must be the way that helps victims feel safe and justified. But silence doesn't have to be the only option for the trolled, and that's a powerful thing.