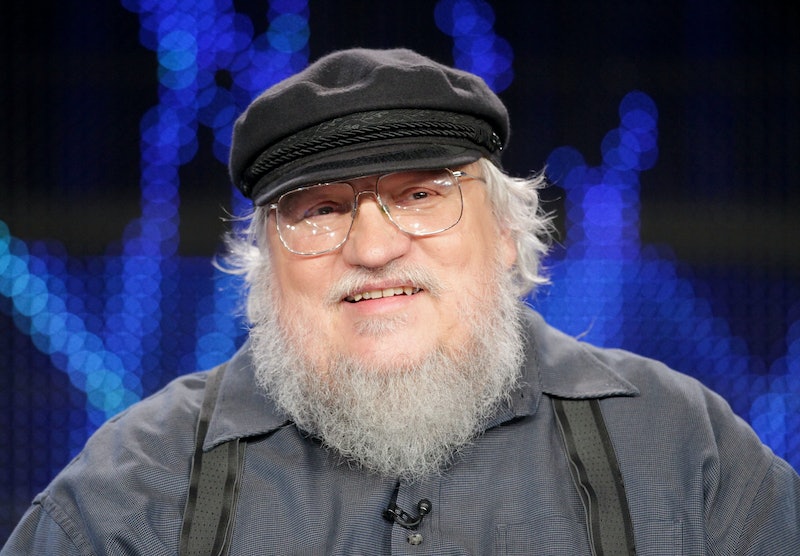 If you were devastated by the rumor that the next book in George RR Martin's Song of Ice and Fire series definitely won't be available in 2015, don't get too disappointed just yet. According to George R.R. Martin himself, those Winds of Winter publication rumors don't give us the full story. In other words, don't believe everything you hear.

The rumors didn't get everything wrong — it's true that, as of now, Martin's next installment, The Winds of Winter, is not on his publisher's release schedule for the year, and they aren't sure when the final manuscript will be delivered. Under normal circumstances, this would almost certainly mean a 2015 publication date was off the table, but Martin himself says that isn't necessarily true, though he doesn't offer any updates on when the book will be completed.

In response to a question from a fan in his LiveJournal, Martin explained in a comment,

I certainly hope that THE WINDS OF WINTER is not on the schedule of ANY of my publishers. I have spent years trying to persuade them all not to schedule my books until they are completed and delivered. Scheduling, and then having to reschedule and postpone, just pisses people off. I’d rather not schedule at all until the date is real and certain.

This flies against standard publishing practice, however, so it’s a battle that I do not always win.

So, basically, the normal publishing rules just don't apply to Martin, and thus the fact his new book isn't on his publisher's schedule yet doesn't mean anything one way or the other.

While it might not be standard publishing practice, not setting publishing dates without being sure they're feasible is probably the best approach when it comes to Martin's books. It seems mean to get Martin's fans' hopes up with a specific date, only to have to postpone and devastate everyone. And this is especially true since the immense popularity of HBO's Game of Thrones has grown Martin's fans to an alarming, mob-like number. In fact, it might be safer for everyone, not just less mean.

With a series like Song of Ice and Fire, it's probably better for Martin to take his time and get everything right, even if it means we all have to wait longer. Of course, if the new book isn't out before too much longer, it might cause some problems for the HBO team, as the television series slowly catches up with the available books. But that is HBO's headache, not ours. We just get to wait.

More like this
I've Read The Harry Potter Books 30+ Times & This Plot Hole Haunts Me
By Kelsey Stiegman
The 'House Of The Dragon' Showrunners Revealed One Key Similarity With 'GoT'
By Grace Wehniainen and Kadin Burnett
50 Dystopian Books To Read Now
By K.W. Colyard
10 Must-Read New Books Out This Week
By K.W. Colyard
Get Even More From Bustle — Sign Up For The Newsletter