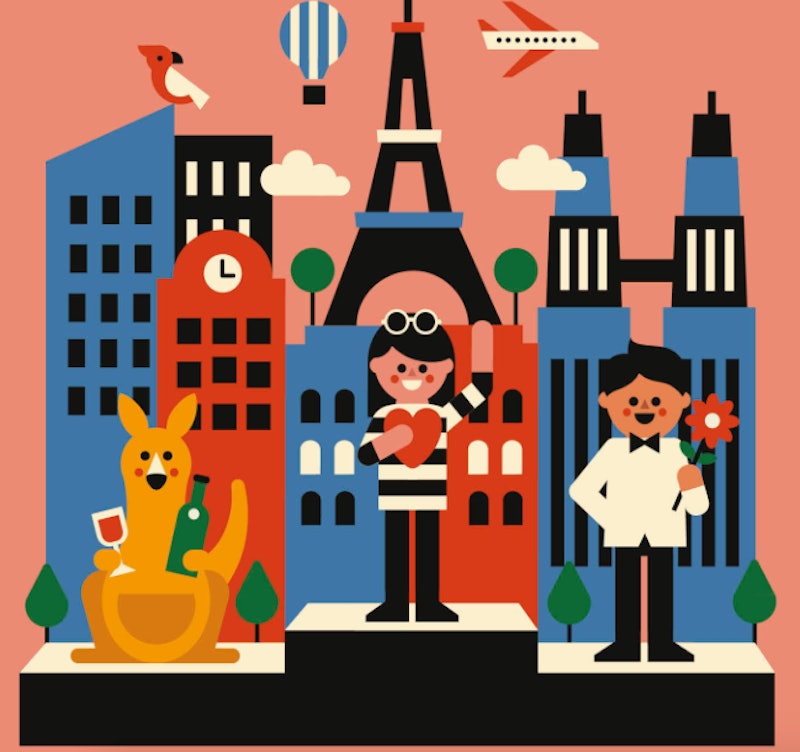 Batten down ye olde hatches. Now that the English know they've got the sexiest accent and the best sense of humor, we're in for a wild ride. International media brand and travel site Time Out polled about 11,000 people in order to bring us perhaps the most interesting insights we've seen in years on the global dating and sexiness scene. Depending on your own place of inhabitance you'll either be incredibly excited by the results or a bit concerned; certain countries pretty much took the cake.

Thanks to Time Out, we officially know which city is considered "most desperate," which has the most available men as reported by women and which way is best to meet possible mates which, honest moment here, made me cringe. Seriously, I can't wait to share this with you. It's earth-shattering. The internationally-oriented site also shared that about 24 cities from around the world participated in the survey and that the highest number of insight was gleaned from the likes of London, Paris, New York, Chicago, and L.A. So, you know, don't be too depressed because these people are loyal and results could easily have been influenced by nationalism. Let's get into our favorite findings, and for the full delightfully animated graphic go here.

1. Yup, English is the hottest of all the accents.

I personally feel that this is a matter of past experience and personal preference but media is king and we've got a whole lot of hot Brits overtaking Hollywood. I'm looking at you, Cumberbatch.

2. Paris is the best city for dating, according to Parisians themselves.

Love is in the air, and all that. Parisians seem to have the best attitude toward their chances at love in the city that prides itself on just that. Close contenders include Melbourne, Kuala Lumpur, Beijing, and Chicago.

3. New Yorkers are the most miserable daters.

If you're super behind on the whole New Year's resolution thing, why not have a go at making THE BEST CITY IN THE WORLD slightly less cynical. Indeed, 45 percent of all NYC residents who responded described themselves as "sad to be single." Holy tragic apples, batman.

4. Sydney is single and proud of it.

Of all the cities in participation, Sydney, Australia came out roses on the matter of singleness pride; 31 percent identified as "proudly single." New York weeps.

5. The American accent ranked second-hottest; we all erupt in baffled cheers.

Um, wat. Alright, not going to lie; this one is a bit shocking. It does speak to the proportion of non-Americans who may have put their two cents in because Americans typically don't even refer to themselves as having an accent. Let's be real, we're like the Wonder Bread of speech. Gotta say that I prefer Spanish myself, which ranked at number seven.

6. The world is getting the most dates out of online interactions.

Apps like Tinder and Plenty of Fish have made what used to be taboo normal, and why not? Truly, what's the difference between meeting someone through a friend or through a Facebook friend? Take it as you will but 60 percent of international daters said apps have gotten them more dates than any other method they've tried. Like asking someone in person. Slow clapping.

7. Both men and women are looking for "bankers or finance types." The Koch brothers pour up celebratory whiskies and I die inside just a bit.

Money-minded people rejoice, as you are considered as having the most dateable jobs for both genders. While the top three in this category varied for genders, both men and women also placed "artists and creatives" in their top three. In other words, everyone wants a Van Gogh who gets wildly rich and famous prior to cutting his ear off and dying. First-world problems, my friends.

Go check out the rest of the findings at Time Out.