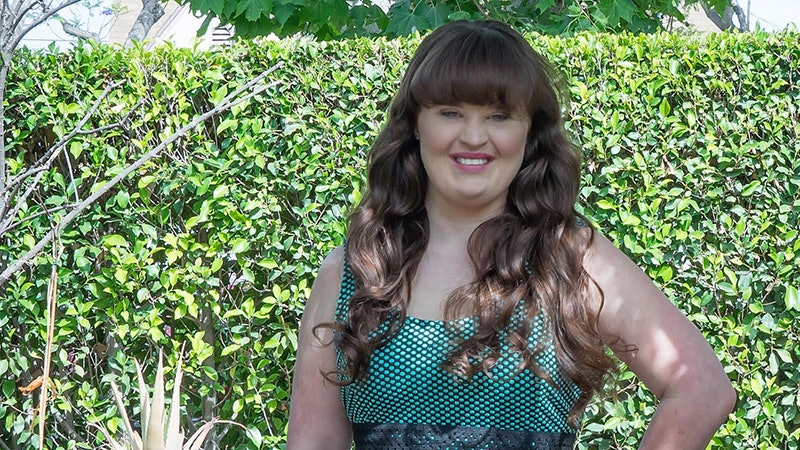 With Fashion Week just days away, New York's most stylish are prepping themselves for seven days of pretty clothes, celebrity sightings, and figuring out how to make snow boots look good enough to get street style-d in. This year, there will be a new face at NYFW: Jamie Brewer will model for Carrie Hammer, making her debut on the runway for the designer most known for featuring women who don't look like our traditional idea of a supermodel in her shows.

This might be Brewer's first stint on the catwalk, but you probably already recognize her from her various roles on American Horror Story. In addition to her acting career — and now her modeling gig — Brewer is incredibly active in the Down Syndrome community. She has served on the board and the Governmental Affairs Committee for the Texas state chapter of The ARC (a national advocacy organization for people with intellectual and developmental disabilities) and has been involved in multiple non-profits, including the National Down Syndrome Congress and American Association of People with Disabilities of the United States. Basically, she's probably one of the most amazing humans to exist on this planet.

Brewer will be walking alongside about two dozen other inspiring women (including journalists, activists, and independent businesswomen) in Carrie Hammer's #RoleModelsNotRunwayModels NYFW show on Thursday, Feb. 12. It was her activism in the Down Syndrome community that even got her the gig in the first place: A woman named Katie Driscoll, who started an organization called Changing The Face Of Beauty, reached out to Hammer asking to put someone who looks like her daughter, Grace, in the fashion show.

"The letter [Driscoll wrote] touched Carrie really deeply, so she contacted Katie and told her she was looking for a model with Down Syndrome to walk in the spring line in New York in Fashion Week," Brewer told Bustle. It was only a few weeks ago that Brewer found out she'd actually be walking in the show, and she's beyond excited. However, being a model comes with its own set of challenges... mostly related to footwear.

"Learning the model walk," Brewer said, when I asked her what the hardest part getting ready for the show has been so far. "Learning to walk in heels. I can do an inch and a half heel, but eventually I would love to be able to do six inches!" As someone deeply committed to my Converses, this goal is incredibly admirable IMO.

There are other hurdles to overcome as well of course, mainly the fashion industry's long-standing tradition of only casting models who fit a certain mold. Brewer's already a major inspiration for young women who might not fit that so-called ideal, in part with the help of Ryan Murphy and American Horror Story. Brewer's characters never put her in a box — she consistently plays powerful, smart young women, and often snags the hottest dude on the show.

Speaking of AHS, I obviously would never have let this interview go by without trying to get some spoilers out of Brewer. While she didn't have much to say by way of Season 5 (except that she'd love for it to take place in the Renaissance this time — yes, please), Brewer couldn't stop raving about all the costumes she's gotten to wear for the show, courtesy of costume designer Lou Eyrich. "All the collections of each season have been truly incredible," Brewer said. "But Nan was spectacular. The costumes [for Coven] were exquisite, especially in the flashbacks."

Brewer as Nan on AHS: Coven

All the awesome roles Brewer's been able to portray are certainly making strides towards a broader standard of beauty, and she's ridiculously understanding about why it's so freakin' long to get to this point, both in fashion and entertainment. "A lot of people have a certain image of what perfect is until they actually see or hear something that’s extremely different in the media," Brewer said. "If you haven’t seen or heard of the variety, how would you really know [it exists]? I think everyone in life should be willing to give anybody a chance in any profession." Right. On. With people like Carrie Hammer and Jamie Brewer fighting to give everyone a chance, I have high hopes for the future.