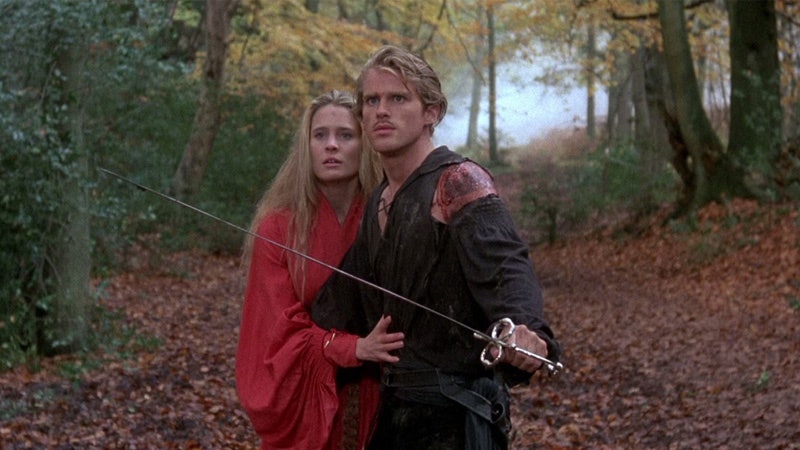 Most people associate The Princess Bride with Rob Reiner’s popular 1987 film. What many fans of the cult hit don’t realize is that the movie is actually an adaptation of a novel published by William Goldman in 1973, and that this novel is pretty much the best book of all time, for ever and ever, amen. In case it’s not already clear: I am sort of obsessed with The Princess Bride. I’m not sure I’m even able to write about it in an objective way because it’s one of those books that is so deeply branded on my brain that I can’t seem to separate it from my own emotional life. I first read the novel when I was 13 years old. As a kid, I didn’t like to read, but The Princess Bride seemed to set something alight. When I finished the novel, I immediately restarted it. After I had finished it for a second time, I set off to read every other book I could get my hands on. I know this sounds horribly cheesy, but I see that novel as the spark for the course my life has taken in the almost-twenty years since: my near-obsession with books, my English major in college, my years studying literature in graduate school, my work as a writer and teacher. Even now, the novel exerts a weird power over me; I only have to open it and read a few random paragraphs to become stupidly, giddily happy.

I want to make clear that this isn’t a “The Book Is Better Than The Movie And If You Like The Movie, You Must Be An Illiterate Twit” type of post. I actually love the movie, a fact that’s not at all surprising when you consider that William Goldman also wrote the screenplay. The film is similar to the book in a lot of ways — they share the same basic plot, the same characters, and the same sense of humor that manages to be wry and whimsical at the same time — but, of course, it’s different. The movie is rightly beloved because it’s effervescent and romantic and funny. The novel has all of that, too, but the pages simply have more depth, and more darkness to them.

I’ve made it my life’s work to get everyone I know to read it, and now I’m going to do my darndest to convert all of you, too. These are just a few reasons you should give The Princess Bride (The Book!) a spin, whether you’re a fan of the movie or not:

In Goldman’s telling, The Princess Bride is an epic work by Florinese author S. Morgenstern (a fictional author from a fictional country). The narrator of the novel (a fictionalized version of Goldman himself) describes how his father used to read the novel to him as a child, only to discover as an adult that his father had only read the child-friendly bits to him. The Princess Bride, then, is Goldman’s “abridged” version of the longer work. This may sound complicated, but in practice it works beautifully. Readers are treated to an elaborate frame narrative, in which we learn about Goldman’s family, his history and disappointments, as well as about the “novel” he’s abridging. Throughout The Princess Bride, we get interjections from Goldman, telling us he’s cut 56 pages in which Morgenstern describes a woman packing her hats over here, and 105 pages in which “from a narrative point of view … nothing happens” over there. As readers, we experience The Princess Bride from Goldman’s point of view as well as our own, and it’s his perception of the fairy tale — and the way it shifts as he grows from a child to an adult — that gives the novel its emotional depth.

2. There’s more history than there is in the movie (Hint: there’s more Inigo and Fezzik)

In the movie, Inigo’s history — the story of his father being killed by a six-fingered man — comes out in a brief scene with Westley, and we learn almost nothing about Fezzik the Giant. In the novel, these characters’ back-stories are extensive, and they are so, so good. We learn not only about the death of Inigo’s father, but the story of how he became the greatest swordsman in the world; we learn how the gentle giant Fezzik was bullied into becoming one of the strongest fighters of all time. We learn more about Buttercup and Westley and how they fall in love, and we learn about Humperdink and how he almost married a bald princess... basically, all of the characters that are so wonderful in the movie are just more in the book — more fleshed out, more detailed, more awesome.

In the novel, Prince Humperdink is an avid hunter who keeps a variety of bizarre creatures in his five-storied “Zoo of Death.” The Zoo is elaborate and strange, and the scenes of Inigo and Fezzik making their way through level after level — fighting snakes and giant bats — are hugely entertaining.

OK, so I know I sort of mentioned Inigo and Fezzik already, but they are so good that they get listed twice. The friendship between the swordsman and the giant that the film roughly sketches is fully realized in the novel. Most people would say that the central relationship of the story is the romantic connection between Westley and Buttercup, but I would argue that, in the book at least, the friendship between Inigo and Fezzik is the more powerful and real. I love the relationship between these two so much that I actually used one of their conversations in the book as a reading during my wedding ceremony. The kicker: “Let's look on the bright side: we're having an adventure… and most people live and die without being as lucky as we are.” Seriously, I could just start sobbing right here.

It just is. The humor ranges from the satirical to the silly, and no matter what’s happening in the novel, Goldman maintains a sense of ridiculousness. Some of my favorite parts of the book are the random asides, like the fact that “blue jeans were invented considerably before most people suppose” and “Originally, jealousy pertained solely to plants, other people’s cactus or ginkgoes, or later, when there was grass, grass, which is why, even to this day, we say that someone is green with jealousy.” The more you know!

Throughout the book, Goldman repeats the phrase “Life isn’t fair” over and over. That sentiment may seem at odds with the romantic fairy tale at the center of the story, but I think that unexpected juxtaposition is sort of the point. The book isn’t only about Buttercup and Westley, or Inigo and Fezzik and the six-fingered man; it’s about Goldman, and it’s about us — about how and why we read stories. Goldman’s message is one of the hardest lessons of growing up: life isn’t fair, everything isn’t always going to be all right, and we don’t always get what we deserve. But despite everything, there is still joy and humor and love. There are still stories.

Have fun storming the castle, everyone.