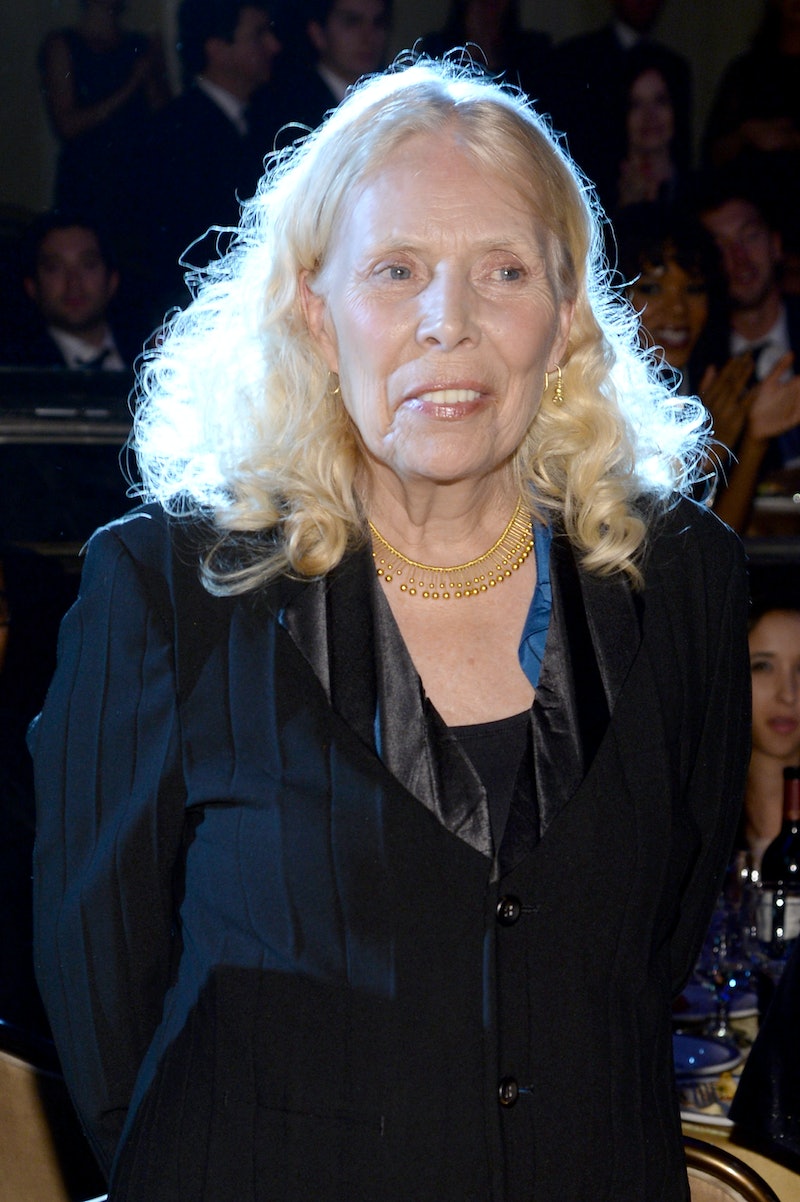 If you think you've seen it all when it comes to women on the cover of magazines, think again. While it's no secret that Joni Mitchell has been turning heads lately (let's talk about those YSL ads again, shall we?), her New York Magazine cover and interview proves that we have a lot to learn. Joni Mitchell covers New York Magazine for the February 2015 issue and though the cover photo is truly stunning, what really caught my attention is the interview inside the magazine. Between talking about her own health issues, her views on feminism, her past relationships and, oh yes, Taylor Swift starring in her biopic (or, rather, not starring), Mitchell had a lot to say.

It's not that the musician's cover issue is a particularly flattering portrayal of her; in fact, I would argue that much of the interview is a little bit cold or uncomfortable. You don't necessarily finish reading the piece and want to be friends with Mitchell, but when you read the article, look back at the cover photo, and repeat that process a few times, you find yourself nodding and saying, "Now that's a woman I'd like to be." You may not agree with her points of view or appreciate her music, but something about the raw, candid, and totally casual realness of the entire features is refreshing and encouraging. Mitchell is the ultimate anti-cover girl and is a testament to the beauty of being yourself even if that person isn't for everyone. Especially then. Here are five ways Mitchell broke stereotypes and inspired in her New York Magazine issue.

1. Her Thoughts On Feminism

Mitchell doesn't have a problem with explaining how she feels about men, women, and gender roles. Like everything, Mitchell describes and talks about those points in her own unique way, but her views on equality and dominant male egos in the industry can resonate with any woman.

"All my battles were with male egos. I’m just looking for equality, not to dominate. But I want to be able to control my vision. There are those moments when I wax feminine and I get walked on," Mitchell said.

2. She Doesn't Care If She Offends You

"Why does it come as such a shock to know you really have no one? If you’re not ready for that, it’s meaningless. If you’re ready for it and you’re in that space, you’ll burst into tears, and actually, it’ll make you stronger. You’ll be able to accept that, accept your loneliness, when you’re ready," Mitchell said.

Not exactly all flowers and butterflies, right? Exactly.

3. Her Individuality Goes Beyond Being "Cool"

Mitchell talked about a time that Warren Beatty criticized her choice of a Chanel quilted handbag, saying that it was "unbecoming for an artist." Mitchell's response? "… I have to give up my individuality to belong to the club?” Mitchell isn't giving up her individuality ever. I can tell you that right now.

It goes without saying that Mitchell isn't a "typical" cover model. This photo makes you look twice and is different than anything you'd usually see on the front of a magazine, and for all of that it's more beautiful than any standard cover, not less.

5. She's Aware Of Her Legacy

It seems like many talented and famous musicians and artists today are expected to belittle their talent or their fame. It makes people uncomfortable to hear people acknowledge that what they've produced is important or groundbreaking or completely unique. But Mitchell is comfortable with her success and her legacy, and she's not afraid to protect it. Seeing a woman talk about what she's done with pride is encouraging and refreshing, and something we can all learn a thing or two from.