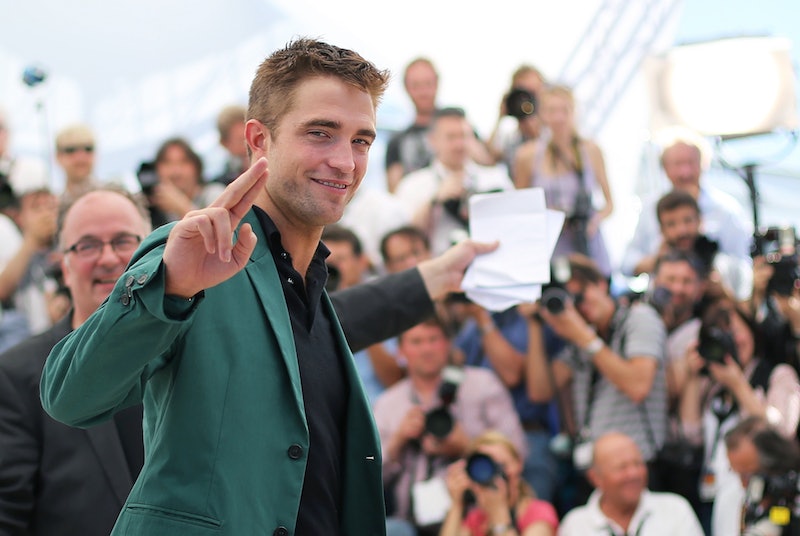 After the last installment of The Twilight Saga was released in 2012, there were some serious questions about the validity of Robert Pattinson as a "serious actor." As is often the case with actors in epic film series, they take the risk of being typecast and unable to find roles beyond those which made them household names. In the three years since the final Twilight film, Pattinson has taken on plenty of film projects that prove he is a serious actor post playing glittery vampire, Edward Cullen. In fact, there are quite a few Robert Pattinson movies that you can watch to get your R. Pattz fix without visiting Forks all over again.

While filming Twilight and the sequels, Pattinson was very vocal about his qualms with playing Edward Cullen and that, although it was a life changing role, it was definitely not his favorite. The self-effacing Pattinson told The Guardian in 2014,

I think Twilight's probably the hardest part I've done because to do it for five movies, it's really hard to think of stuff that's maybe not boring. Especially if you don't die. Because what's the drama? You're not scared of anything! And that's the whole essence of drama: life and death,

That said, Pattinson was recently reported to sign on to star in the upcoming thriller Brimstone , in which he will play an outlaw, and most of his post-Twilight roles deal with a lot of life and death situations, as well as sex, war, and history. So, without further ado, here are four Robert Pattinson movies to watch if you're so over Twilight.

Rey In The Rover

In The Rover, Pattinson got dark and gritty for a film set 10 years after a global economic collapse in the Australian outback. If there's one thing Edward Cullen couldn't do, it was risk blinding his admirers with his sparkling body, so he would definitely go nowhere near these barren stretches of land.

T.E. Lawrence In Queen of the Desert

Pattinson plays famed archaeologist T.E. Lawrence (of Arabia) opposite to Nicole Kidman's Gertrude Bell. Bell was a revered British explorer, writer, and archaeologist in the early twentieth century. IndieWire says of Pattinson's performance: "Pattinson doesn't get very much screen time here, but manages to come up with a Lawrence a universe away from Peter O'Toole's iconic portrayal... His dialogue exchanges with Kidman have a little touch of Steed and Mrs. Peel that at least gives their scenes some kind of oomph."

Pattinson's latest completed film, Life , premiered at the Berlin Film Festival in February 2015. The film is told from the point of view of Dennis Stock, a LIFE photographer who shot some of James Dean’s most iconic photographs. James Dean is played by Dean DeHaan, and the film features Pattinson putting on an impressive wise guy accent.

Jerome Fontana in Maps To The Stars

David Cronenberg's Maps to the Stars takes a look at the dark side of celebrity and blurs the lines between real life and fantasy as many of the characters go through nervous breakdowns of sorts. Pattinson has the role of Jerome Fontana, a handsome limo driver and aspiring actor, who befriends Havana Segrand (Julianne Moore) and her assistant, Agatha Weiss (Mia Wasikowska). You won't really know what to expect in this dark comedy, except that Pattinson shares a steamy love scene with one of the main characters. Edward Cullen would blush at the thought.

More like this
22 Movies On Netflix That Are Perfect For The Whole Family
By Bustle Editors
What Is Ben Affleck's Net Worth? At 50, The Oscar Winner Makes 8 Figures Per Film
By Meg Walters
Amanda Seyfried Says She Felt Pressured To Shoot Nude Scenes At 19 Years Old
By Jake Viswanath
Someone Must Pay For What Happens To Bad Bunny In 'Bullet Train'
By Arya Roshanian
Get Even More From Bustle — Sign Up For The Newsletter