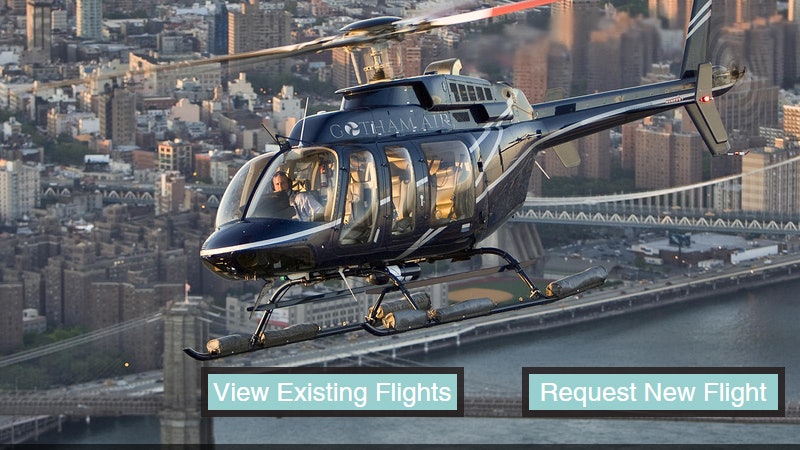 Uber is cool and all, but automobiles are so passe. Wouldn't it be awesome if you could Uber a much more elite vehicle, one that could tell the world "I'm so fancy" — like, say, a helicopter? Then I have good news for you: Gotham Air, a company that's been called "the Uber of helicopters," has finally arrived. It's about damn time we combined ride sharing with helicopters. I'm pretty sure we've finally reached the height of luxury. What a time to be alive!

Here's how Gotham Air works: First, you download the app on your iPhone or Android device, or you can go online to their website. Anytime between 8 AM and 8 PM, you can log on and request a helicopter ride — although for now, you can only get a ride in New York to either Newark or JFK airports. It will get you to the airport in under 10 minutes, so no need to wait in traffic. How cool is that?

There are a few catches, though: First, since this is a ride-sharing helicopter app and not a privately chartered helicopter app, at least three other people have to book the same trip in order for it to happen. And second, did I mention the price? It's over $219 per person for a six-minute ride. Six minutes. Seems reasonable. Or... not.

I'm going to go out on a limb here and say that unless you're Jay-Z, Gotham Air probably isn't worth it (you can take a cab to the airport like the rest of us plebians). But that doesn't mean I don't appreciate the thought put into this idea. A for effort, guys — really. Come to think of it, even though I personally won't be using Gotham Air, wouldn't these other ideas make great "Uber of..." services?

Real talk, going to the supermarket is the worst! I don't know why, but I do know that I always put off grocery shopping for as long as possible. But wouldn't it be awesome if you could open up an app, select the groceries you want, and have it delivered to your house?! I think it would. Good thing there's Fresh Direct, right?

You bring a guy home from the bar (or wherever)... you're about to get it on... but suddenly, you come to a horrifying realization: Neither of you has protection. What do you do? Odds are, you're not getting dressed to go to CVS to pick up some condoms... should you just risk it? Heck no! With Uber for condoms, you could go onto your phone, hit a button, and Trojans would arrive at your doorstep within minutes. And the best part is, just like Uber the app would sync to your credit card — no awkward interactions with the delivery guy required! Clearly what we need is for L. condom delivery service to develop an app and expand beyond San Francisco, Brooklyn, and Manhattan.

Say you're vacationing on a lake or other body of water, and all you can afford is a lousy jetski. But if you could Uber a yacht, you and your friends could have the "I'm on a Boat" party you've always dreamed of — without needing to, you know, buy a boat. Seriously, who wouldn't want this?!

Why plan out your prom night when you can just wing it? It would save a lot of drama if you just chose your limo on the fly. I'm just saying.

So I know technically Uber has a day where they will deliver puppies to your office, but that's not good enough! I want more pets, more of the time! Why can't you send hedgehogs to my office for me? I know that they're technically illegal to have as pets in Georgia, but I don't care! Bonus points if they're rescues — nothing beats helping a furry, feathered, spiky, or scaled friend find their forever home.