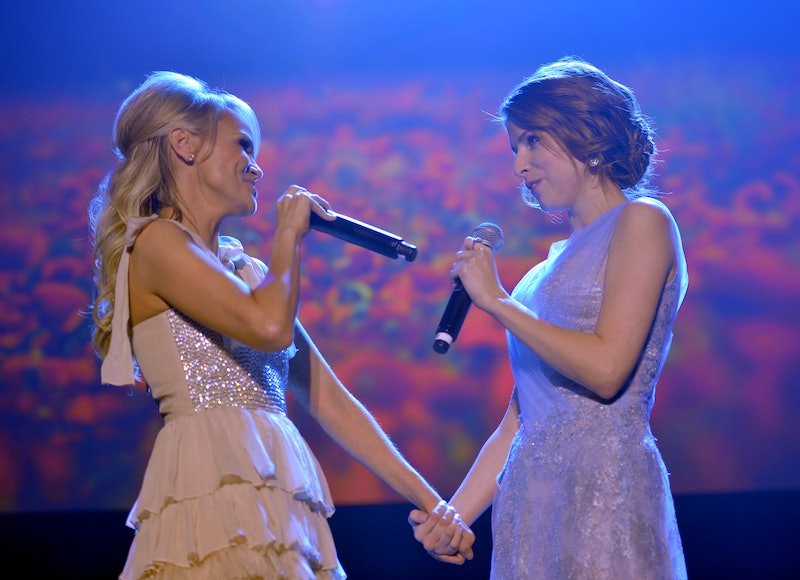 Well here's something to liven up the Academy Awards: Anna Kendrick is performing at this year's Oscars. What is she performing, you ask? Nobody knows! They're being very vague about it. But we know two things, by instinct, experience, and further vague hints: It's gonna be a highlight of the night, and it's gonna be something "special" and unique to the Oscars.

For me personally the Oscars are at their best when they're at least half-pretending to be the Tonys. Remember Hugh Jackman's (Emmy-winning) performance setting the 2009 nominees to song? That was pretty great. Given that both he and this year's host Neil Patrick Harris are Broadway stars who have both hosted the actual Tonys multiple times each, it's pretty safe to say that this year's Oscars are going to be plenty musical. Add to that the fact that Frozen "Let It Go" songwriters Robert Lopez and Kristen Anderson-Lopez are signed on to pen a song for the show and, well, yeah, we're in for some memorable musical moments.

So what is it that Kendrick will be doing? She announced her participation in the ceremony through Twitter Monday afternoon, though her tweet didn't exactly spell out what her performance would entail:

Buzzfeed's Jarett Wieselman added but a wee bit more conjecture to the speculation:

A comment like that reminds me of the moment from that 2009 ceremony when Anne Hathaway took the stage with Jackman:

It's unclear, though, whether Kendrick's performance will be more of a solo excursion than that moment for Hathaway.

Of course, Kendrick is probably very used to being asked to perform special things. She was nominated for her first Tony when she was a pre-teen, after all, and was nominated for an Oscar herself in 2010 for Up In the Air.

Here she is performing at the Kennedy Center Honors for Shirley Maclaine in 2013:

And singing "For Good" with Kristen Chenoweth last year:

Basically, whatever the Oscars producers throw at her, I'm sure Kendrick will nail it.