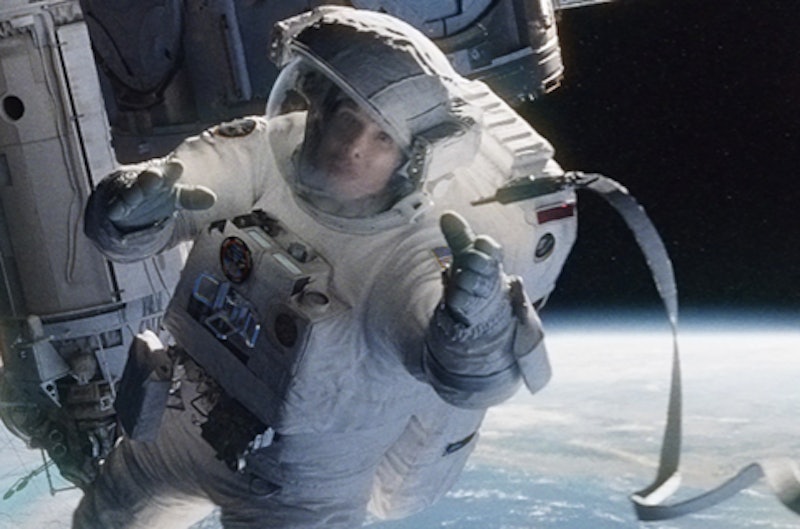 First off, let me be the first to apologize for every space pun you're going to have to endure in the coming weeks and, undoubtedly, throughout this entire awards season: Gravity pretty much completely crushed all competition at the box office this weekend. In fact, it proved to be the best first weekend haul in the careers of both of its two major movie stars.

Cloudy With a Chance of Meatballs 2, which took home top dollar in last weekend's box office competition, came in second after Gravity this time around with $4.7 million gained this weekend for a $59 million total for its week in theaters. Meanwhile, Ben Affleck and Justin Timberlake are probably sad somewhere because their Runner Runner took home a paltry $2.8 million, which sounds like a whole lotta college tuitions to us normals, but when you consider that it took $30 million just to make the movie in the first place is kinda sad.

More like this
At 28, Lesley Manville Was Acting, Picketing, & Singing Kate Bush Songs
By Olivia-Anne Cleary
Reese Witherspoon Gave Fans Hope For 'Legally Blonde 3' After This Surprising Movie Inspired Her
By Jake Viswanath
22 Movies On Netflix That Are Perfect For The Whole Family
By Bustle Editors
Where Was 'The Bachelorette' Season 19 Filmed? More European Destinations Are On The Way
By Radhika Menon
Get Even More From Bustle — Sign Up For The Newsletter