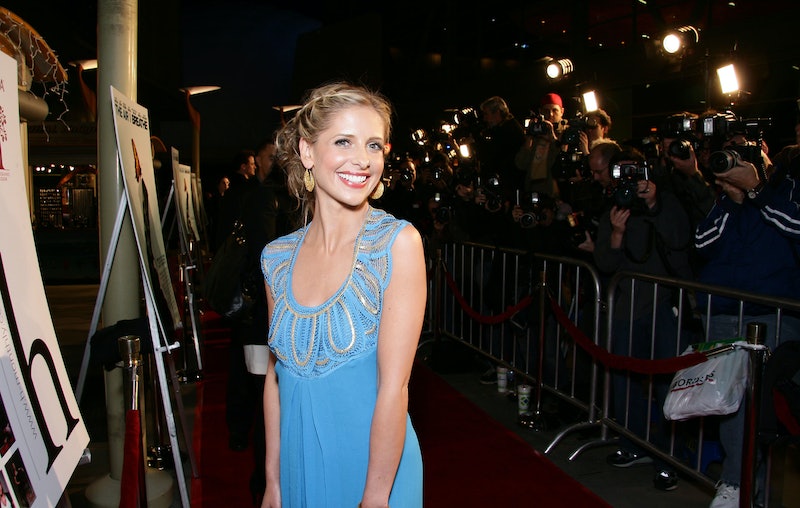 In early October, Sarah Michelle Gellar did the unthinkable. In an interview with CBS news, she said of her new show The Crazy Ones, “I've been in this business for 33 years and it's the most fun I've ever had.” Excuse me? SMG is telling me that getting paid to hang out with Joss Whedon, point scary weapons at frightened extras in prosthetics, and play one of the most pioneering feminist icons of the nineties wasn’t the most fun of her life? To that I say: here is my thinly concealed outrage, Sarah Michelle Gellar.

I used to live and breathe Buffy the Vampire Slayer. When I was homeschooled in the sixth grade, I used to wake up at 7 a.m. and start my work just so that I could finish at 1 p.m. and spend the rest of the day powering through BTVS episodes (yes, it was a sad year). Why? Apart from the quippy humor and lovable characters, Buffy made me feel like I could be tough and strong, speak my mind, and slay dudes who tried to sink their fangs into my neck.

I admit that I struggled with the character of Buffy Summers on a personal level. Her preachy speeches (ahem, Season 7), non-communicativeness, and sanctimonious attitude toward the rest of the Scoobies—who she frequently seemed to forget also made big sacrifices and carried weighty responsibilities—frustrated me. But at the end of the day, I respected her for what she deep at her core: an unflinching, unapologetic feminist.

When Buffy Summers moved to Sunnydale, she was just a pretty blonde misfit teen. Then, she found out she was the chosen one, destined to slay the vampires and demons of the world. How did she react?

That’s right. Instead of backing away for the challenge or searching for a man to protect her, she learned how to fight. Consequently…

But they were trying, really, really hard. Take Spike in Season 2. All he wanted was to kill his third slayer. He had managed to kill others relatively easily before, slayers with more training and experience than Miss Summers.

Obviously, it didn’t work. In fact, by Season 5, Spike was fighting on her side and falling in love with her. But Buffy didn’t have time for his infatuation—she was too busy saving the world and enjoying a far healthier (at the time) relationship with her college sweetheart, Riley. Which brings me to my next point: Buffy was more than just a slayer and all-around badass, she was a complex person with complex feelings. Case in point, her tragic relationship with her first love, Angel.

Buffy loved Angel, and she did her best to work through their relationship, but when he turned evil and threatened the safety of the world, she did what she had to do. She never let her lover control her or stop her from achieving her destiny. If anything, Buffy the Vampire Slayer was about a young woman who loved her friends, herself, and the world, more than any boyfriend.

Oh, and who despite being a dainty blonde who some might have mistaken as ditzy, inspired real fear in the hearts of the creatures that go bump in the night.

Here’s to you, Buffy Summers. You might not have been Sarah Michelle Gellar’s most “fun” role, but you certainly were her most important.

More like this
The 'Hocus Pocus' Sequel Finally Has A Release Date & It Makes Total Sense
By Shannon Barbour and Radhika Menon
Sandra Bullock, Girlboss Extraordinaire
By Matt Harkins & Viviana Olen
Penn Badgley & Leighton Meester Met On A Horror Movie Set Before 'Gossip Girl'
By Jake Viswanath
Selena Gomez’s ‘SNL’ Hosting Debut Had Twitter Gushing Over ‘Barney’ & Wigs
By Stephanie Topacio Long
Get Even More From Bustle — Sign Up For The Newsletter