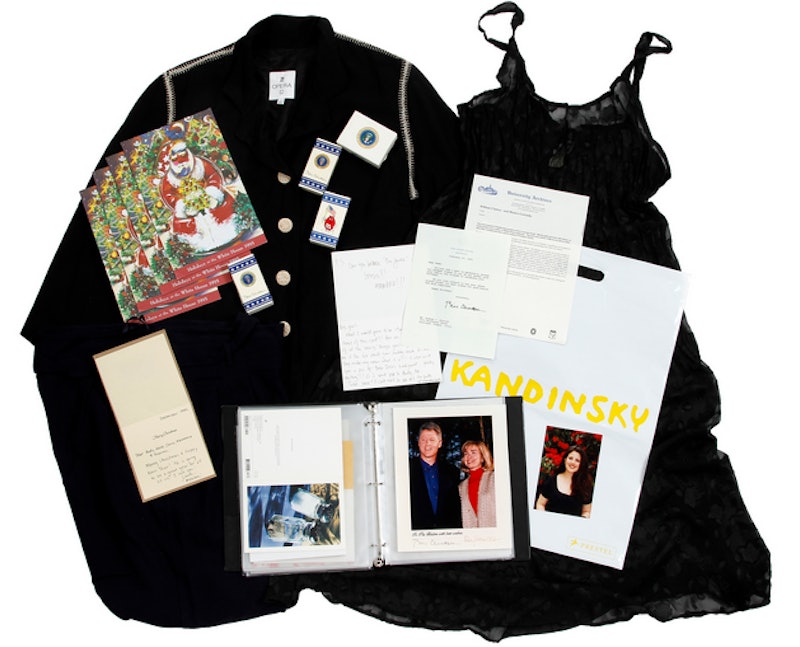 Look for an extra special, historically inspired Valentine's Day gift for that special someone in your life? Want to give your sweetheart a sexy little number for the holiday this year? Big fan of American scandals and/or stationery? Luckily for you, there's a gift out there that meets all of those requirements. Throw in a handful of slightly bizarre memorabilia and you will have the Monica Lewinsky–themed Valentine's Day gift bag of the century — complete with nightgown. Yes, Monica Lewinsky's lingerie (along with other bizarre items) are being auctioned off online. Well, they were.

The items include not only the nightgown, but also a handful of letters and cards from both Lewinsky and Clinton. The big deal (apparently) is that Clinton wrote one of those cards (per Lewinsky's request) to Andrew Bleiler, who Lewinsky also had a relationship with at the time. I know, it's all very confusing. Confusing and very, very strange.

According to the Washington Post, the set of items originally came to auction with an undisclosed minimum bid set and was only met with two offers. I know what you're thinking, "What? Only two? It's an American history treasure chest, for Christ's sake!" What can I say? Apparently people aren't that into it right now. Well, that's not entirely true. The top bid did max out at $13,750, and wasn't accepted. That means that the minimum bid for the bundle was most likely above $14,000. For some letters. And a nightgown. Let that sink in for a second.

However, if you happen to be wondering how you can somehow get your hands on all of this great, totally practical and not creepy at all set of items, don't worry; there's still hope. According to the Washington Post, the auction house that was in charge of everything says that the seller can re-list the items and that it often takes a few times before the minimum bid is hit. Long story short, the most likely scenario is that the seller will re-list the items. Oh — and if you're wondering who the seller is, that information isn't disclosed either.

The good news? Whoever owns all of this stuff is smart enough to know not to identify him/herself. The bad news? That person could be literally anyone. Trust no one. While the entire bundle (and the extreme amount of money behind it) is super creepy, at least now we now know that whatever we get for Valentine's Day cannot possibly be as strange as this little bundle.