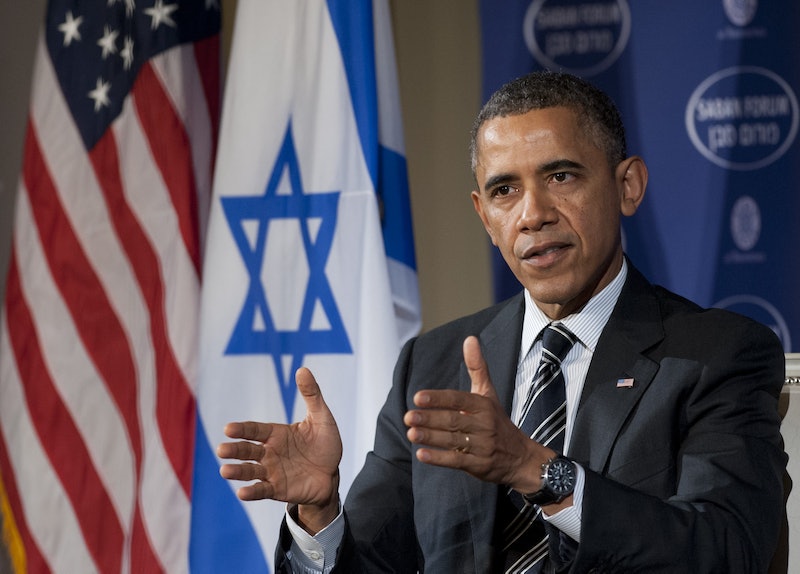 U.S.-Israeli ties are at an all time low, what with the diplomatic debacle that is Israeli Prime Minister Benjamin Netanyahu's scheduled visit to Congress to talk about Iran. Invited by House Speaker John Boehner without first going through the White House — as he should have — Netanyahu will visit two weeks prior to the Israeli elections, the timing of which the Obama administration has pointed out was too close to each other. As Democratic lawmakers and the administration voice their protests and anger over the scheduled visit, President Obama himself has remained silent — up until Monday. When asked about the incident in a joint press conference with German Chancellor Angela Merkel, Obama voiced his opposition to Netanyahu's visit, citing the timing of his invitation as a mistake.

While reiterating the White House's previous line of the two leaders being in constant contact with each other, Obama added:

We have a practice of not meeting with leaders right before, two weeks before an election.

One vital point of criticism that the White House has also levied toward Netanyahu's March 3 speech at Congress to make a case about stepping up Iran sanctions — amid Obama's ongoing efforts to come to a deal with the Middle Eastern country regarding its nuclear weapons — is also that the Israeli leader's visit will be in line with the Republicans' protests against the U.S.-Iran negotiations. The move is seen by many in the Democratic party as Netanyahu's attempt at capitalizing on the fractious relationship between the GOP and Democrats.

The president noted in the press conference that the U.S.' relationship with Israel was not between any two political parties of either countries. He said:

But Obama also frankly acknowledged the dispute with his Israeli counterpart over Iran, while questioning the latter's seeming refusal to allow the U.S.-Iran negotiations to succeed:

I don't want to be coy. The prime minister and I have a very real difference around Iran sanctions. It does not make sense to sour the negotiations a month or two before they're about to be completed.

What the rush? Unless your view is that it's not possible to get a deal with Iran and it shouldn't even be tested. And that I cannot agree with, because as president of the United States I am looking at what the options are if we don't get a diplomatic resolution. Those options are narrow and they're not attractive.

To some extent, Netanyahu's attempt at pressing U.S. lawmakers on Iran seem to have backfired, as many Democratic politicians, angered by the scheduled speech, have pulled back from the threat to increase sanctions against the country in a show of support for the president in this situation.

According to NBC News, Obama also pointed out, while standing next to Chancellor Merkel, that unlike Netanyahu, it wasn't likely that she would have agreed to visit Congress so close to domestic elections — perhaps a backhanded denunciation of the Israeli leader's tact. He said:

As much as I love Angela, if she was two weeks away from an election, she probably would not have received an invitation to the White House. And I suspect she wouldn't have asked for one.