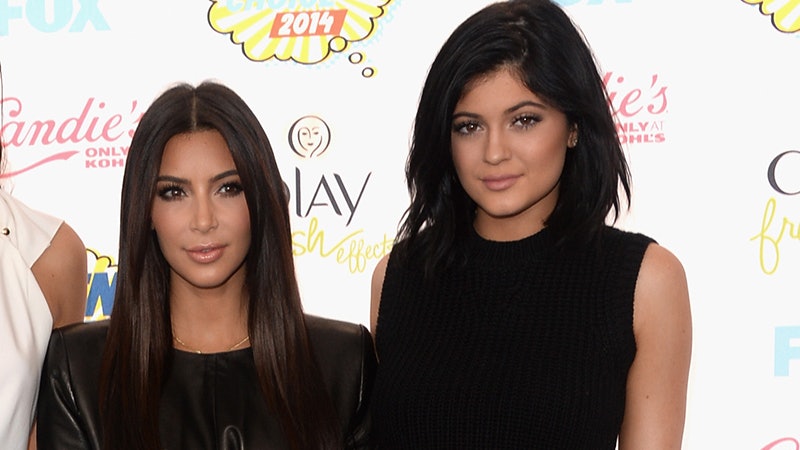 All the Kardashian sisters (Jenners obviously included) have their own unique style. I have total faith that you could tell flat lays of a Kim outfit from a Kendall outfit instantly. Still, there are definitely some connective tissues between them: body con fits, strappy heels, cleavage showing... that sort of thing. I mean, they are all related via Kris K, so it's logical that they'd have a similar style sensibility. In fact, Kylie Jenner looks exactly like Kim Kardashian pretty frequently — and definitely more so than any of the other sisters. Jenner is the youngest sibling in the family while Kim is the second born and most famous of the whole crew, but they could be twinsies (at least style-wise).

While Kylie has shown herself to be the black sheep of the Kardashian fashion clan, allowing her youth and rebelliousness to inform her fashion choices, she certainly shares Kimmy's penchant for adventure when it comes to her closet.

There have been times where Kylie's resemblance to Kim has been uncanny and almost unsettling. Yes, they are related, so, duh, they're bound to look alike. Still, even at times when Kylie is basically a mini Kim, she always retains her signature Kylie-ness. But for Kim, it must be like looking in a mirror and being transported to her teens.

Uncanny, isn't it? Is that Kim or Kylie? It could be either, right? (It's Kylie — the nails are a dead giveaway.)

Here are 16 other times that Kylie Jenner looked exactly like Kim Kardashian.

With her pitch black extensions and poppin' cleavage, this was Kylie at her most Kim-like.

Thanks to this clingy, square-shouldered white frock, which hugged every curve, Jenner kribbed liberally from Kim's fashion playbook.

Kylie and Kim have identical eyes... don't you feel like those are Kim's eyes in Kylie's head?

Another way that Kim and Kylie are super similar? Oh, just their amazing lashes.

Kylie's glamsual look reminded us of Kim — contoured, fully made up, and in love with taking selfies.

Despite the daggers and the pouty lips, which are not Kim signatures, Kylie channeled her sister with her long, lush, and midnight black locks.

Kim loves selfies. Kylie does, too. The hair and brows were totally Kim-like.

When pictured with her big sis Kendall (and their dad, Bruce Jenner), the resemblance between Kim and Kylie is even more obvious.

Is that Kim hiding behind those shades? Nope, but it sure looks like it.