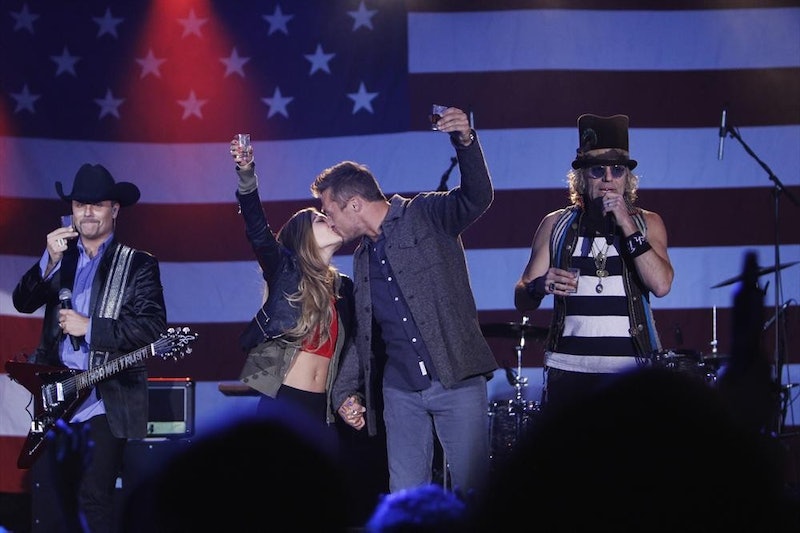 Oh, Chris Soules. I want to love you as The Bachelor, but unfortunately, I'm just kind of mad at you instead. Why? Let's start with Monday night's new episode. While Chris was on a group date with a handful of the women competing for his heart, he stole Britt away for a surprise: A Big and Rich concert. When she came back about an hour later, she had a rose in hand, much to the rest of the women's dismay, and Chris, knowing full well the can of worms he just opened and wanting to avoid dealing with it at all costs, made a quick exit. From that point forward, everyone basically alternates between bursting into tears and trying really, really hard not to say something rude to Britt, because after all, it's not her fault. And it all boils down to this: Chris is kind of a mean Bachelor .

And this is totally surprising, because when they announced him as the bachelor, I was excited we finally had a nice guy after the disaster that was Juan Pablo Galavis. From what we saw of Chris on The Bachelorette, I did not expect that he was this tactless.

And I mean, let's allow our previous Bachelorette explain why this isn't OK:

Not to sound like a pouty eight-year-old, but it's not fair. He ends up putting Britt in the most awkward situations ever, because it's not like she's going to turn down the opportunity to make a connection with the guy she's there to make a connection with. She's not going to not kiss him when he goes in to kiss her, but he probably shouldn't do that when there are a handful of women who want to be with him watching.

It wouldn't be so bad if he hadn't been doing this all season, but he totally has. He's been single-mindedly looking for a soulmate without considering anyone else's feelings, generally in the name of spending time with Britt. He's been kissing certain women more than others and essentially rubbing it in their faces. He woke Britt up last week in a room filled with other contestants and shushed Carly as he tried to whisk Britt away on a surprise hot air balloon ride. Best of all, he acts deeply insulted when someone calls this kind of behavior to his attention. And at the first opportunity, he heads out and lets everyone else deal with the aftermath, just like he did at the end of the Deadwood date. The women were upset, so he left and hoped it would dissipate in his absence. Chris, what the hell? Be a decent guy.

At this point, he'll be lucky if the woman he ends up proposing to at the end of the season even wants to spend the rest of her life with him.