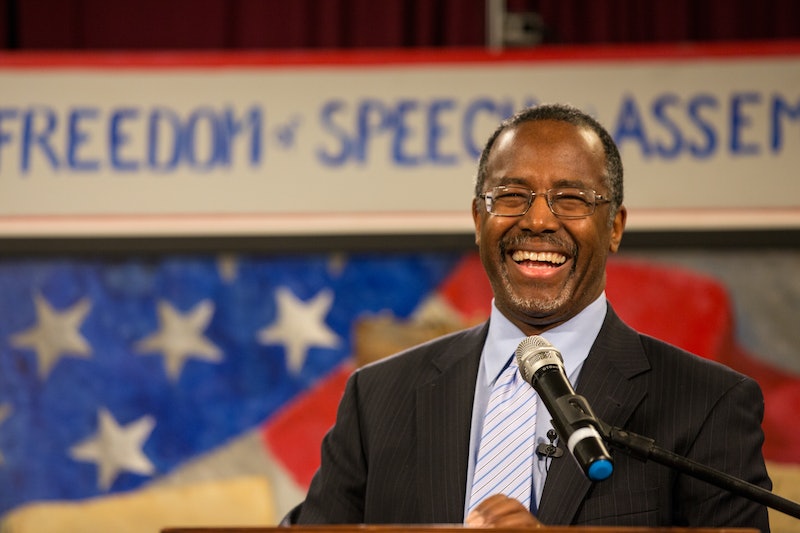 Ben Carson, a best-selling author and top commentator on conservative stations, has been exploring a bid for the 2016 Republican nomination, hoping to make the list of GOP presidential candidates. According to Reuters, Carson told “Fox News Sunday” that he plans to make a formal announcement in May. Well, Carson has already been named to one list, although it’s probably one he’s not excited about. The Southern Poverty Law Center (SPLC) has just added Carson to their “extremist files,” a list keeping track of many U.S. extremists, whether they are “white nationalists, anti-gay zealots, black separatists, racist skinheads, neo-Confederates, and more," according to the organization's website.

What’s the extremist ideology that landed Carson on the SPLC’s list? His anti-LGBT ideology. According to the new SPLC profile on Carson, he has made a variety of anti-LGBT remarks in public and even in some of his publications. Here are a couple of examples:

“Marriage is between a man and a woman. It’s a well-established pillar of society and no group, be they gays, be they NAMBLA [North American Man/Boy Association, a group advocating pedophilia], be they people who believe in bestiality—it doesn’t matter what they are, they don’t get to change the definition.” —Interview on Fox News’ “Hannity,” March 26, 2013

“[I]f we can redefine marriage as between two men or two women or any other way based on social pressures as opposed to between a man and a woman, we will continue to redefine it in any way that we wish, which is a slippery slope with a disastrous ending, as witnessed in the dramatic fall of the Roman Empire.” —America the Beautiful: Rediscovering What Made This Nation Great, 2012 book written with Candy Carlson

Not only has Carson compared LGBT people to pedophiles and suggested that giving consenting adults the right to marry other consenting adults would lead to something like the collapse of the Roman Empire, he’s also stated that the Affordable Care Act "is slavery, in a way."

It’s comments like this that have made him popular among Republicans and inspired Tea Partiers to begin lobbying for his candidacy. But it’s also comments like this that might hurt and further distance him from moderates. According to a 2014 Gallup poll, support for same-sex marriage has been increasing since the questions was first asked in 1996. In 2014, 55 percent of Americans believed that same-sex marriages should be recognized as valid under the law. Although it’s no surprise that 82 percent of liberals believe same-sex marriage should be legal, compared to just 31 percent of conservatives, 63 percent of moderates approved of it.

Overall, the trend shows that same-sex marriage is gaining more approval with the general population, including Republicans and conservatives. The kind of stereotypical and harmful anti-LGBT comments that have catapulted Carson into the public eye — and landed him on the SPLC's extremist list — might just be the same ones that will make him lose favor with the general public if he officially announces his candidacy in May.

According to Breitbart, Carson responded to the SPLC, calling them "haters" and stating:

When embracing traditional Christian values is equated to hatred, we are approaching the stage where wrong is called right and right is called wrong. It is important for us to once again advocate true tolerance. That means being respectful of those with whom we disagree and allowing people to live according to their values without harassment.

It’s funny how Carson calls for respect and allowing people to live their lives without harassment while his comments advocate for denying same-sex couples their right to be legally married and compare gays and lesbians to those who engage in pedophilia and bestiality. If that’s not harassment, I don’t know what is.