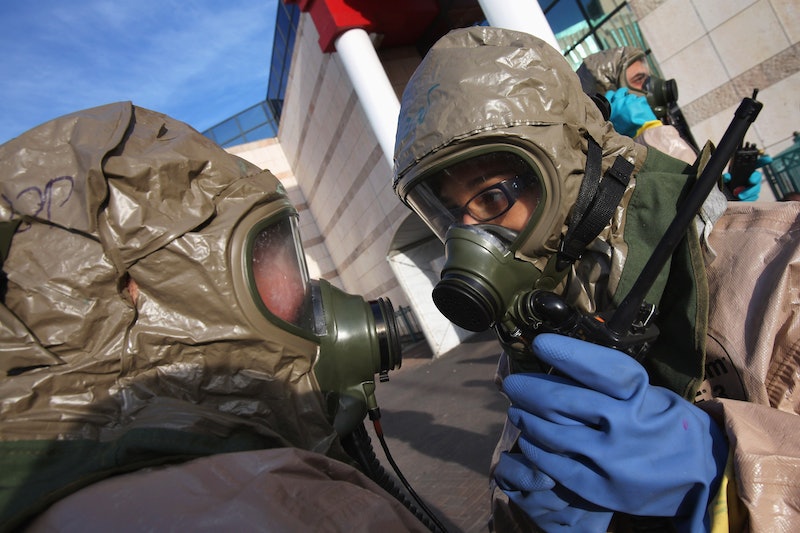 An international disarmament team began the process of dismantling and destroying Syria's chemical weapons stockpile Sunday, the first step in a 9-month-long process, according to the U.N. deal brokered by Russia and the United States.

The international experts, consisting of officials from the Organization for the Prohibition of Chemical Weapons (OPCW) and the United Nations, arrived in Damascus on Tuesday, but only started on the dismantling process Sunday morning. The work also includes destroying the equipment used to produce the chemical weapons, including the filling and and mixing machinery, but it's the Syrians that are responsible for the actual physical demolition of the materials — the inspectors are really just there to monitor the operation and check what's being destroyed.

"[The experts] have left for a site where they are beginning verification and destruction,” a source from the OPCW told the Telegraph Sunday.

The team has until the middle of 2014 to completely destroy Syria's estimated 1,000-ton chemical weapons arsenal, which is believed to include the nerve agents sarin VX and tabun, as well as mustard gas. And while the equipment itself won't be too difficult to destruct — inspectors are allowed to use pretty much any means necessary, even sledgehammers — eliminating the battle-ready chemicals is more complicated. It could involve converting the precursor chemicals, diluting them with water, or burning the materials in sealed furnaces. And to make matters more difficult, the storage and production facilities are thought to be strewn across the nation, in locations that range from trucks loaded with materials to actual production sites.

Meanwhile, however, President Bashar al Assad — whose regime is believed to have been responsible for the August 21 gas attack that incited the threat of U.S.-led punitive action — has not only indicated that he may not run for re-election next year, he may even be interested in the possibility of Germany acting as a mediator in the country's civil war.

According to Germany's Der Spiegel magazine, Asssad has said he "would be delighted if envoys came from Germany...to speak with us about the true state of affairs."

And although the Syrian President firmly denied his involvement with the August chemical attack, he admitted to having made mistakes, especially with regard to the government's crackdown on protestors.

"Each of us makes personal errors. We all make errors. A president, too, makes errors," he said. "But even if there were errors in the implementation, our fundamental decision was right."

The Syrian government began making chemical weapons in the 1980s, but the production stopped, according to Assad, in the 1990s. Nonetheless, chemical weapons have allegedly been used more than once in the bloody Syrian conflict, which began over two years ago and has since claimed over 100,000 lives. If the government fails to comply with the deadline imposed by the U.N. Security Council resolution to destroy the chemical stockpile, it faces the threat of unspecified measures.