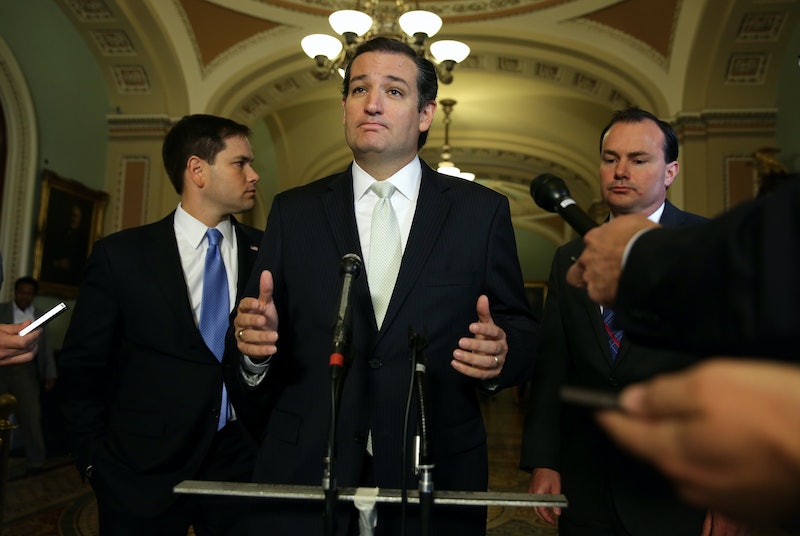 Upping the risk of an even greater economic crisis than the one the U.S. has seen this week, Sen. Ted Cruz is pushing for Republicans to use the upcoming vote on the nation's debt ceiling as leverage to put an end to Obamacare (because, clearly, that worked so well the last time) — just as the U.S. Treasury Secretary warns that defaulting on its debt will throw not only the U.S., but the world, into financial mayhem.On CNN's State of the Union Sunday, Sen. Ted Cruz said that "the debt ceiling historically has been among the best leverage that Congress has to rein in the executive," and should be used to do just that with President Obama's health law."We should look for ways to mitigate the harms from Obamacare," Cruz said, adding: "The president’s demand - jack up the country’s credit card with no limits and no constraints - is not a reasonable one."The nation's legal debt ceiling needs to be raised before October 17, if America is to avoid the risk of defaulting on it $16.7 trillion debt. But the fight over the debt ceiling has become embroiled in the stand-off over the government shutdown, and Congress isn't reaching agreements in either.

“Congress is playing with fire. If the U.S. government, for the first time in its history, chooses not to pay its bills on time, we will be in default,” said U.S. Treasury Secretary Jacob Lew. “Anyone who thinks that the United States government not paying its bills is anything less than default hasn’t thought about it very clearly."

According to Lew, the government will have roughly $30 billion by October 17 — and that's just half what it would need to cover basic requirements over subsequent days.

“That is a dangerously low level of cash, and we’re on the verge of going into a place we’ve never been. Even getting close to the line is dangerous,” he added.

But House Speaker John Boehner has said that Republicans would refuse to support a bill lifting the cap on the government's credit without first having fiscal negotiations.

"I don't want the United States to default on its debt," he said. "But I'm not going to raise the debt limit without a serious conversation about dealing with problems that are driving the debt up. It would be irresponsible of me to do this."

He also maintained that Republicans would not support a "clean" spending bill (i.e. sans Obamacare amendments) to end the government shutdown, maintaining that the option just wouldn't have the votes to clear his chamber.

"There are not the votes in the House to pass," Boehner said, adding: "We voted to keep the government open. Providing fairness to the American people, under Obamacare, is all we're asking for."

But other legislators have been less than convinced by Boehner's assertions.

"Why doesn't he put it on the floor and give it a chance?" Lew said on CBS' "Face the Nation."

"The speaker said there aren't the votes on the floor to re-open the government," echoed Sen. Chuck Schumer. "Let me issue him a friendly challenge: put it on the floor Monday or Tuesday. I would bet there are the votes to pass it. We have just about every Democrat, 21 Republicans have publicly said they would. There are many more Republicans who have said that they privately would. So, Speaker Boehner, just vote. Put it on the floor and let's see if you're right."

Much of the federal government has been closed down since Tuesday, when the new fiscal year began without Congress having reached an agreement over its constantly mutating spending bill. Since then, Republicans have been urging Democrats to offer concessions over the President's health law, in exchange for restarting the government — but Democrats have maintained a refusal to bargain with a gun to their head. Thankfully, though, the U.S. Secretary of Defense said Sunday that most of the Department of Defense's 400,000 civilian employees have now been ordered back to work, as a result of a measure that was passed earlier this week to ensure that military personnel would continue to get paid even through the shutdown.