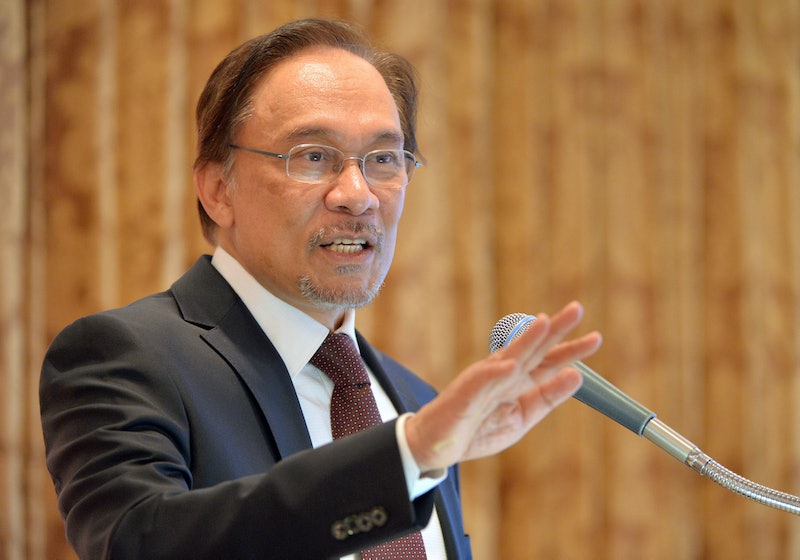 Across the world, figures who pose a great threat to those in power are often persecuted under false — sometimes preposterously so — allegations. On Tuesday, the highest Malaysian court upheld opposition leader Anwar Ibrahim's sodomy conviction, inciting deep anger within the country for its sham of a judiciary and prompting the U.S. to issue a rebuke of Malaysia's decision.

In a statement issued the same day as the court's rejection of his appeal — and also published on the U.S. embassy website — spokeswoman Bernadette Meehan was careful to note the "strong partnership" between both countries before reiterating its concerns over the fairness and transparency of the judicial system. The statement read:

The United States is deeply disappointed and concerned by the rejection of Anwar Ibrahim’s final appeal and his conviction...

The decision to prosecute Mr. Anwar, and his trial, have raised serious concerns regarding the rule of law and the independence of the courts.

Anwar's conviction marks the third time the charismatic opposition leader will be put behind bars for sodomizing a political aide, a charge that he and other opposition lawmakers denied as a fabrication to end his political career. Sodomy is illegal in the Muslim-majority country, and punishable by up to 20 years in prison.

Acquitted of the sodomy charge in 2012, a higher court overturned the decision in 2014 and sentenced him to five years in prison, effectively stripping Anwar of his parliament seat and disqualifying him from running in the next elections, due by 2018.

Other international bodies criticized the ruling as well — the UN Human Rights office, along with Australia, expressed its disappointment, and Amnesty International said it would have a dangerous effect on freedom of expression. Human Rights Watch issued a statement castigating the rejection of his appeal:

The conviction of opposition leader Anwar Ibrahim after seven years of politically motivated proceedings under an abusive and archaic law is a major setback for human rights in Malaysia.

The contentious ruling comes directly in the wake of the New York Times' scathing exposé of the deep channels of corruption in Malaysia that implicates Prime Minister Najib Razak and his dubious connections to real estate holdings in New York City. Critics accuse Najib and his coalition of manipulating the judiciary in an attempt to eliminate the threat Anwar poses to their hold on power, but Reuters reported that the government rejected the accusations in a statement released after the ruling:

Malaysia has an independent judiciary, and there have been many rulings against senior government figures.

The ruling also might prove to be bad news for Najib amid his quest to improve relations with the U.S. In December, the Malaysian leader was criticized for traveling to Hawaii to play golf with President Obama — what Najib called "golf diplomacy" — while the country faced the worst flood in decades. In early 2014, Obama made an official visit to the South East Asian country, the first by an American president since 1966.

Though it's unclear whether the White House's concern with the ruling ends with the statement, spokeswoman Meehan urged in the statement:

Fairness, transparency, and the rule of law are essential to promote confidence in Malaysia’s judicial system and democracy.

Over the past two decades, following his fall-out with the ruling coalition in the '90s, Anwar has become the singular uniting figure in a haphazard opposition that emerged as the biggest challenger to the ruling government in decades, winning the popular vote in Malaysia's 2012 elections. After the ruling, Reuters reported that Anwar defiantly read a statement in the court, before embracing his weeping wife and family. He said:

I will walk again for the third time into prison but rest assured that I will walk in with my head held high. I maintain my innocence.