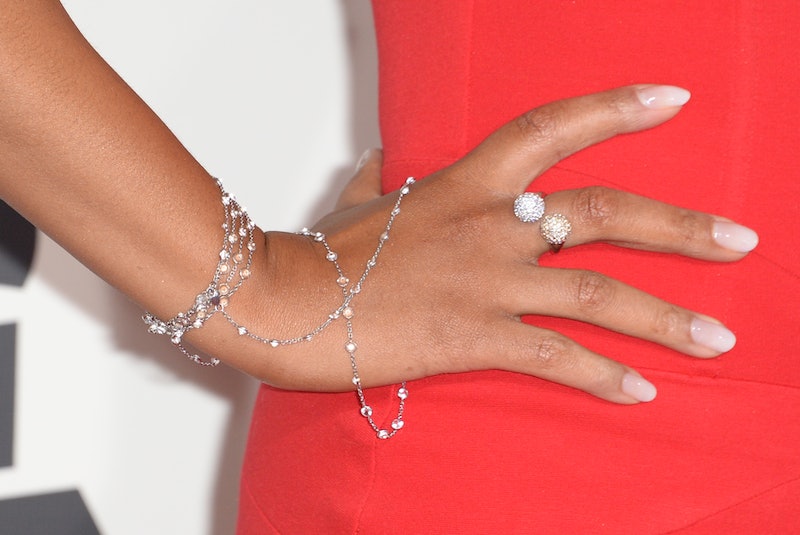 There's a reason why I love the manicures that most designers choose for the models gracing their runways at Fashion Week: They're attainable. Picking simple, neutral nail designs that allow the clothing to shine is a smart move on their end (mostly because it makes me feel good about myself when I'm able to pat myself on the back for "getting the runway look" with two coats of nail polish). But just like how the hair dresser at my old salon whined about "never getting to do anything fun because everyone just wants subtle highlights," you can imagine that nail companies wish they had a bit more creative freedom to show what they can do during such a huge occasion. Well, it turns out that nail companies actually pay the designers to sponsor the shows. Yes, companies with a full line of whimsically-named colors are paying top dollar to brush on a few coats of nude polish and get their lines in front of the eyes of editors, writers and bloggers.

This does have the potential to lead to conflict, when the nail brand doesn't feel like they're getting their money's worth of exposure. Freelance manicurist Alicia Torello told Fashionista that sometimes it leads to problems: "One of the designers was like, 'We really don't want anything,' and the sponsor was like, 'You kind of need to do something.' I had to figure out how to make that happen. I was like, 'Okay, let's do a nude moon on a bare nail.'"

So... is it worth it? "I completely understand that when we talk to editors, we want to give them a story to talk about — but we should never say sorry because it's sheer pink. Sheer pinks are incredible sellers for brands. If it's a sheer pink, be really strong and confident about why it works with the collection," nail polish maven Deborah Lippmann told Fashionista. Lippmann has been doing manicures backstage at fashion week since 1994 and has her own wildly successful line of music-inspired nail polish, so she knows a thing or two about the subject. She's also decided to opt out of the madness, and refuses to pay to sponsor shows, citing that covering the costs of labor and nail polish is enough. Most of the designers she's worked with agree and have kept her on, after all these years. For companies and artists just starting out and trying to make themselves known in a super-saturated market where sales of nail products are on a downturn, they might not have the luxury.

But what about you, then? Not modeling in any shows at New York Fashion Week this season? Weird, me neither. So how about you give yourself a DIY nude manicure with one of these shades — because if you ask me, a nude nail can actually be quite chic: