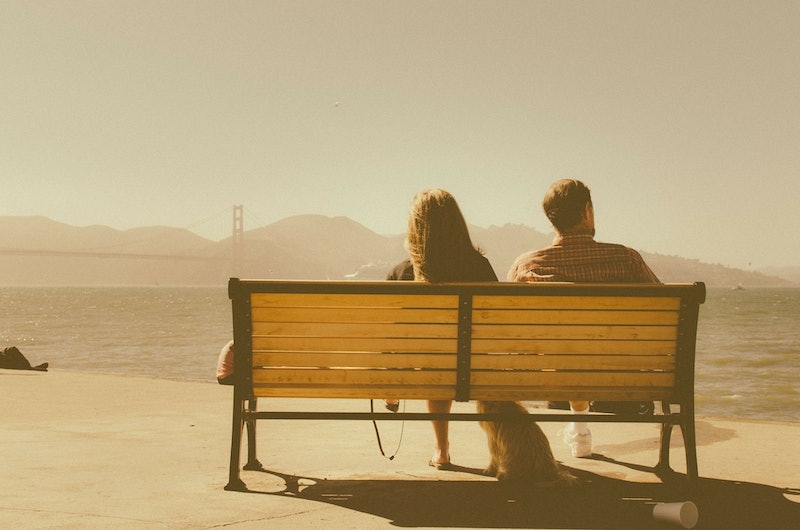 Getting engaged seems like fun. I'm not engaged, but if that ever changes, I feel like I'm going to be one of those people who talks about nothing else but my engagement for the entire term of said engagement. Which is why I'm making sure my friends and family REALLY love me before I get engaged, lest they find me intolerable and completely disown me. Other than the potential for you to turn into a total engagement monster, there are other reasons why you should maybe wait a little longer to get engaged. When you're in a serious relationship, getting engaged is, for many people, the logical next step.

There are no hard and fast rules about how or when you should get engaged. Obviously, life plays out differently for everyone, and what some people are ready for after a year of dating, others might take five years to find. What matters is that you don't force anything where it doesn't belong, and that you don't rush into anything because you think it's what's expected of you. You should generally strive to do things at your own pace—especially love. Every couple has a unique story, and you shouldn't press yourself or your relationship to adhere to any kind of plan or timeline you see being set by other people in your life. The variations in our stories are what make happy hour with your friends so much fun—no one will be interested in hearing your engagement story if they've heard the exact same story a million times.

But if you are starting to suspect the time might be right in your relationship, first, you need to do a little soul-searching. If you're thinking about getting engaged, but aren't really sure (because let's be real, has anyone in the history of the world ever been 100% gung-ho sure about anything? Doubt isn't necessarily a sign that you shouldn't do something; it's natural and healthy to be nervous about all big life decisions!), here are six signs that maybe you should delay the drop-to-the-knee bit a little longer.

Like I said, doubt is fine and natural. But if you know in your heart that you're just not ready, either personally or as a couple, for engagement, then go with that instinct. It doesn't mean that you'll never be ready, it could just mean that you need some more time to work it out. It's much easier to put it off for a bit than to make the commitment and have to recant.

2. You have major, un-resolved problems with your significant other

You and your SO might have issues that are never fully resolved, and that's fine. But if they are big, hot topic issues that come up again and again and you can't even find a way to live harmoniously with them, then you've got some work to do, and getting engaged isn't the answer. You want to go into a life-long commitment knowing that whatever the issues are, you'll at least be able to make compromises that leave you both content, because not every problem is possible to solve completely. If you're not at the point where the two of you can see eye-to-eye on conflict resolution, then a lifetime commitment isn't your next step.

Engagement will always be there. It's not going anywhere! And if you're a teenager or in your early 20s, you've got years ahead to get engaged. Some of the happiest couples I know met in their late-teens and were together for ten years before tying the knot. You don't have to be engaged to be with someone forever, and when you're young and still working life out (together, of course!), there's no reason to rush to put a ring on it. In fact, it might even be more fun to wait, at least until you can drink at your own wedding.

4. You're still not financially stable

Engagement and marriage are as much financial unions as romantic ones (well, actually, they're probably more so). You don't have to be wealthy to get engaged, but it's prudent to enter a union when you're both financially stable. If one of you is floundering, it could lead to potential issues down the track. Also, I happen to believe both people in a partnership should have some degree of financial independence. You want to enter a marriage knowing that you can take care of yourself (or even your whole family) should things go awry.

5. There are other things you want to do first

As I mentioned already, engagement is a step in a relationship. It's the step that leads directly to marriage, which (sometimes) leads to children, and for better or worse, growing into wrinkly, old people together. You won't necessarily have kids right away, you may not even want kids; but getting married slows the pace down, and settles you, so if there are any crazy things you have left on your bucket list, you might want to hold off on marriage until you get other things done first. It's not that you'll never get the chance to do these things, whether they're personal, travel or work related, it's that you don't know when you might get the chance to do them. With all the commitments of marriage, you might find yourself hard-pressed for You Time.

6. You're perfectly happy the way you are

And then there's the reason that has nothing to do with being ready or not: you're just happy with your relationship exactly as it is. That's perfectly acceptable. Society puts a lot of pressure on couples (and especially on women) to be married as quickly as possible, but if you don't want to go there yet (or at all), that's completely wonderful. If you're happy, and your SO is happy, then you've covered your bases, and no one needs to put a ring on anyone else's finger to prove anything to anyone.