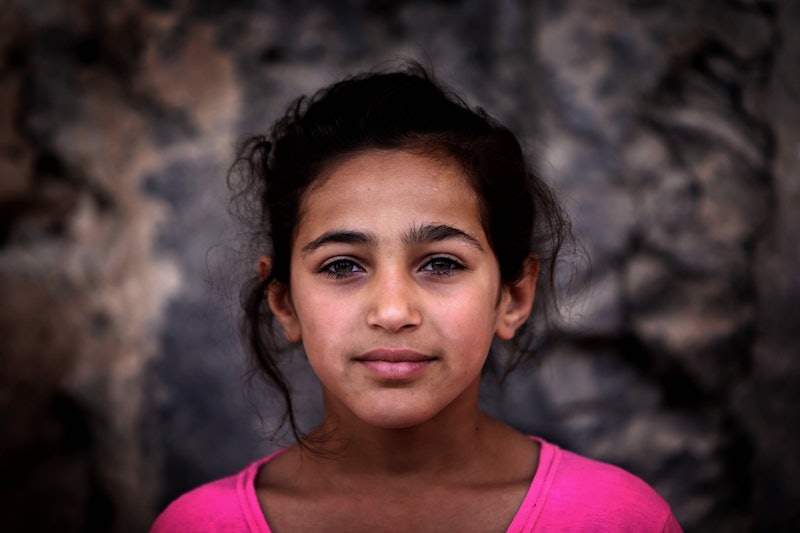 So you’re at a party, and someone says something ignorant . And while you know that they’re in the wrong, and that you could totally engage them and win if you were a bit more prepared, your words escape you. To make sure that doesn’t happen, we’ve compiled a series of handy reference guides with the most common arguments — and your counter-arguments — for all of the hot-button issues of the day. This week’s topic: How to argue for mandatory vaccination in public schools.

Common Argument #1: Vaccination Should Be A Personal Choice, Not A Requirement

It's not hard to understand why people get wary about vaccinations, despite there being no real reason to. Everyone wants what's best for their children, after all. But sometimes, when junky and fraudulent science gains enough of a foothold that people are making wildly dangerous choices for their children's health, a drastic counter-measure needs to be taken.

Even more to the point, it's not just a "personal choice," because it has far-reaching implications. High vaccination rates produce so-called "herd immunity," allowing people whose immune systems are too weak to sustain a vaccination — recovering cancer patients, for example. Deciding not to vaccinate isn't just putting one's own child and other otherwise healthy children at risk, it's also endangering the most vulnerable and in need of care.

Common Argument #2: You Say Vaccines Are Safe, But I Know They're Not

Here's the impasse, huh? You say that vaccines are unsafe, thanks to controversial trace ingredients and an utterly discredited, fraudulent study linking vaccines to autism from over a decade ago. I counter that there's never been any proven link between autism and vaccination, not in any of the countless other, credible, non-disgraced studies over the last several years. And in the end, you hope it'll look like a wash — some points on your side, some on mine, right?

Wrong. Sad to say, sometimes people can make the most awful choices imaginable for their children. And however well-intentioned the reasons, they usually don't override the law. You think hitting your child will teach them boundaries and respect? Doesn't matter, that's abuse. You think wearing seat belts/car seat restraints somehow actually increases your child's likelihood of dying in a crash? Doesn't matter, that's potentially fatal negligence. So too with vaccines — just because you've been gulled by an aggressive, high-profile field of pseudo-science doesn't mean you're not culpable for your actions.

Common Argument #3: This Is The Kind Of Pro-Vaccination Arrogance I Can't Stand

That was heavy on the stick and light on the carrot, I admit. But just as you clearly feel the utmost passion, drive and conviction to protect your child, from what you perceive as a pervasive public health menace, know that that's what I'm feeling too. I don't want to live in a world (much less a well-off country like America) that knows how to safely prevent awful diseases like measles and whooping cough, but can't agree to do so.

I understand how alienating and frustrating it can be to feel beleaguered and disrespected by the society at large, though, so please don't mistake the amount of derision and criticism directed at the anti-vaccination movement for a sneering pile-on. Because honestly, it's much more important than that — a society that has the same concerns you do, working for the same ends. And if you're open to the conversation, you might just realize you've made a terrible mistake.

Common Argument #4: But All Children Need Education, Including Mine

True enough, and all children need a safe education.

For example: If you learned your public school had been unaware of a sanitation issue that put kids at risk of a measles-style illness, you'd probably be furious, and rightly so. Even were it an honest, entirely unwitting mistake or accident, a call for increased diligence to keep our kids safe would be obvious. Now, imagine how you'd feel if the school made a conscious choice in favor of this risky exposure, insisting they thought it was ultimately better for health.

You'd probably feel outraged, betrayed and frightened — exactly how all of us feel when diseases we conquered years ago come back in force. Simply put, if you actively decide to leave your child vulnerable to dangerous, preventable diseases, home schooling might reasonably be the most responsible option, both for them, and for all of us. I hate to say it, since it's basically punishing your child for something you did, but c'est la vie.

Common Argument #5: What If I Told You This Was A Matter Of Faith?

I'd have to ask what religion you belong to. Because as it turns out, not very many faiths take issue with vaccination. Even Christian Scientists, who eschew medicine in favor of prayer, aren't overtly opposed to them — their founder actually encouraged her followers to get vaccinated in accordance with the law, then "appeal to the gospel to save him from bad physical results."

You'd also need to explain why a place like Marin County, California has such high rates of non-vaccination at the same time as it's so heavily atheist. That's right — according to the 2010 U.S. census, Marin boasts a population that's 56 percent non-religious.

Basically, the cat's already out of the bag. It's been an open secret for years now that anti-vaccination exemptions are painfully easy to get, and many parents have done so by faking religious objections. In Australia, in fact, it's even worse — anti-vaccination proponents are launching a fake church in order to avoid the country's new requirements, the so-called "Church of Conscious Living."

Common Argument #6: But I Can't Home School, And I Can't Afford Private School

Then you should probably have your child vaccinated. In fact, even if you were able to send them to one of these affluent Los Angeles-area private schools — where some non-vaccination rates are worse than those in impoverished, war-torn South Sudan — it'd be even more important, because there's no herd immunity to protect your vulnerable offspring.

Obviously, you can't be forced to do the right thing, unless the building momentum for mandatory vaccines across the board ultimately comes to pass — a remote chance at best, I'd wager. Basically, just as has happened with many doctor's offices across measles-stricken California lately, people are having to make the hard choices about excluding non-vaccinated kids to protect their broader populations. It's okay if that upsets you, but please don't act like it's our fault.

Common Argument #7: What Gives You The Right To Tell Me How To Raise My Child?

It's a difficult situation when everyone's child is involved (and I haven't even been mentioning how important herd immunity is for the elderly). And, as I mentioned before, it's altogether different when dangerous parental negligence is involved.

Consider if you were, say, a hardline anti-GMO activist. Maybe you believe that eating GMO foods will cause your child to go into cardiac arrest. But what if you were in a position where no organic, non-GMO foods were available for a few weeks? Would you still withhold the forbidden food? Are we all meant to sit back and watch while your child starve?

The anti-vaccination approach seems a great deal less cruel than that, largely because it isn't a surefire probability — a child without food will always starve, while some unvaccinated children will manage to never get sick — but some number of children will absolutely die when they didn't have to, as well. I believe there's a responsibility to prevent that, given the demonstrably proved safety of modern vaccination. I hope, someday, that you will too.