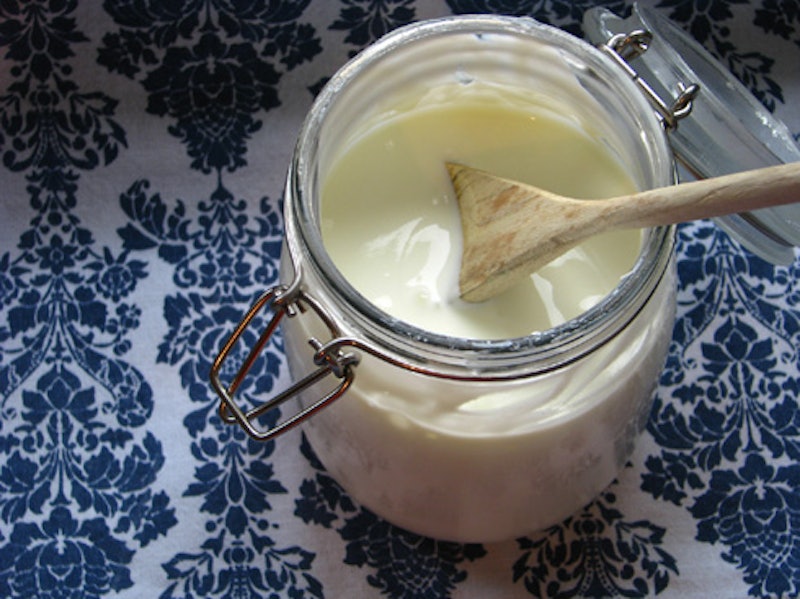 You've heard of probiotics for your stomach and intestines — but what about probiotics for your vagina? It turns out it's possible to make probiotic yogurt using cultures from your own vagina — but it might be safer if you don't. Luckily, though, somebody else already tried it so we don't have to: VICE Motherboard's Janet Jay recently wrote about her friend Cecilia Westbrook's attempts to create vagina yogurt, and believe you me, it's quite a read.

Jay and Westbrook (the latter is an M.D./Ph.D. student at the University of Wisconsin, Madison) had jokes about the idea in the past — after all, it's not unheard of for probiotics ingested orally to make their way to the vagina — but when they found no trace of anyone ever having tried it before (including in medical literature), Westbrook decided to put her scientific knowledge to good use. Hundreds of different types of bacteria and organisms live in each vagina, taking on the important role of producing substances that keep their home (that is, your ladybits) healthy. One of the bacteria that exists down there — the dominant one, in fact — is called lactobacillus. Incidentally, notes Jay, this is the same one sometimes used to culture milk, cheese, and yogurt.

You can see where this is going, right?

Westbrook gathered the necessary ingredient using a wooden spoon and set to work. But were her experiments successful? Well… sort of. Although Westbrook did manage to make two batches of yogurt using her own natural flora as the culture — the first batch “tasted sour [and] tangy,” while the second was more akin to “slightly-spoiled milk” — according to two experts to whom Jay spoke, it was a relatively risky project to undertake. Larry Forney, a microbiologist at the University of Idaho, said, “When you take vaginal secretions, you're not just taking the lactobacilli. You're taking everything.” As such, it's possible that “what you're using in your yogurt is no longer dominated by lactobacilli but other bacteria, some of which could be pathogenic” — and in fact, eating it could result in things like yeast infections. Furthermore, Theresa Eisenman of the FDA's Center for Food Safety and Applied Nutrition told Jay, “Vaginal secretions are not considered 'food,' and they may transmit human disease. A food product that contains vaginal secretions or other bodily fluids is considered adulterated.”

Westbrook, however, may have been onto something by using bacteria from her own vagina (as opposed to just any vagina). Forney noted that because every woman has a different balance of bacteria and lactobacilli, probiotics made from vaginal secretions might not be universally useful — BUT, if someone developed probiotics that could be customized to each woman's vaginal flora? That might up their effectiveness.

You can read more about the whole experiment over at Motherboard, but the bottom line is this: Making DIY yogurt using cultures drawn from your own vagina is probably a bad idea. Even so, though, it probably wouldn't be entirely fruitless if future research tried to figure out how to make customizable probiotics geared towards keeping women's vaginas in shape. In the meantime, may I suggest making one of the yogurt recipes below instead? No vagina harvesting required!

The Brown Eyed Baker will walk you through the process of making your own Greek yogurt in a jiffy.

2. How to Make Yogurt at Home

The Kitchn's method is super simple — no fancy equipment required.

Hey, it's still yogurt, right? The Messy Baker has the recipe for this tasty treat.