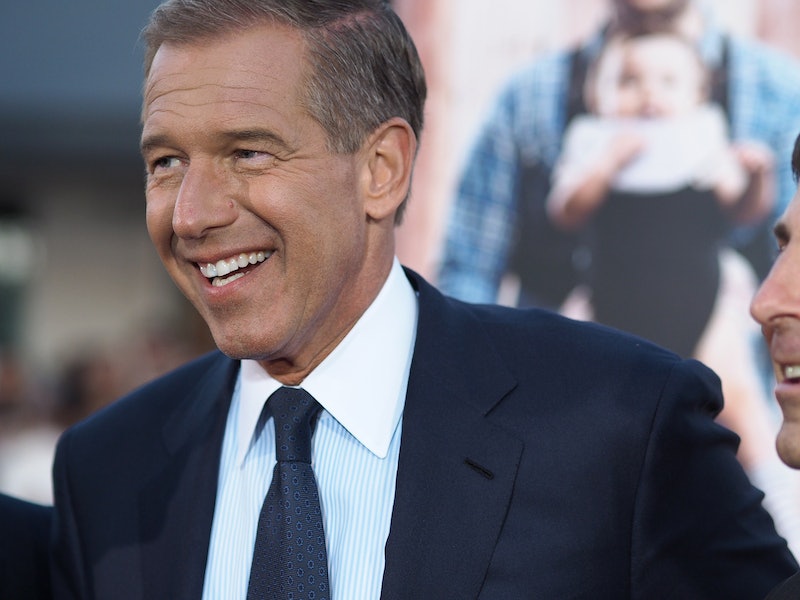 Embellishing a story to make it more interesting is a deeply human trait, but in an industry whose purpose is to report the news, there is no room for exaggeration. Following the revelation that Brian Williams' fabricated parts of his Iraq war story, the NBC anchor has gone from one of America's most beloved journalists to possibly looking at the end of a once stellar role in American media.

The public unraveling of Williams' career has been both fascinating and painful to watch. After the NBC Nightly News anchor admitted that he was not — as he had previously claimed on several occasions — actually in the helicopter that was gunned down in Iraq, Williams has faced public ridicule and castigation for his conflation of the events that took place.

As the anchor announced that he would temporarily step down as NBC investigates other past claims, Williams' standing as the 23rd-most-trusted person in America fell to No. 835, as of Monday. If his show's ratings and his likability hinges on his trustworthiness — and it does — NBC's decision to keep Williams or not is likely to depend largely on this new research findings. But doubts about the anchor's other stories have also emerged — perhaps proving to large for the network to contain.

Williams' reporting on Katrina, following his recent promotion to anchor, won him a prestigious Peabody Award. Reporting from the New Orleans French Quarter, the city's convention center and the Superdome, Williams and his team were hailed for exemplifying "the highest levels of journalistic excellence in reporting on Hurricane Katrina," according to the Peabody Awards website.

But his accounts are now being called into question — did Williams see a man jump to his death from the fourth level in the Superdome? Did he watch a body float past his Ritz-Carlton hotel window, although much of that area in the city remained dry? And most importantly, was his swanky hotel, located in the French Quarter, overrun by marauding gangs? Three separate individuals told reporters that no such gangs had attacked the Ritz-Carlton.

A story that Williams has told about being robbed at gunpoint in the 70s while selling Christmas trees from the back of the truck might have tugged at some heartstrings, but a longtime restaurateur challenged his story recently. Daniel Murphy Jr., who has lived in Red Bank, New Jersey — where Williams said the incident took place — for decades, said that the sleepy area "just wasn't like that" during the time.

Williams detailed the incident in a 2008 interview with New Jersey Monthly magazine:

I even sold Christmas trees out of the back of a truck in Red Bank. That wasn't a bad job, until a guy came up and stuck a .38-caliber pistol in my face and made me hand over all the money. Merry Christmas, right? Of course, I suddenly appreciated the other jobs I thought I hated.

But Murphy told USA Today that it was strange how Williams remembered the exact caliber of a weapon pointing directly in his face.

Discrepancies have emerged from Williams' reporting on the 2006 Israel-Lebanon war — he first told of Hezbollah rocket fire passing "just beneath" his helicopter, but then in later interviews suggested that they were close, but not quite as close as he first claimed.

While the network continues to look into its former golden boy's claims, Williams' fall from grace serves as a reminder for those in the media that they are held to a higher standard of truth by the public — and though Williams has largely honored that standard, this scandal proves that one mistake could dismantle an long, outstanding career in journalism.