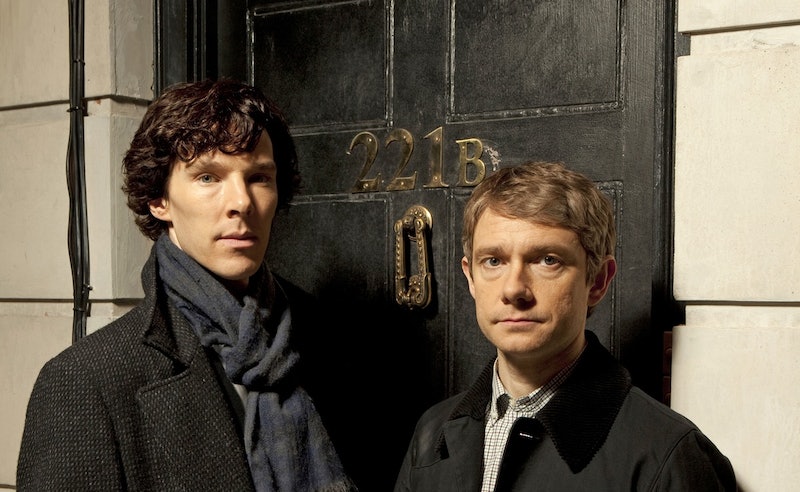 The show may only have three seasons under its belt, but believe it or not, the first episode of Sherlock "A Study in Pink" premiered almost five years ago back in 2010. That's a pretty long time considering the series has a total of nine episodes to its name. But Sherlock, much like the man himself, has always been a bit of an odd duck. (And extremely captivating and swoon-worthy duck, mind you.) Running at roughly 90 minutes per episode, each installment has felt like mini-movies, all eventually culminating into one super sleuthy storyline. However, there are some things that even the most obsessive (or should I say "Sherlocked") fans may have missed along the way. Which is why I took it upon myself to re-watch the Sherlock pilot and see if I stumbled upon anything I'd never noticed before. And sure enough, I absolutely did!

Not that I should really be surprised by this, of course. I mean, after years of detective work (or rather watching others carry out detective work) those observational skills were bound to rub off at least a bit. And now that I've revisited the episode where it all began, it's like seeing the show with a brand new set of eyes, especially in light of everything I know eventually comes to pass later on for Mr. Holmes and Doc. Watson. Because, if you look close enough, there have been little clues hidden along the way, even since Day 1. That said, here's everything you may have missed from the Sherlock pilot.

The entire concept of this guy's killing style was very telling indeed. Because he didn't technically kill anyone — he convinced his victims to kill themselves. Kinda like how Moriarty convinced Sherlock to willingly fall to his "death" at the end of Season 2. So, as it turns out, we knew his endgame all along.

Within the first few minutes no less. Or had you forgotten Watson's very-telling coffee mug?

Watson Fell Just As Hard For Sherlock As We Did

Seriously, he can not stop praising Sherlock for his deductive skills and it's completely adorable. This bromance was immediate right from the start.

Sherlock Was the Original Christian Grey

Fifty Shades of Grey wasn't published until May 2011, so Sherlock's little whipping experiment with a riding crop (for research purposes, of course) served as a sort of preview for what would one day be the foundation of an entire franchise. Welcome to the very first Red Room of Pain.

Watson Initially Had a Cane

He's gone so long without it, I almost completely forgot he ever had it to begin with. Naturally, it turned out to be purely psychosomatic — a condition his friendship with Sherlock managed to fix in no time.

Sure, it doesn't add up to much plot-wise, but I still appreciate the fitting decorative choice nonetheless. (Do you think the other side of the pillow has a smiley face perchance?)

If memory serves, this is the only time his particular get-up was part of their crime-solving wardrobe. Further proof as to how Sherlock ends up skewing Watson's views on the importance of rules and regulations. Bless him.

The Pills Don't Add Up

If you recall, at the end of the pilot, Sherlock gets presented with two pills in two different bottles, leaving him to decide which one was fatal and which one wasn't. The cab driver claimed this is the option he presented to all of his victims. Why then, at the beginning of the episode, do we see all of them with three pills all in the same bottle? Did he still take one of the pills himself? It just doesn't fit with his story. Not that I expected to hear a ton of logic coming from the mind of a serial killer, but come on dude. Get your story straight.