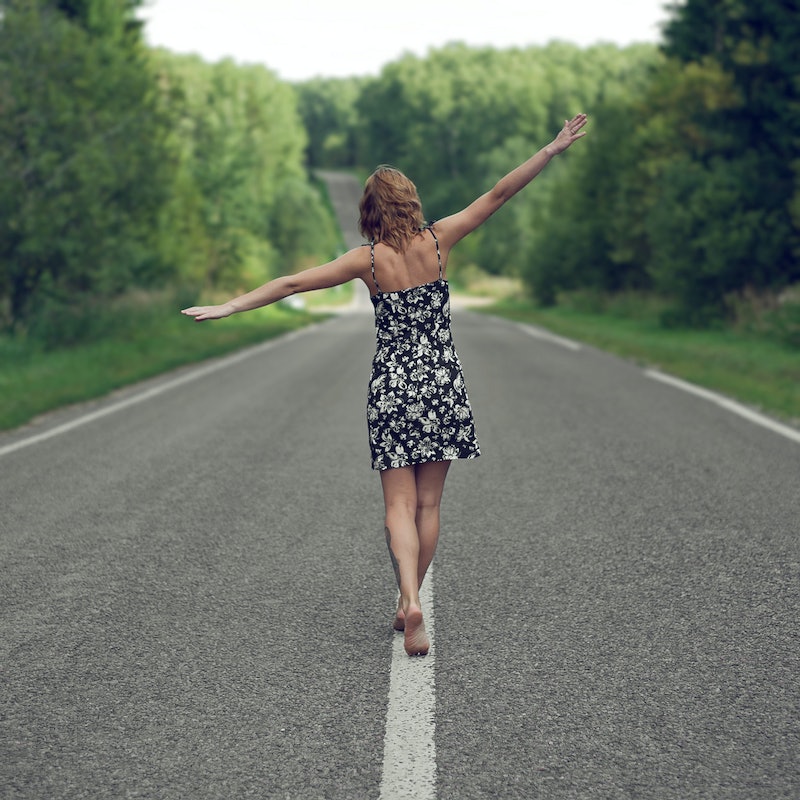 A year and a half ago, I moved from a small town to a major city, and one of the best aspects of the move has been that I am, for the first time in my life, able to live without a car. For many Americans, having a car is simply a way of life; when I was growing up in a small city in Texas, it was nearly inconceivable that one would walk anywhere, even if the destination were only a few blocks away. This reliance on cars was rooted in certain practical issues—such as my hometown’s lack of a dense city center and the sweltering Texas heat—but I think a lot of it was simply habit. As gas prices go up and folks become more aware of the dangers of climate change, people are looking more and more for alternative modes of transportation, including the kind provided by our own two legs. I have to say that not once in the last year and a half have I regretted giving up my car. Since I began relying on walking and public transportation to get around, life is generally easier, happier, and way, way cheaper.

Of course, it’s hard—and, for some, impossible—to live without a car in cities that lack efficient public transportation, a problem that plagues many sprawling metropolitan areas across the U.S. But even if you can’t give up driving entirely, think about ways that you can substitute some of your shorter drives with walking or cycling. You’ll still get many of the same advantages listed below, including fresh air and exercise, helping the environment, and saving cash on gas. Keep reading to check out how going carless might make your life better:

1. You save tons of money

Cars are crazy expensive: you have a car payment, insurance costs, maintenance, and gas. If you live in an urban area, chances are you also have to pay for parking, which can add hundreds of dollars to your monthly expenses. All of that adds up to thousands of dollars a year that you could be spending on more important stuff, like neoprene jumpsuits and wine.

2. You get effortlessly fit

Walking is great exercise, and, unlike running and many other high impact sports, it carries a very low risk of injury. We all know how hard it can be to carve out time to workout—if you’re walking everywhere you go, you’re at least getting some regular exercise throughout your day.

3. You don’t have to dig your car out of the snow

It might seem counterintuitive for me to say that it’s great to not have a car in the winter—after all, trudging through the snow on foot isn’t exactly a picnic. But having a car in a cold climate is hard work, especially if you aren’t able to keep your car in a garage. Every morning, I thank my lucky, carless stars as I watch people digging their cars out of the snow, chipping ice off their windshields, and waiting in the cold for their engines to heat up—and all of that before they have to drive in the snow and ice. No, thank you. My own freezing 10-minute walk to the metro station is totally worth it.

Driving a car is stressful. Dealing with traffic, delays, and terrible drivers is the perfect recipe to send your blood pressure skyrocketing and your rage spiking. There are of course unexpected delays when you travel through public transportation, but these delays tend to be a lot less stressful because there is simply nothing you can do about them. Commuting via public transportation can even become a relaxing part of your day because, instead of doggedly navigating traffic, you get to sit and listen to music, read, or just zone out.

5. You don’t need a designated driver

If you don’t have a car, you don’t have to be responsible for driving. So when you hit the bar, you can live it up as much or as little as you want—either way, you know you’re walking or cabbing it home.

According to National Geographic, vehicles produce about one third of U.S. pollution. That’s a lot! By living without a car, you can do your bit to help the environment, and you can feel as smug as you like about it. Short car trips are particularly bad for the environment because they burn fuel and create pollution at higher rates than long trips. If you can’t give up having a car entirely, try to replace your shorter journeys with walking and cycling. The earth will thank you.

7. You get to know your neighborhood

There’s no better way to get to know your neighborhood than by walking all over it. Exploring your area on foot, you’ll find cool little enclaves and parks, hidden public art, and small, locally-owned shops. When you discover everything that your own neighborhood has to offer, you might find yourself being less motivated to travel long distances to big box stores in other parts of the city.

8. You can hang out / live in the coolest parts of your city

In a lot of cities, the most exciting neighborhoods are the ones that are densely packed with restaurants, shops, and living spaces, and—no surprise—these areas usually have extremely limited parking. Not having a car makes these places much more accessible, whether you’re just going to hang out or you’re taking the plunge and living in one of them.

On the whole, I am thrilled not to have a car, but I have to admit, there is one thing about driving that I really miss: being able to sing to terrible pop music at the top of my lungs where no one else can hear me. There are simply very few places where terrible singers like me can really let loose with the vocal cords, and public transportation is not one of them. That said, all of the advantages listed above for the price of a little over-emotive car-singing? It’s more than a fair trade.

More like this
An Open Letter To The Person Who Bought Steve Jobs’ Birkenstocks For $218,000
By Ginny Hogan
8 Money Saving Experts To Follow For Accessible Advice
By Maxine Harrison
Anguilla Is The Under-The-Radar Caribbean Destination You Need To Visit
By Rachel Lapidos
The 5 Best Pillows For Acid Reflux, According To A Sleep Expert
By Maria Cassano
Get Even More From Bustle — Sign Up For The Newsletter