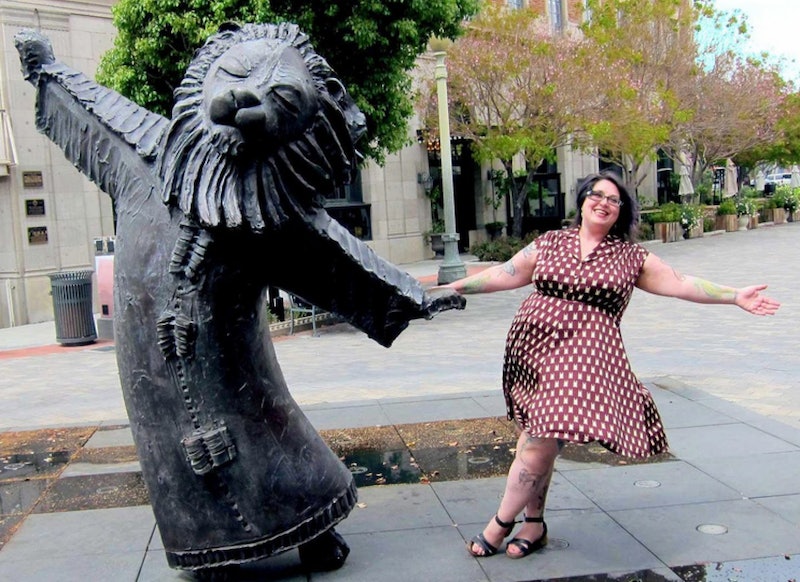 During this fall’s New York Fashion Week, history was made.

No, I don’t mean Marc by Marc Jacobs officially bringing back the blue eyeshadow or even Oscar de La Renta making a dress look like a beehive and making us all want to wear it. I’m talking about the fact that the first ever plus-size designer was able to show her collection at the Fashion Law Institute’s multi-designer presentation. If you haven’t already, meet Eden Miller and Cabiria Style, self-described as “whimsical, sensual style in sizes 12-24.”

As a plus-size woman, fashion blogger, and all around curve enthusiast, I was thrilled when I heard the news. It was another step in the direction of plus-size acceptance — and that it was happening at New York Fashion Week, a place where designers, collections, and models typically embrace androgyny and hard angles as opposed to curves and femininity was monumental. I still think it was a magnificent feat to accomplish, and my kudos go out to Miller and all the Cabiria girls for introducing fat to Fashion Week.

But because I’m an overall pessimist masking as a realist, even when seemingly awesome things happen, I can’t help but maintain my reservations and skepticism. I can’t help but wonder what exactly Cabiria Style’s designs, with their traditional structure, hems and cuts, are going to do to plus-size acceptance within the fashion industry, or even to plus-size women as a whole. Sure, maybe other designers will finally have that light bulb moment and realize that adding plus-sizes will only increase their revenue and likability. But on the other hand, those others designers may think what plus-size women want is the Cabiria style. And maybe that’s not such a great thing after all.

When Cabiria’s show launched, it was met with soaring reviews. Liz Black of Refinery29 said:

Miller threw out all those antiquated notions on what women can or can’t wear. Her collection was filled with vibrant colors, large graphic prints and aggressive florals — all things have typically been old school no-nos.

Although I agree that many of the patterns are indeed bold and colorful and have something of a 1960s flower-power feel to them, I would be reluctant to say that Miller has actually thrown out “all those antiquated notions” or any of the “no-nos” for plus-size women other than the pattern part.

The thing about Cabiria is that though the patterns may be bold, the style and cuts of the dresses are not. They do everything fat girls are told to do: highlight and accentuate the boobs and the waist, cover the hips and the belly through flowing, loose apparel, and make sure you never show too much thigh. Miller’s goal was probably never follow all the rules plus-size women are told to follow — but in her efforts to create flattering and designer-quality pieces, the plot may have somewhat been lost.

This wouldn’t be a problem if the plus market were infinitely bigger and more varied than what it actually is — but the main brands putting out unique and in-trend pieces for bigger gals are essentially limited to Domino Dollhouse, ASOS Curve, and ModCloth. The moment a plus designer actually makes it to NYFW, you hope you’ll come out of it feeling like, “Yes! Finally someone gets that us chunky chicks want cool clothes just as much as anyone else.” So when instead you’re left feeling like, “I already know I’m supposed to hide my flabby bits; leave me alone” it’s a pretty big downer.

The Daily Mail called the show “a victory in a size zero war.” Huffington Post said that Cabiria will “hopefully play a role in forcing more clothing lines to be accepting of potential plus-size customers.” And the inevitability of this kind of show is that designers will have to think about the plus market. That a designer specializing in sizes 12 to 24 has made it to the ranks of those specializing in 0 to 12 just has to make people think. But the fear is that when people do think about it, and when those straight-size designers consider incorporating plus into their world, they may be left with the styles and cuts of Cabiria in their minds, and they may think that those are the styles they should embrace – because they are safe, and “flattering” and classically chosen by curvy women to hide every single curve.

The bigger fear is that when curvaceous women see the Cabiria designs and think about how finally a plus line was good enough for New York Fashion Week, they will assume that those designs must be the best — that they must be the quintessential embodiment of what plus-size women should be wearing.

The Cabiria designs are beautiful — they really are. Many of them are so bright, you can’t help but want to wear them in the hopes that you’ll trick yourself into thinking it’s still summer. But truthfully, we’ve seen then before — maybe not the patterns, but certainly the styles. We’ve been told to wear them a billion times by fashionistas and “do and don’t” specialists. We’ve been told to hide the fattest parts of our bodies.

So I guess the hope now that Miller has made a name for herself is that she’ll really go the “whimsical, sensual” way with Cabiria. Maybe she’ll add some body-hugging pieces — some pieces that really scream out, “I’m fat and I rock” other than, “I’m fat and…well, I don’t really want to show it.”