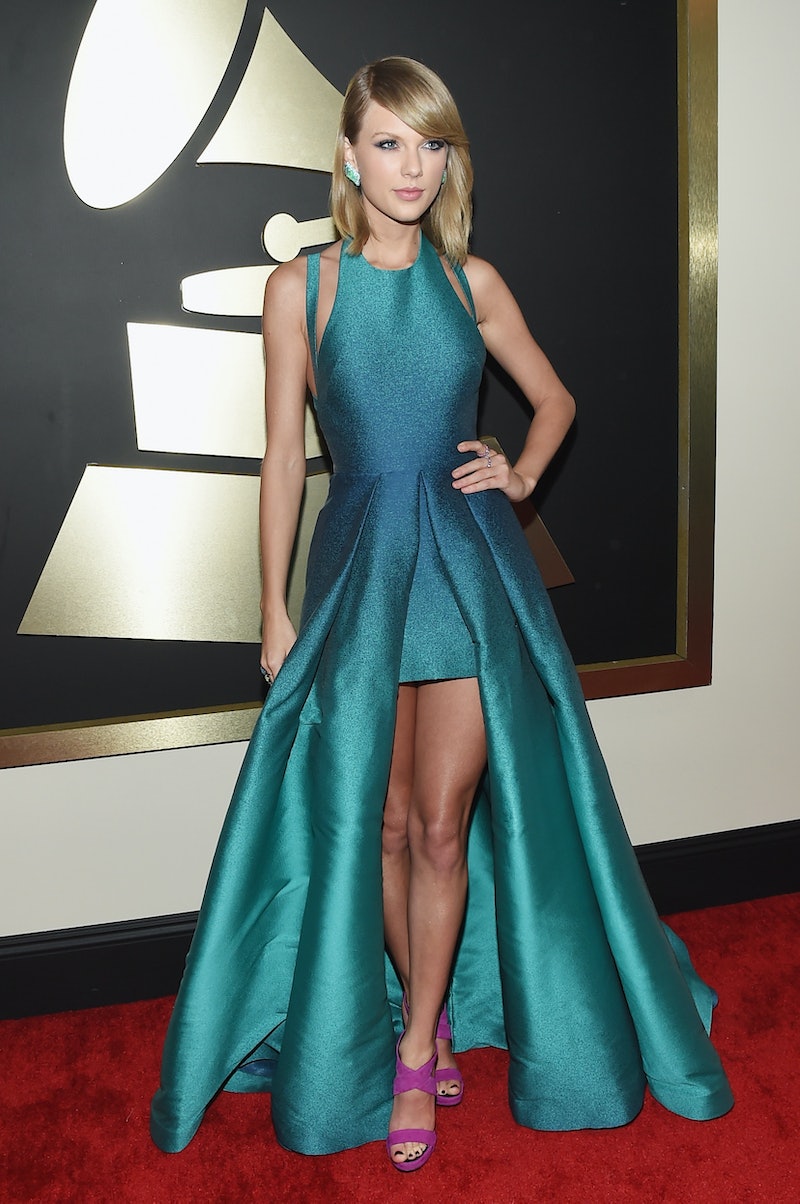 In case you missed it: Taylor Swift shut down a reporter's sexist remark on the red carpet at the 2015 Grammy Awards on Sunday, and it was awesome. While interviewing Swift, Entertainment Tonight's Nancy O'Dell asked the camera operator to pan down so that viewers at home could see the entirety of the "Shake It Off" singer's stunning teal dress. So far, so good, right? Right. However, things went off the rails just a moment later when O'Dell said to Swift:

I just wanted to show the legs, 'cause as I was telling you ahead of time, you're going to walk home with more than maybe just a trophy tonight, I think lots of men.

Wait, what? She said that Swift was going to go home with a bunch of dudes at the end of the night? What the hell was she thinking? I have no idea. Amazingly, Swift was able to keep her cool (though she certainly didn't have to!) while swiftly (sorry, I couldn't help myself) and succinctly shutting O'Dell down:

I'm not going to walk home with any men tonight. I'm going to go hang out with my friends, and then I go home to the cats...

The subtext of O'Dell's bizarre statement is, of course, that because Swift is a woman, her number-one priority at all times should be to attract the attention of as many men folk as possible. That's what life is all about, after all: impressing men! Never mind that Swift was up for three major awards at music's most prestigious award show — her simple girl brain should've been focused on how many guys she'd be able to lure back to her hit songwriting lair when it was all over. Because, as we all know, Swift is this insatiable, boy-crazy maniac. She just can't help herself!

Now, Swift could've taken things a step further and confronted O'Dell directly about her sexist remark, but it's not easy to think on your feet — especially after you've just been ambushed. And judging by Swift's facial reaction, she was definitely taken by surprise:

Yeesh. If looks could kill. Hopefully, O'Dell will learn from her mistake and Swift won't have to deal with this kind of garbage in the future.