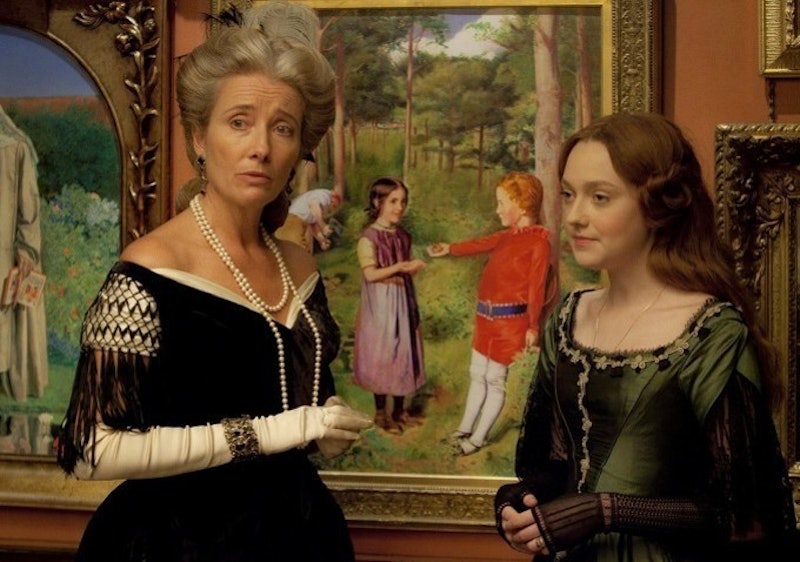 I’ve devoted many years of my life to the study of 19th-century British literature and culture. I love this period for many reasons: it is the historical era that brought us some of the greatest literature ever written, works that transformed the way we tell stories and the way we understand the human mind. This is the century that brought us literary greats like Jane Austen, Charles Dickens, Charlotte and Emily Brontë, George Eliot, and Thomas Hardy, to name but a few. Although I would like to be able to say that my love for all things 19th century springs from my devotion to high cultural forms and greatness of thought, I can’t: One of the main features of the era that keeps me hooked is simply the fact that people back then were fantastically, fascinatingly, startlingly weird.

Of course, all historical ages seem bizarre in light of the present; people of the past experienced life differently than we do now, and it’s impossible for us to fully imagine what it would have been like to live without the cultural and technological markers that define our own era. I’m sure that in 200 hundred years, when humans have had computers implanted in their brains and travel occurs via flying cars, the 21st century will seem completely insane. But what sets the British 19th century apart—for me at least—is that it has just the right proximity to us to seem at once totally strange and also oddly familiar. Many aspects of 19th century life would be entirely foreign to us, but people of that era were also dealing with issues that continue to reverberate in our own age: industrialization, revolutions in transportation and communication, new developments in science and evolution, major conflicts related to class, gender, and sex. In short, shit was crazy.

The Victorians, in particular, have a reputation for being straight-laced, musty, old fuddy-duddies, but, beneath all that propriety and restraint, Victorian England was a churning with scandal, sex, and murder. (Not any more than now, necessarily, but aren’t these things more fun when they’re accompanied by corsets and top hats?) Here is just a sampling of some of my favorite 19th-century scandals to emerge from the ranks of the century's finest writers:

1. Mary Shelley kept her husband’s heart in a desk

Mary Shelley, who is most famous for writing Frankenstein (1818), was married to Romantic poet Percy Bysshe Shelley. When Percy Shelley died at sea near the coast of Italy in 1822, his body was cremated. Captain Edward John Trelawny, a friend of the poet, watched the body burn and later wrote, “what surprised us all was that the heart remained entire.” He pulled the heart from the fire, and what followed appears to be a bunch of squabbling between Shelley’s friends and widow over a the blackened organ; as Amanda Foreman for the Wall Street Journal writes, “For reasons of his own, Trelawny then handed his friend’s heart to the poet Leigh Hunt, who refused Mary Shelley’s entreaties to return it until he was forced to do so by Lord Byron.” When Mary Shelley finally got the heart, she apparently wrapped it in silk and put it in her desk, where it was found after her death decades later.

Also, the “heart” may have actually been Shelley’s liver. Nothing says “devotion” like keeping a liver in your desk, amirite?

Such was the description given to Romantic poet Lord Byron by Lady Caroline Lamb (more on her, below). Byron’s wildly popular poetry, combined with his good looks and magnetic personality, made him one of the first real celebrities of British literature. He was particularly notorious for his romantic and sexual escapades, which included a scandalous affair with Lady Caroline, liaisons with both men and women, an affair with Mary Shelley’s half sister, and a relationship with his married half-sister, Augusta. (He was in love with her, but there’s some disagreement about whether their relationship was sexual. Many scholars believe her daughter, Medora, was Byron’s.) In 1816, Byron left England amid rumors of incest, sodomy, and general licentiousness. Sounds like he’d be fun at a party.

3. That time Caroline Lamb stabbed herself and then sent pubic hair to Byron in a letter

Lady Caroline labeled Byron “mad” and “bad,” but she was pretty freaking crazy herself. Lady Caroline was married when she met Byron in 1812, and they had a torrid and very public affair. When he ended the relationship after four months, Lady Caroline was… less than happy (I’m sure it didn’t help that Byron eventually had an affair with her mother-in-law). At a ball they both attended, she broke a wine glass and tried to slash her wrists in front of him; she later sent him a letter filled with clippings of her pubic hair, signed "from your wild antelope." She also cast Byron as the villain of her 1816 novel Glenarvon, but that actually seems pretty tame... for her, at least.

4. John Ruskin was completely freaked out by pubic hair… or something

John Ruskin was one of the most prominent and influential art critics, artists, and social thinkers of the Victorian era, but many know him for his disastrous marriage to Effie Gray. Gray married Ruskin at the age of 20 in 1848; six years later, she was granted an annulment because, for reasons that remain unclear, the marriage was never consummated. Gray wrote that Ruskin never had sex with her because “he had imagined women were quite different to what he saw I was” and suggested that “the reason he did not make me his Wife was because he was disgusted with my person.” Ruskin confirmed that he didn’t consummate the marriage because he found something wrong with Gray’s body, writing that “though her face was beautiful, her person was not formed to excite passion. On the contrary, there were certain circumstances in her person which completely checked it.”

What these “certain circumstances” were remains a mystery, through scholars have suggested that Ruskin—who was used to seeing women as they were depicted in paintings and statues—may have been shocked by the sight of Gray’s pubic hair or menstrual blood.

Gray went on to marry Pre-Raphaelite painter John Everett Millais, who—drama!—also happened to be a friend of Ruskin’s (that’s one of his paintings of her, above). She and Millais went on to have eight children, so whatever Ruskin found objectionable about her body was evidently not a problem for the painter. (There's also a recently released movie about all of this, starring Dakota Fanning as Effie Gray.)

5. D.G. Rossetti buried his poetry with his dead wife—and then dug her up again.

Dante Gabriel Rossetti was a Pre-Raphaelite painter and poet. He had a tempestuous romantic relationship with his muse Elizabeth Siddal (that’s one of his many paintings of her, above); they were together for almost a decade—repeatedly getting to the brink of marriage before being thrown back by Rossetti’s indecisiveness—before finally marrying in 1860. Less than two years later, Siddal died of an overdose of laudanum (a mixture of alcohol and opium commonly used as a painkiller). There have been many suggestions, though no definitive proof, that the death was a suicide. Whatever it was, Rossetti blamed himself for Siddal's death and her unhappiness, and, as penance, declared he was done with poetry, and to prove it, put his latest notebook of unpublished poems in the casket with her.

Seven years later, Rossetti regretted the decision, and he had her coffin dug up—I repeat, he had his dead wife dug up— so that he could retrieve the poems. Rumor has it that the Siddal’s famous red hair had kept growing in the intervening years, and that the coffin was filled with the coppery locks when they opened it. That’s probably not true, of course, but still. Eww.