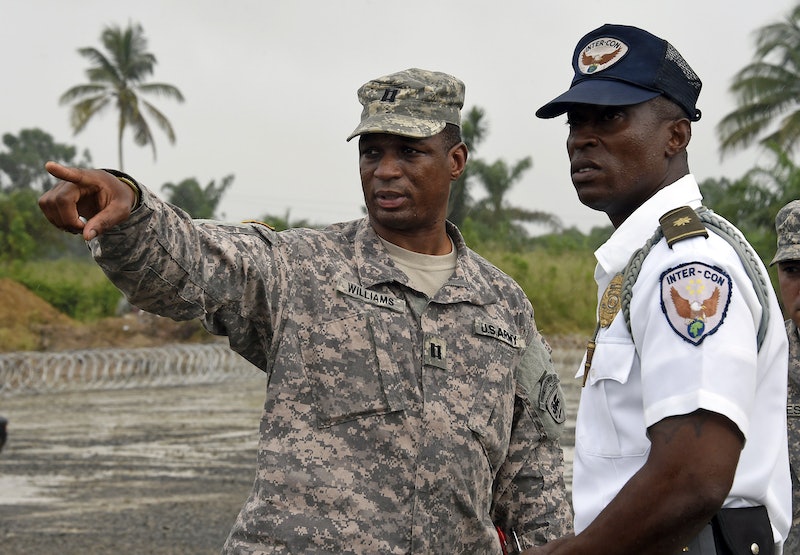 Criticism surrounding the president's handling of the Ebola outbreak last year came fast and hard, and now as President Obama prepares to withdraw the vast majority of military troops fighting the disease in West Africa, naysayers are again expressing concerns that his celebration may be premature. Despite the Obama administration's insistence that the success of the campaign proves that his response was, indeed, appropriate, some are still concerned that the deadly illness has yet to be defeated. Still, there is significant evidence to suggest that the outbreak has slowed, with only a dozen cases reported in hard-hit Liberia in the last three weeks. During the peak of the epidemic, well over 1,000 cases were reported each week.

By April 30, all save 100 of the 2,800 military personnel deployed to West Africa to fight the disease will have returned home, and more than half of the troops are already back in the United States. In the 10 months during which Americans maintained a military presence in the region, representatives built 15 Ebola treatment units, trained over 1,500 health workers and managed to raise more than $2 billion worldwide to help combat Ebola in the countries worst affected by the virus. The United States itself poured some $400 million in efforts to control the disease in the region. Ron Klain, Obama’s Ebola response coordinator and the man dubbed the "Ebola czar," told The New York Times on Tuesday, "We are at a bit of a pivot point in this, where we have bent the curve of the epidemic, stopped the exponential growth and have the number of cases down. That is a tremendous achievement to be proud of."

Overall, Ebola cases have dropped by a significant margin of 80 percent, and U.S. Agency for International Development Administrator Rajiv Shah called the new numbers "extraordinary," telling the Associated Press that American efforts have been well received and have paid off in kind. But still, American officials are wary of deeming the situation a decisive victory, as West Africa is still not entirely Ebola-free, and given the highly contagious nature of the disease, there remains some room for error.

Klain noted to the Times, "This epidemic is far from over," and while he will step down on Friday, having successfully completed the bulk of his responsibilities, he maintained, "There’s a lot of work left to be done. We have to get all the way to zero, and we’re not going to stop until that’s achieved." David Nabarro, the United Nations special envoy on Ebola, echoed these sentiments from Geneva, telling reporters,

Good progress is being made, but the outbreak still represents a grave threat. And we really hope that there will be no complacency in anybody involved in the response. We have to really work hard to get zero cases, zero transmissions.

This goal is still a long ways off, particularly in Guinea and Sierra Leone, where progress has not been nearly as marked as in neighboring Liberia. In the last few weeks, Guinea has seen a small but noticeable rise in the number of cases, and while Ebola is on the decline in Liberia, the drop-off rate has plateaued, raising red flags for many experts and health officials. Consequently, President Obama is also expected to announce a contingency plan in addition to his decision to pull troops out of West Africa as a safeguard against a reemergence of the disease.

The Times reports that much of the new American strategy surrounding the disease will move away from isolation and safe burial practices, and concern itself more with a tracking "patients and their contacts on a case-by-case basis." Testing laboratories will also remain open and monitored by the 100 troops who remain in the area, though some of the American-built facilities will undergo a transitional phase and focus more on preventative care than immediate emergency services and direct treatment. Still, with just a handful of Americans on-site to oversee the premises, some are concerned that West Africa would again be woefully unprepared should another breakout occur.

Of course, while American troops will no longer be on the ground in as great of numbers, Obama is expected to remind audiences that this pullback does not signify the end of American involvement in the containment effort. The president's request for $6 billion emergency financing package from Congress last year won bipartisan support, and there are still significant resources allocated towards eradicating the disease. Indeed, some 10,000 doctors and medical staff across West Africa are currently being funded by the US government, and much of the work previously carried out by troops will now be transferred over to the hands of civilians in the area.

The Ebola outbreak, the deadliest in history, has claimed over 9,000 lives, and while this is a far cry from the worst case estimates cited by some public health officials, who claimed that the virus would kill 1 million individuals by the end of January, the disease remains a major threat. So even as we celebrate our troops' homecoming, our lack of skin in the game does not signify the end of the struggle.