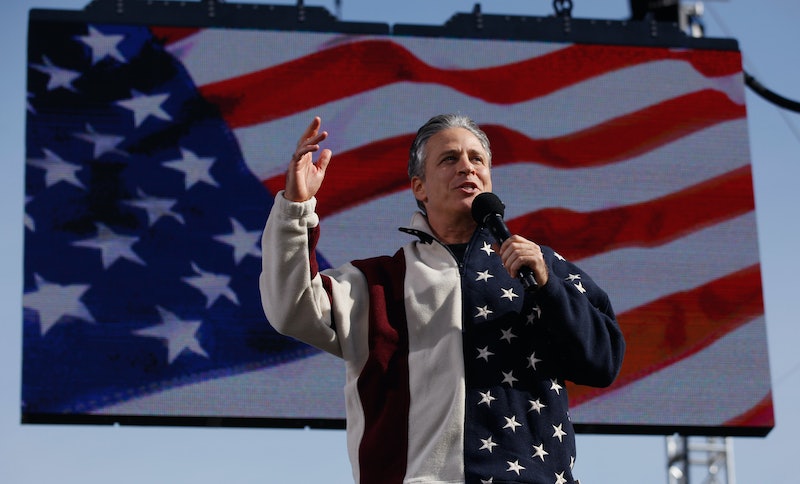 In the wake of Jon Stewart's announcement that he'll resign from The Daily Show at the end of the year, political writers and pundits across the nation are beginning to pay tribute to the fake anchor's real impact on politics. CNN writer Stephen Collinson noted, "To gauge Jon Stewart's impact on American politics, try to imagine a presidential election without him." While his point is that Stewart has been so ingrained in the American political process that he'll leave a void in election coverage when he's gone, his comment also raises a new, much more exciting question: What if he were involved in the presidential election in a different way? What if Jon Stewart ran for president in 2016?

It may sound like a pipe dream for die-hard Daily Show fans, but if you think about it, the idea is not that insane. There are three glaring reasons Stewart could feasibly be president: he knows politics inside and out; he's a household name and beloved public figure; and he comes with a very loyal legion of fans who would translate into a desirable demographic of voters that real candidates struggle to appeal to. As Collinson points out, candidates often brave being lampooned on Stewart's show just to reach that pie slice of 18 to 29-year-olds.

And despite its satire label, The Daily Show delivers real news, and over the 16 years that Stewart has been at the helm, it's become one of the most influential news programs in the world. In other words, Stewart has real clout.

It seems, however, at least for now, Stewart is either unsure or staying mum on his next plans. Stewart told his studio audience on Tuesday night:

I don’t have any specific plans. Got a lot of ideas. I got a lot of things in my head. I’m going to have dinner on a school night with my family, who I have heard from multiple sources are lovely people.

But if he's open to taking suggestions, then I'd like to direct his attention to the outpouring of fans who'd like to see him make the big leap — into real politics. The hashtag #JonStewartForPresident is already trending on Twitter.

And over on Reddit, the same conversation was being had under the topic "Jon Stewart 2016?" One user wrote, "He would be better qualified than anyone," while another elaborated:

His knowledge on issues and ability to communicate, break them down simply and articulate the right way to do things is above all. He is not controlled by special interests.

Another user pointed out:

I looked forward to his Election Coverage more than the actual Elections.

That's probably how many young viewers feel, but this user one-upped that sentiment:

I look forward to his making fun of our fake democracy more than I enjoy living in one.

But perhaps this user had the best suggestion of the whole thread:

Only if Steven Colbert ran as VP.

Um, my mind just exploded. That would redefine "dream team" right there. So, if you're reading this, Mr. Stewart, might you at least think about it?